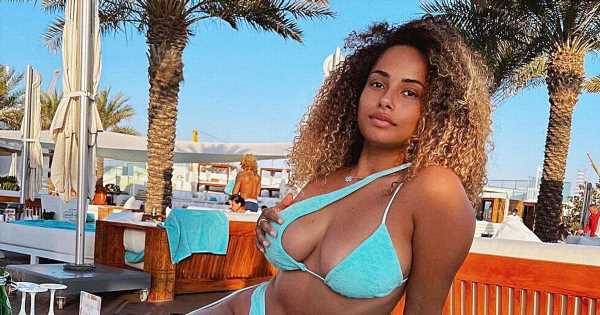 Love Island winner Amber Gill has revealed how she managed to wiggle her way out of taking part in the “disgusting” food challenges.

While Islanders settle back in to normal life in the main villa, viewers of the hugely popular ITV2 dating competition are excited to see the return of some of their favourite villa challenges.

As tensions soar in the Spanish mansion, fans have been begging for the return of the movie night challenge which sees the residents take part in a pop quiz in order to watch some of the scandalous clips taken while they were away.

Throughout the series, viewers have been gripped to the 24-year-old's constant commentary on the show and now the brunette beauty has revealed how future contestants can get out of participating in challenges they don’t like the look of.

Ahead of the launch of her new debut romance novel, Until I Met You, the star confessed during an exclusive interview with Daily Star how the food challenges were her least favourite to take part in during her time on the show.

She told the publication how the challenge used to make her feel physically sick, explaining: “The first challenge that we did was like a food fight dressed as brides and it was whoever had the cleanest dress won.

“And I remember I did that challenge and for the most part of the challenge I was just off to the side gagging because I hate anything like that.

“I really hate food and I don’t want food everywhere because it makes us feel physically sick and it was all mushed together and the smell was disgusting.”

Because of the likelihood of the star throwing up on set due to exchanging food from one person to another, the TV star confessed how ITV bosses compromised and let her present the food-based challenges moving forward.

She continued: “And so I remember for every single food challenge after that I was the presenter, I used to present them.

“I think the producers thought, ‘Well we’re not having her look like a frigging idiot off to the side just being sick so we’ll have to get her to present them’.

“So I used to present all the food challenges like the ones where they had to spit in each other’s mouth, I presented that one.

“And then there was one where they had to create a burger and I was presenting that one so yeah, I think I dodged a bullet by being so dramatic.”

She advised future contestants: “Sometimes being dramatic pays off.”

It comes as Amber prepares for the launch of her romance book – which hits the shelves on Thursday (July 7) – which follows the life of a young adult finding her way through life as a singleton at a wedding full of couples.

One thing the star pointed out which sets her book apart from many of the other romance novels on the market is the importance of strong friendships.

She explained: “One of the main messages [in the book] for me is definitely how important friendships and having a friendship group is.

“It’s just a really nice escapism, beachy read for if you want to take it on holiday or if you just want some niceness.

“I feel like we’ve got so much chaos going on in the world anyway so I wanted to make this so that someone had something nice to read, something light hearted.”