Model and influencer Ellidy Pullin knows all too well that personal tragedy won’t protect you, as a mother, from the judgment of others.

“One woman said, ‘That is the loudest baby I’ve ever heard’,” says Pullin about her eight-month-old daughter Minnie, with a chuckle. This was the other day, when the pair were on a long flight to Greece and Minnie screamed hard for a while.

“Do you know what she also proceeded to say? ‘That baby over there’” – Pullin motions with one hand to mimic the woman pointing to a baby in another row – “‘Is an angel.’” 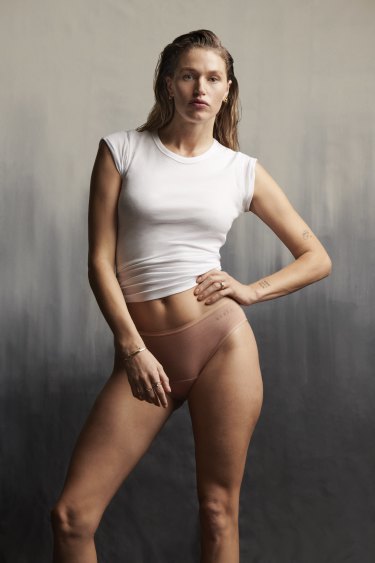 Pullin is reclining on a white sofa while speaking over a video call from Greece as she recalls the incident, which she now laughs off. It’s what she usually does, she says. “Honestly, I’m pretty calm most of the time,” says the model. She was rocketed into the public sphere nearly two years ago when her partner, three-time Olympian snowboarder Alex “Chumpy” Pullin, died in a spearfishing accident in Queensland.

At other times though, when people are making a fuss over something small, she can’t help but feel a storm raging inside. “I’m a little bit like, [thinking] ‘Do you want me to tell you what we’ve been through? F–ck, you’ve got no idea. This isn’t a problem. If you want a problem, I’ll give you a problem.’”

Because at 29, Pullin, who co-hosts the popular podcast Darling, Shine! with best friend and influencer Chloe Fisher, hasn’t just lost her partner. One month after Chumpy died, Pullin’s father Peter was diagnosed with aggressive brain cancer. He died in January.

“A lot of people look at her [Minnie], and are a bit like, sad face,” says Pullin, making a grimace. “Don’t do that to my kid. I don’t want to bring her up on sadness and grief. She didn’t lose Chump. We lost Chump. She never had him to lose him… She doesn’t feel the hole in her hearts that we do,” she says, referring to her family and Chumpy’s family and friends. “Obviously, she’s growing up with one parent, but I don’t want us to project our grief onto her. I don’t want her brought up on our shit.”

“She’s a miracle,” adds Pullin, of Minnie – full name Minnie Alex Pullin – who was conceived through IVF with sperm retrieved from Chumpy shortly after he died.

Pullin marvels at the primal love her daughter has for her. “She’s like this beefcake,” says the podcaster, who lives on the Gold Coast and is the new face of a Bonds campaign for its Damn Dry undies range, which caters to light bladder leaks. “She’s grabbing [my] mum’s shoulder trying to get to me, literally crawling up her back to get to me. [I think] ‘Oh my god, you really love me’. I have those moments where I’m like, ‘Wow, now I realise how much my mum loves me. And I feel a bit bad, I can be such a b–ch to you [her] sometimes’.”

Motherhood has also brought with it other unexpected challenges. In particular, how to rejoice in the birth of your child when a loved one is struggling to conceive.

“It’s really tough… and I was really worried about it,” says Pullin, referring to Chloe Fisher, who has been trying to conceive for more than two years. Pullin and Fisher underwent IVF at the same time. But while Pullin went on to have Minnie, Fisher has suffered multiple miscarriages and an ectopic pregnancy.

“We both want what the other has,” says Pullin. “She wants a baby, and I want my person back, my Chumpy back… I think it was really hard for her to handle other friends who were falling pregnant left, right and centre, especially those having kids that didn’t even really want [them].”

Fisher and her husband, Paul, are Minnie’s godparents. And though the two families are incredibly close – they’re about to spend a month in Ibiza together – their divergent fertility experiences have led to some tricky conversations.

“There was one time, they were seven weeks pregnant with twins, and then miscarried,” says Pullin. “So obviously, she’s [Chloe] calling me crying and, I live up the road, I was like, ‘I’ll bring you stuff’. I was like, ‘F–k’. I called back []and asked] ‘Should I bring Minnie or get mum to look after her while I come and cuddle you guys? I don’t want to rub it in’. I thought the last thing they’d want is to see a baby. But they both jumped on the phone, ‘We need her, we need her, she’s going to cheer us up.’”