Independent transport think tank The Rail Futures Institute is calling for the $35 billion rail loop to be delayed in favour of a proposal it calls the East-West Rail, which would create a third cross-city tunnel and connect Melbourne’s booming outer western suburbs with the CBD, Parkville and Fishermans Bend. 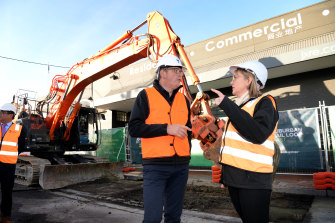 Rail Futures president John Hearsch said: “We’re saying to the government, slow SRL down – it doesn’t have the urgency that these projects do. What we’re proposing is something that has been badly needed for a long time.”

The first stage of the rail loop, consisting of six underground stations between Cheltenham and Box Hill – which the Andrews government announced from left field before the 2018 state election – has a budget of up to $35 billion and is set to open in 2035. A second section continuing through the north-eastern and northern suburbs to Melbourne Airport is envisioned by 2053, followed by a western section to Werribee.

Jonathon Marsden, chair of the Metropolitan Transport Forum – a coalition of 26 local councils – said it was critical the state’s commitment to the loop did not prevent construction of the Metro 2 from starting as soon as the first Metro Tunnel opens in 2025.

“It makes sense to redirect the [tunnel] boring machines and start the under-river crossing to link the jobs-rich corridor of the suburbs to the west of Newport with the new urban development at Fishermans Bend,” he said.

“Metro Tunnel, Suburban Rail Loop, the Western Rail Plan, Eastern Express Busway and our ongoing investment in the current public transport network is transforming the way Victorians move around the city,” she said. 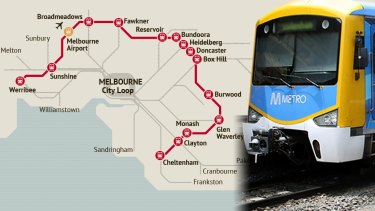 Heading west, the project would deliver Metro trains to Wyndham and Melton, which are currently serviced by V/Line services. The Werribee line would extend to Wyndham Vale and new stations would fill in transport black spots at West Werribee, Black Forest Road, Truganina, Tarneit North and Tarneit West.

Hearsch said the project replicated the best features of the Andrews government’s Western Rail Plan, announced before the 2018 election, which he said appeared to have stalled.

Professor Jago Dodson, director of RMIT’s Centre for Urban Research, agreed the Metro 2 tunnel was more urgent than the Suburban Rail Loop, especially because Fishermans Bend was expected to be home to 80,000 residents and 80,000 jobs by 2050.

Dodson said the bigger problem was that Victoria’s planning process to decide what infrastructure the state needed had broken down, with the Andrew’s government failing its obligation to develop a comprehensive transport plan for Melbourne.

“Had we gone through the proper planning process that is expected … that would be the point at which all these questions could be debated and deliberated on,” he said.

In its 30-year strategy released in August last year, Infrastructure Victoria said the state should prioritise extending Metro train services to Melbourne’s west and outer north, and start planning for the Metro 2.

Infrastructure Victoria – an independent body that advises on the state’s future infrastructure needs – did not assess the rail loop because the Andrews government announced it in 2018 as the project it was committed to build.

Rail Futures does not have full costings for its plan. Based on the first Metro Tunnel’s disclosed $13 billion price tag, it estimates the larger project would cost about $30 billion and could be completed by 2035, with western train service upgrades delivered by 2026.

The Victorian Liberal’s transport spokesman, Matt Bach, said the Coalition would audit all major infrastructure projects worth more than $100 million if it won power at the November election.

“When it comes to the Suburban Rail Loop … there are significant questions that need to be asked and answered before the government forges ahead,” Bach said.

Prime Minister Anthony Albanese pledged $2.2 billion for the Suburban Rail Loop before the May election, but the Andrews government wants another $9.3 billion from its federal colleagues.

The first Melbourne Metro tunnel is under construction and is set to open by 2025, with five new underground stations in North Melbourne, Parkville, the State Library, town hall and near the Shrine of Remembrance on St Kilda Road.