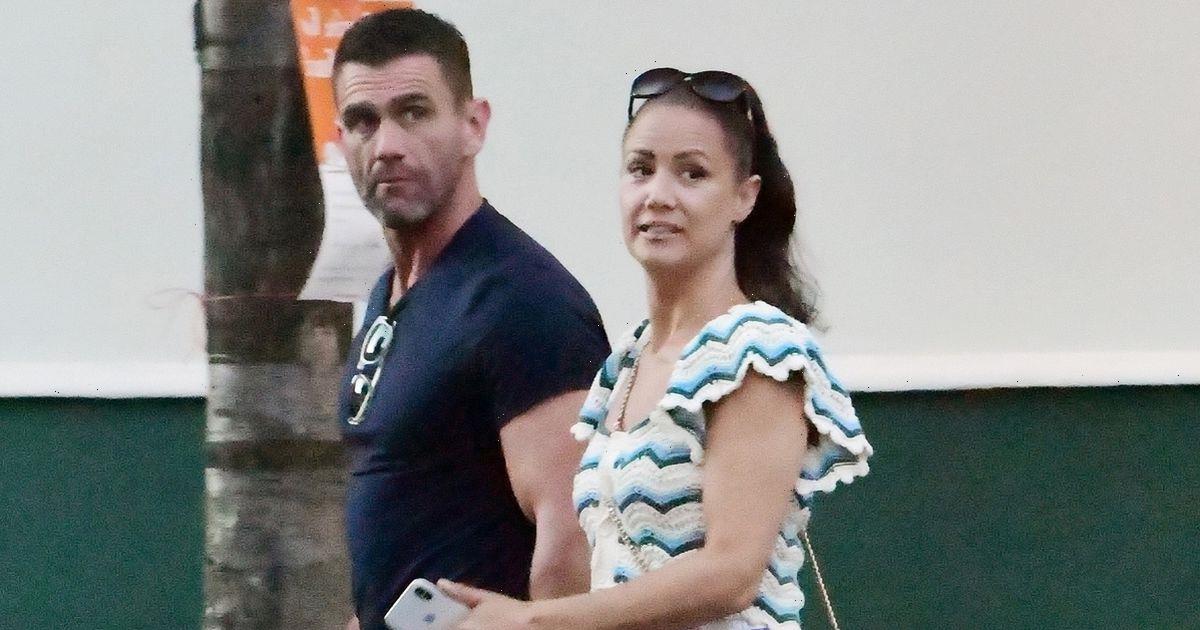 EastEnders hunk Scott Maslen was spotted loved up with his rarely seen wife Estelle Rubio as they headed to a restaurant together.

The actor, 51, was spotted heading to Greek restaurant Lemonia in Primrose Hill, London, with his wife of 14 years, with the couple looking as loved up as ever.

Holding hands and crossing the road, Scott could be seen wearing a black t-shirt with a cream pair of chinos and a pair of black trainers, with a pair of sunglasses hanging from his t-shirt's neckline.

Meanwhile, music producer and singer Estelle looked very summery, wearing a blue and cream flutter sleeve top with a light blue skirt, completing the look with a pale pink bag and some flipflops.

The actor looked worlds away from his EastEnders alter ego Jack Branning, who he has played since 2007, with the actor being spotted around the Primrose Hill area for the second time this week.

On Tuesday, the actor was spotted showing off his muscular physique while out on a stroll across the London neighbourhood.

Enjoying the sun, Scott could be seen sporting an orange Nike vest and grey flannel shorts for the outing and the actor looked to be in prime shape as he checked his messages on his phone during the walk.

Shielding his eyes from the sun, the star also wore a pair of round rimmed sunglasses and a pair of large over-ear headphones to help provide a soundtrack for his jaunt in the sun.

Scott's two appearances out in public are a stark contrast to what many fans will recognise him in, as his role as businessman Jack Branning in EastEnders often sees his character dressed in finely tailored suits.

Scott originally joined the soap back in 2007 where he remained a regular cast member until 2013, however following a brief time away from the soap, show bosses managed to lure him back in 2015 where he has remained a firm fan favourite ever since.

In recent months, Scott has also found himself in some high profile storylines, which include Jack being blackmailed by ex partner Sam Mitchell ( Kim Metcalf ) who even threatened to snatch their son and move abroad if he didn’t cooperate with her dodgy plans.

In real life, Scott thankfully has far more luck when it comes to relationships, as he has been happily married to Estelle for 14 years, with the couple sharing one son together, 17 year old Zak.

Not one to shy away from showcasing his family life, Scott frequently shares updates with his fans on social media about some of the activities he and Estelle have gotten up to.

These include watching football matches, enjoying romantic nights out, or even working out together.