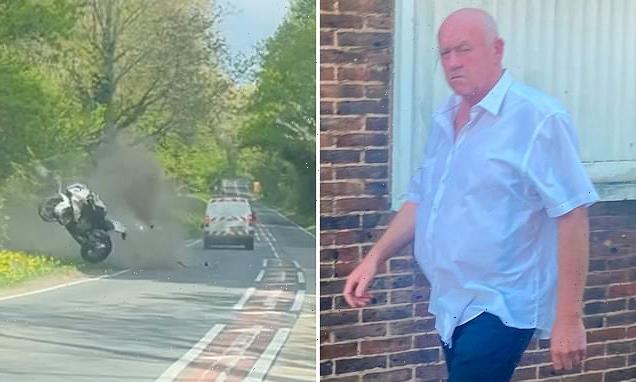 A dangerous drunk driver narrowly avoided jail today after shocking video footage showed him repeatedly swerving his van into oncoming traffic before smashing into a motorcyclist.

A court heard Stephen Jones, 58, was so drunk ‘he could barely stand’ when he got behind the wheel of his white Peugeot van before the horrifying incident on April 30.

In footage which a judge said ‘would make anybody’s heart stop’, Jones was filmed veering wildly from side to side as he drove north on the A32 in Wickham, Hampshire.

In the shocking two-minute recording, played at Portsmouth Crown Court, horrified road users can be seen desperately dodging out of Jones’s way as he careers towards them, while the driver behind filmed in terror. 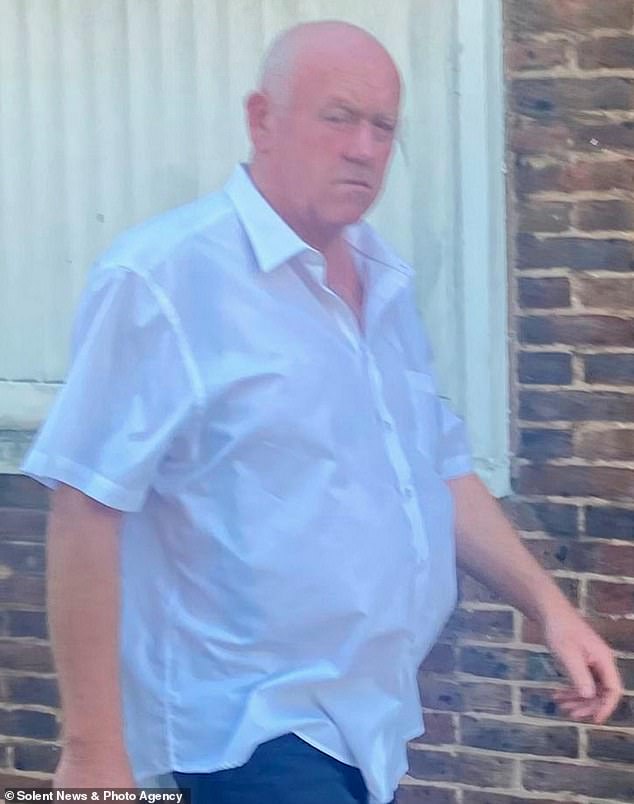 Stephen Jones, 58, appeared at Portsmouth Crown Court today where he received a one year jail term suspended for two years, along with a two-year driving ban and 250 hours of unpaid work

Jones, wearing a white shirt and black trousers, stared at the floor as the video showed he clipped two cars before then smashing into motorcyclist Scott Lemon, leaving the self-employed dad-of-two with serious injuries.

Oliver Kelham, prosecuting, told the court: ‘The van was weaving from side to side and crossing the opposite carriageway.

‘After a near-miss with several vehicles, the driver ended up colliding with a motorcycle on the opposite side of the carriageway.

‘The motorcyclist, Mr Scott Lemon, was knocked off and the van stopped.’

Mr Kelham told the court how a drunken Jones was seen stumbling and could barely stand when police arrived.

‘[Jones] was noted to be slurring his words and smelt of alcohol.

Tests revealed he had 120 microgrammes of alcohol in 100 millilitres of breath – almost four times the limit – following an afternoon boozing alone in a pub.

The crash left Mr Lemon with extensive injuries to his hands, arms, hip and neck.

In a statement read by Mr Kelham, Mr Lemon said he was still walking on crutches more than two months on from the crash on April 30 this year. 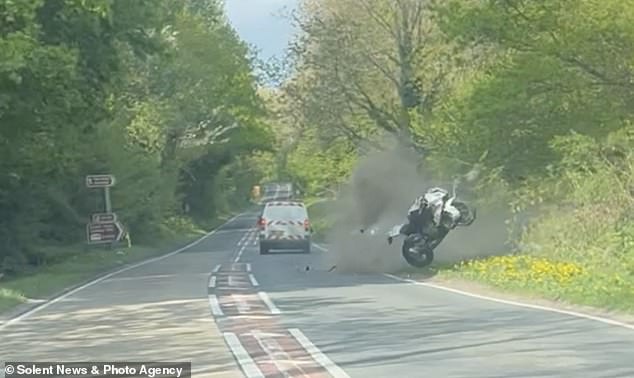 After several vehicles dodged him, Jones ploughed into motorcyclist Scott Lemon (pictured) knocking him off his vehicle in the crash on the A32 in Wickham, Hampshire, on April 30

He said: ‘Sometimes the pain from my shoulder is so immense that I could pass out.

‘I’m normally a very positive person and active person but this incident has left me struggling to cope. I feel like I have been robbed of my normal life.

‘I’m really worried about my family because I’m self-employed and I cannot work.

‘These worries are compounded by the pain I’m in and that I cannot do activities with my children.

‘When I think about the incident I get really angry that a selfish individual did this to me.’

Mark Kessler, defending, said Jones had pleaded guilty to a count of dangerous driving and driving while under the influence of alcohol.

He said: ‘He accepts responsibility for what he has done and is sincerely remorseful and sorry for what has happened.

‘He has become socially isolated and without even really thinking about it he has descended into what amounted to a chronic alcohol problem.’

He added: ‘The driving which you displayed was quite extraordinary. The final event with the motorbike rider being struck and coming off his bike would cause anybody’s heart to stop.’

However, the judge refused to send Jones to prison, instead imposing a one-year prison sentence, suspended for two years.

‘It seems to me that despite this being an awful incident, to send you to prison for it is something that I can just about avoid.’

Jones was also ordered to carry out 250 hours of unpaid work and was disqualified from driving for two years.