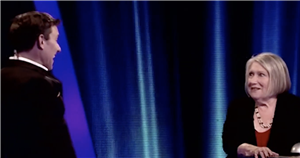 Tipping Point fans were all saying the same thing as they noticed a contestant's bizarre habit on the ITV show.

Thursday’s edition of the ITV programme saw four contestants try and win a £10,00 jackpot but one contestant in particular sent tongues wagging.

Anne, a retired PA from Dorset competed against Dianne from Oxford, John from Newcastle Upon Tyne and Tom from Bridge End.

Although viewers were delighted to see her beat out her fellow competitors to reach the final but they couldn’t help but take to social media to comment on how focused she was during her time on the show.

One viewer wrote: "Anne doesn’t even look at Ben when he’s talking to her lol #TippingPoint."

Anne went onto win nearly £3000 in the final round of the competition, only just missing out on the jackpot prize.

However another blunder earlier in the programme also set the social media blogging site alight.

Event Account Manager Dianne was given a question about the royal family in which she was asked to identify the relationship between The Duke of Cambridge and Princess Charlotte.

And whilst it appears obvious that Prince William is indeed Her Royal Highness’ father, the contestant appeared to not have an understanding of Her Majesty’s family tree, as she mistakenly thought Prince William was Prince Charlotte’s uncle – much to the chagrin of viewers.

One fan wrote: “"What relation is Prince William to Princess Charlotte of Cambridge?" Diane "Uncle" Shephard "Father" alongside a series of four laughing face with tears of joy emoji’s.

Whilst another viewer also echoed the sentiment writing: “What relation is Prince William to Princess Charlotte – uncle” alongside more emojis.