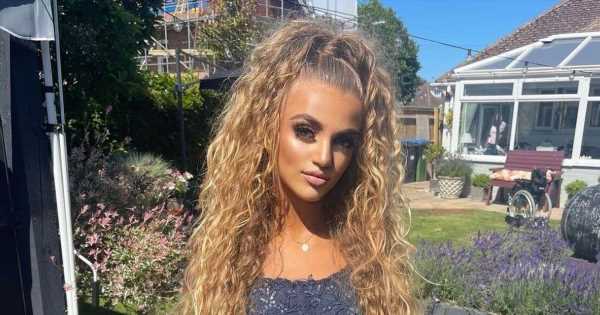 Princess Andre has hit back at critics who said that her makeup is "too heavy".

The teenager, daughter of Katie Price and Peter Andre, took to Instagram to share a picture of herself at her auntie Sophie Price's wedding last month.

The 15-year-old looked incredibly elegant in a navy gown and was chosen alongside her mum and sister to be a bridesmaid.

She completed the glamorous look with a full-face of makeup, while her golden locks were swept into a half-up hairstyle.

Even though the comments section was flooded with positive comments about her look, some of her fans took issue with her "heavy makeup".

Taking to the comments section, one wrote: "You don't need the makeup Princess you are beautiful without it!"

Another added: "Princess you don't need all that makeup on. You are pretty without it. Makes you look older than you are."

A third said: "A natural beautiful girl you don’t need all that makeup love."

A fourth complained: "Looks beautiful, but doesn’t need all that heavy makeup. She’s naturally pretty without it. She’s not her mum and doesn’t need to try to be."

The remarks didn't go unnoticed with the teen, as she responded: "All these comments about makeup. It was a wedding. But I do appreciate the people being nice."

Meanwhile, a fan added: "My god people with all the makeup comments. She’s just a young girl experimenting and dressing up, it’s not a case of whether you think she needs it or not… it’s so passive aggressive."

A second echoed: "Teenage girls wear makeup. Give her a break."

This comes after Princess's 15th birthday and her dad Peter paying a touching tribute to his daughter.

He also issued a stern warning to her as he warned that she won't ever have permission to go on Love Island. Alongside the birthday compilation, he wrote in the post: "Happy 15th birthday to my kind, loving, moody and caring daughter.

"You bring so much life to our home. We all love you so much."

He added: "You're beautiful inside and out just the way you are and never forget that."

Peter concluded by writing: "Happy birthday and no you can't go on Love Island. Love dad."

Princess responded to her dad's post, writing: "Love you," with a red heart emoji.