Former Silverchair frontman Daniel Johns has been given a 10-month intensive correction order after he caused a car crash while driving drunk on the wrong side of the road in the Hunter region earlier this year.

Johns, 43, had been at a holiday house on the evening of March 23 when he became stressed about the release of his upcoming album and entered his car in a “zombie state” to go for a drive, Raymond Terrace Local Court was told on Wednesday. 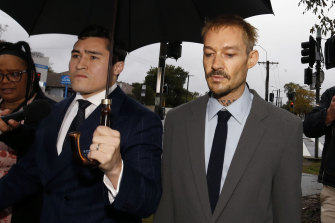 The musician had consumed a bottle of wine and a can of vodka when he became confused driving out of a service centre, turning right into the left-bound lanes of the Pacific Highway at North Arm Cove and continuing for about 200 metres.

At about 10.30pm, a man driving a van well below the 100km/h speed limit saw Johns driving towards him and took evasive action, swerving. He lost control, colliding with Johns before the van rolled, sliding about 100 metres into the median strip.

The SUV driven by Johns also rolled several times before coming to rest in the median strip. The 51-year-old male driver of the van was treated by paramedics at the scene, while a 55-year-old female passenger was taken to John Hunter Hospital, where she was soon released.

When Johns was breath tested, he was found to have a blood alcohol reading of 0.157. He voluntarily checked himself into rehab the next day.

On Wednesday, the musician’s lawyer Bryan Wrench said there was no doubt the offence was serious, but highlighted the trauma his client has experienced since he rose to international stardom at the age of 14.

Wrench said Johns had been self-medicating with alcohol because it was “the only way he could deal with” physical and mental health issues including severe anorexia, which he has experienced since he was 16, and being diagnosed with arthritis at 22.

The lawyer said Johns has remained abstinent from alcohol since the crash and intends to avoid the substance in the future.

He said Johns was subjected to “attacks” and “vitriol” because of his fame, including being stalked by fans, having his mother’s house graffitied, and being wrongly accused of attending a Sydney brothel, which spurred a defamation payout.

Wrench said these incidents had been triggers for Johns’ mental health, and he had been “a recluse” since he was discharged from rehab in late June. He said Johns’ latest album “hit number one” while he was in rehab, but he has not attended any events for it.

Magistrate Ian Cheetham said Johns has a previous offence of mid-range drink-driving on his record from February 2015 and was experiencing “significant” intoxication on this occasion, while driving at an unknown speed.

However, he said, it would be inappropriate for Johns to be given a period of full-time imprisonment because of his complex mental health issues which he is currently receiving treatment.

In a report to the court, a psychologist described Johns as a “deeply troubled person” who had experienced the “highly dysfunctional behaviour of other people” as a result of his “meteoric career” in the music industry.

The court heard Johns experiences a range of disorders, including a personality disorder, an eating disorder, and severe and chronic pain from arthritis which is exacerbated by stress.

Cheetham sentenced Johns to a 10-month intensive correction order, a form of custodial sentence which is served in the community.

Under the order, he must be supervised by community corrections and receive treatment or rehabilitation as directed. He has also been disqualified from driving for seven months and will be subject to a two-year interlock order once he is permitted to drive again.

Cheetham directed the police prosecutor to take Johns’ license, before wishing him well.

Johns did not speak as he left court with his lawyer.