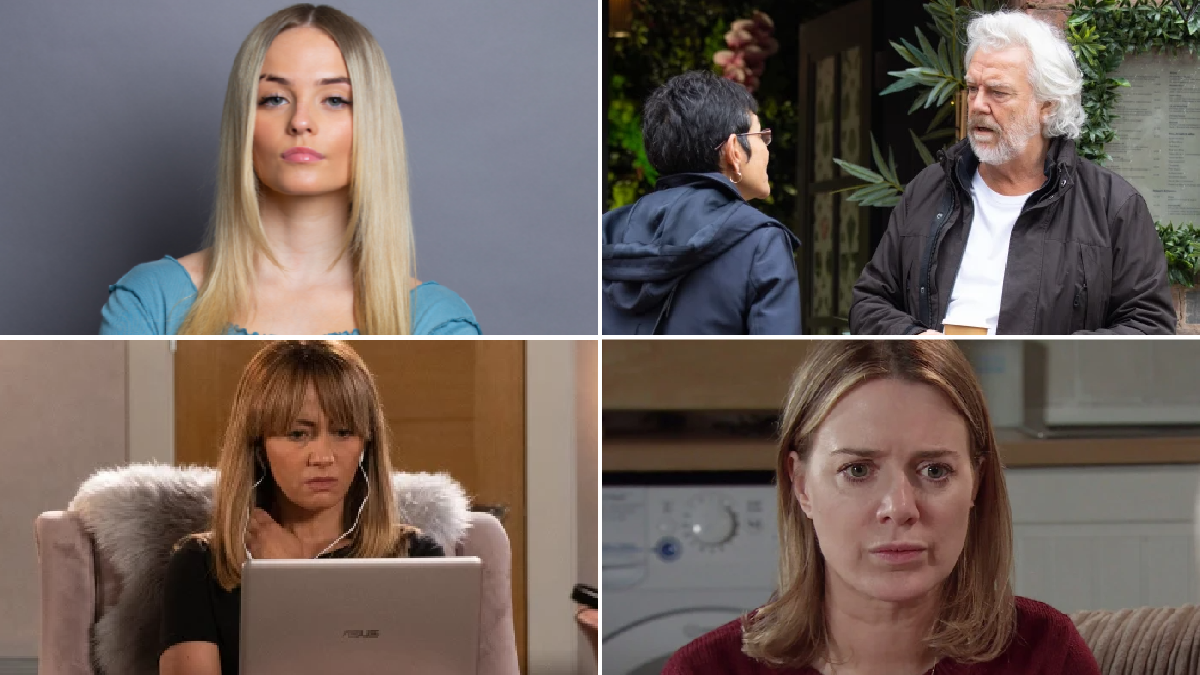 Lives are under threat in Coronation Street next week – as Kelly Neelan (Millie Gibson) strives to right the wrongs of her dead gangster dad Rick.

But she soon realises that she has bitten off more than she can chew when she is out of her depth; and soon she is missing.

Maria Connor (Samia Longchambon) is also targeted as the campaign against her heightens, and she begins to fear that she is in serious danger.

And with the dust settling from the wedding, things are more complicated than ever for Fiz Stape (Jennie McAlpine).

Fiz, Phill and Tyrone navigate their way around their relationships post the wedding. Has Fiz done the right thing?

David is less than impressed with Stephen’s now role in the family but Sarah is impressed by Stephen’s business advice and tries to convince Carla that they would be better off buying their silk from him.

Carla’s unimpressed, convinced that working with family never ends well.  Sarah’s left frustrated but is flattered when Stephen tells her that someone with her experience shouldn’t be taking orders from Carla.

Sally’s touched to find Tim has prepared a special birthday breakfast for her and suggests they spend the day relaxing in the hot tub.

Tim and Sally frolic in the hot tub and when Tim announces that he can feel a stirring down below, Sally reckons it’s the best birthday surprise she could wish for. Is their marriage back on track?

As Stu approaches Speed Daal, he’s put out to witness Stephen flirting with Yasmeen. He decides to tell her the truth about being drunk at work.

Sensing Maria is nervous about going to a lunch meeting on her own Kelly offers to accompany her. Maria is shaken when Jimmy approaches her and warns her to keep her nose out of matters she doesn’t understand.

But things go from bad to worse when a creepy guy approaches and tells her how much he enjoyed her online video, running out she gets a notification telling her that her phone is being tracked. When Gary calls, a petrified Maria tells him that she thinks she’s being followed.

As a terrified Maria scrabbles in her bag looking for the tracking device, she hears footsteps and in a panic, grabs a can of hairspray and turns.

As Gary, Kelly and Liam tuck into pizza, Maria draws the blinds, convinced someone might be watching them.

Phill seeks Tyrone’s advice about how to make sure Fiz knows exactly how he feels about her. Fiz is stunned when Phill arrives outside Underworld with a boombox blaring holding up cards containing the words of Fiz’s favourite love songs, but to the amusement of the factory girls, he gets the cards muddled up.

In the bistro, Gail hosts a family lunch to welcome Stephen home, but it soon descends into chaos when David and Sarah embark on a slanging match over Audrey’s money.

Disgusted with the pair of them, Audrey walks out and Stephen’s embarrassed. Worried about Audrey’s state of mind, Sarah leans on David to put things right.

Sally suggests to Tim that he should listen to Sting’s interview about tantric sex as it could be the key to a successful love life. Tim prepares a romantic meal for Sally and tells her he’s feeling much more positive and reckons it won’t be long before things are back to normal in the bedroom.

Aggie lays down the law and tells Ed that he’s fixing Steve’s roof for mates rates and that’s an end to the matter.Ronnie shows Ed and Paul a photo of a derelict pub and suggests that together they buy it, knock it down and redevelop the site for housing. Will Aggie agree?

What a Gary on

At the bus stop, Kelly reveals that she’s tracked down another of her Dad’s clients and she’s off to pay them back. Aadi says he’ll go with her and Kelly’s grateful, agreeing to go on a date later to Speed Daal.

Meanwhile Gary is furious to find out from Sharon what Kelly is up to but Kelly refuses to listen telling her he is not her dad. Kelly storms out and, alone, calls at a house and introducing herself as Rick Neelan’s daughter, hands Ross an envelope full of cash and explains that she’s trying to make up for her Dad’s wrongdoing.

Ross calls  mate and tells him about Kelly’s visit – is she in danger? Aadi waits at Speed Daal but realises he has been stood up.

As Ed works on a radiator at Debbie’s hotel, he’s suddenly electrocuted and after being propelled backwards, lands unconscious. In a panic, Ronnie orders Paul to call an ambulance.

Debbie realises with horror that she’s no idea when an inspection was last carried out and Ray was notorious for cutting corners. Aggie rails at Debbie for endangering Ed’s life and tells her she’ll be hearing from their solicitor.

At Wendy’s house, Abi watches with suspicion as she taps away on her laptop. Abi opens Wendy’s laptop and reads with fury the notes she’s made about her. Clearly hurt, Abi tells Wendy that she really thought she was making progress with Alfie.

Maria says Liam is not well and she is taking the day off work. Craig tells her Jimmy is guilty of posting malicious messages. As Maria heads out of the flat, Jimmy approaches and menacingly tells her that he’ll make sure she lives to regret blabbing about him to the police. Maria’s scared.

Sean’s excited at the prospect of Dylan coming to stay and tells Eileen how he hopes Frank and Dylan will hit it off. Dylan arrives in the café and mistakes George for Sean’s boyfriend. When Frank refuses an invite to supper, making out he wouldn’t want to intrude on Dylan’s first night, Sean’s disappointed.