Olympic supremo John Coates has backed swimming’s controversial transgender policy and said he was “particularly proud” of Cate Campbell’s speech supporting the move in the face of vociferous opposition from some of her fellow athletes.

Coates helped design the International Olympic Committee’s updated guidelines around transgender athletes in his role as IOC vice-president, which moved away from a blanket approach and eligibility criteria based on testosterone levels to effectively put it on individual sports to come up with their own rules based on the nature of each sport or discipline and how competitive advantage is measured.

The flow-on effects of that are now being felt after world swimming body FINA banned transgender women from competing in elite women’s competitions – the strictest move yet from an Olympic sport.

Campbell addressed FINA’s extraordinary general congress, where the decision was made last month, saying that while she understood the importance of inclusion and had long wrestled with the issue herself, science had shown it was no longer possible to balance inclusion with fairness, which she said was a “cornerstone” of elite competition.

Those comments attracted significant criticism, including from Australian Olympic teammate Maddie Groves, who asked if she was “okay with ostracising an already maligned group” and said FINA’s policy was “discriminatory and unscientific”.

Coates, who stepped down as Australian Olympic Committee boss earlier this year after more than three decades but has retained his position with the IOC, told the Herald and The Age he was in FINA and Campbell’s corner on the matter. 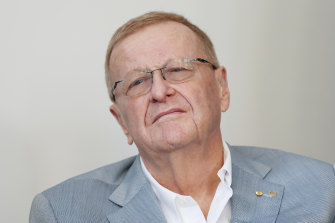 “I think the IOC got it right in November last year, when effectively, we said one size doesn’t fit all sports, or even events within sports,” Coates said at a launch on Tuesday of Nicholas Whitlam’s new book, Paris 1924, which explores what the city was really like when it hosted the Olympics almost 100 years ago.

“We set out some guidelines for each sport to apply – bearing in mind, too, that there are already some sports where males compete against females, like archery, shooting, equestrian.

“I thought it was a sensible approach from FINA. I was particularly proud of Cate Campbell’s presentation, which she said wasn’t easy for her because there are some of her contemporaries who didn’t agree.

“But I think it was a good solution, and we’ll see more sports having a policy. There’s clearly going to be issues as it filters down and how that’s applied, but I think the principles are there and are right.”

There are currently no elite transgender women swimmers, but the success of American Lia Thomas at the NCAA Championships earlier this year had brought the topic into the global spotlight after she declared her ambition to compete at the Paris Olympics in 2024.

FINA has created a working group to establish how an “open” category could be created to enable athletes like Thomas to swim in elite competitions, but Coates said there would be no open events in Paris.

Meanwhile, Coates said he was keeping an “open mind” on who should lead preparations for the Brisbane 2032 Olympics he helped land despite previous comments which suggested domestic sporting administrators would not be seriously considered.

Outgoing AFL chief executive Gillon McLachlan has been touted as an example of the possible contenders that could emerge from within Australian sport, with a global search now underway for a CEO of the Brisbane OGOC.

Coates has been insistent that the ideal candidate would have experience in the international sphere and may not necessarily work in sport, theoretically ruling out the likes of McLachlan.

“We’ve got an open mind,” said Coates, who remains on the board of the 2032 organising committee.

“We’ll consider all applications. [McLachlan] is a very fine administrator. But it doesn’t have to come from sport.

“The London Games, the CEO was the head of Goldman Sachs, Paul Deighton. The Games in Tokyo, Toshiro Muto, who was first the head of the department of finance – people like that have got the ability to grow an organisation from a very small staff to start with and to grow it to what in Tokyo’s case was about 3000, leading into the last year, and then rose to 70,000.

“International experience is a help. Understanding of how the world operates is important. We could be dealing with the Ukraine situation if it was now. Thomas Bach would be talking to 14 or so world leaders. And you’ve got to be at home doing that.”

News, results and expert analysis from the weekend of sport sent every Monday. Sign up for our Sport newsletter.