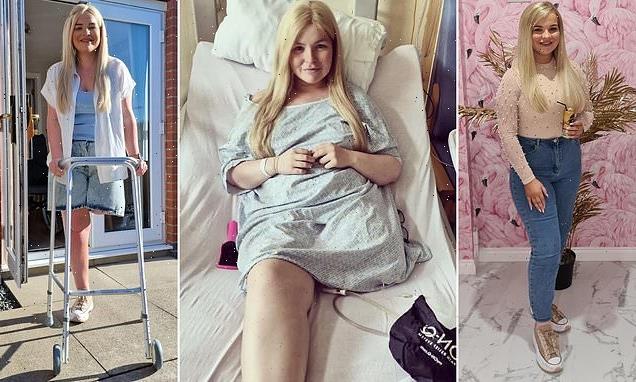 Woman, 29, reveals she was forced to have her leg amputated and now uses a walking frame after doctors missed a ‘one in a million’ cancer diagnosis for three years

A woman had to have her leg amputated after doctors ‘missed’ signs of a rare cancer for three years.

Rebekah Laverty, 29, from Glasgow, was diagnosed with synovial sarcoma after an MRI scan revealed a 13cm tumour above her right knee.

Despite suffering from excruciating pain the office worker claims she was wongly diagnosed with an inflammatory condition.

Synovial sarcoma is a rare type of cancer in soft tissue which affects around one in a million people.

Rebekah said: ‘The type of cancer I have is usually found in the arms, legs or near joints such as the wrist or ankle but it’s so rare I’ve been told a GP will maybe see one case in their whole career, so mine wasn’t picked up. 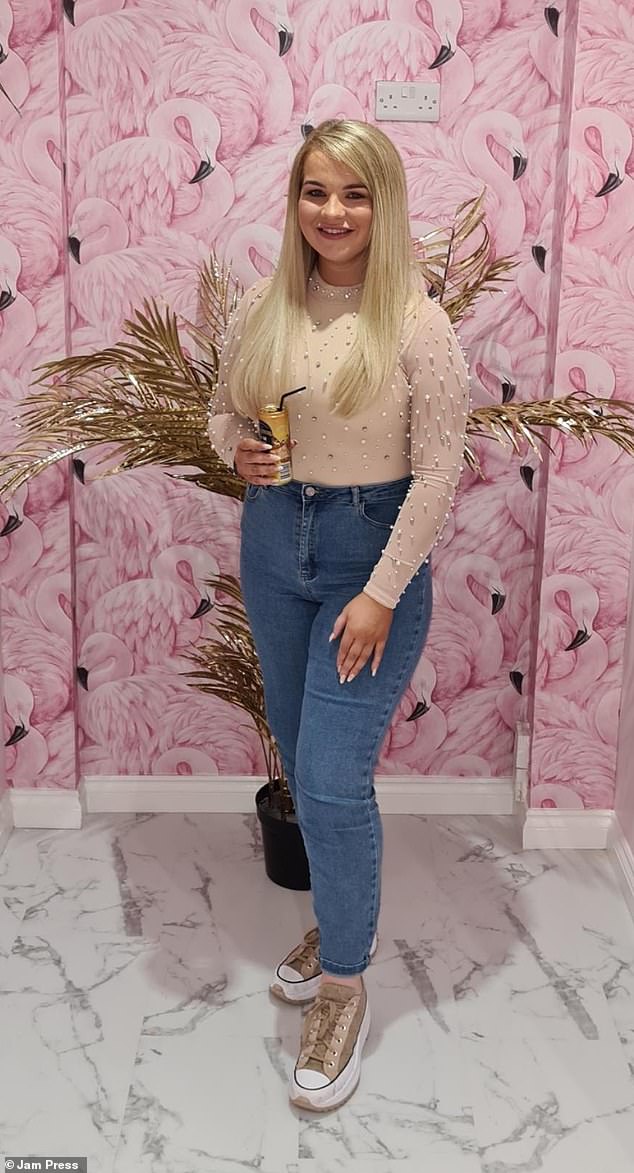 Rebekah Lavery, 29, from Glasgow, was diagnosed with synovial sarcoma after complaining of excruciating pain and swelling in her right leg for three years

Rebekah now uses a walking frame to get around after making the agonising decision to have her leg amputated, which would reduce the risk of the cancer returning 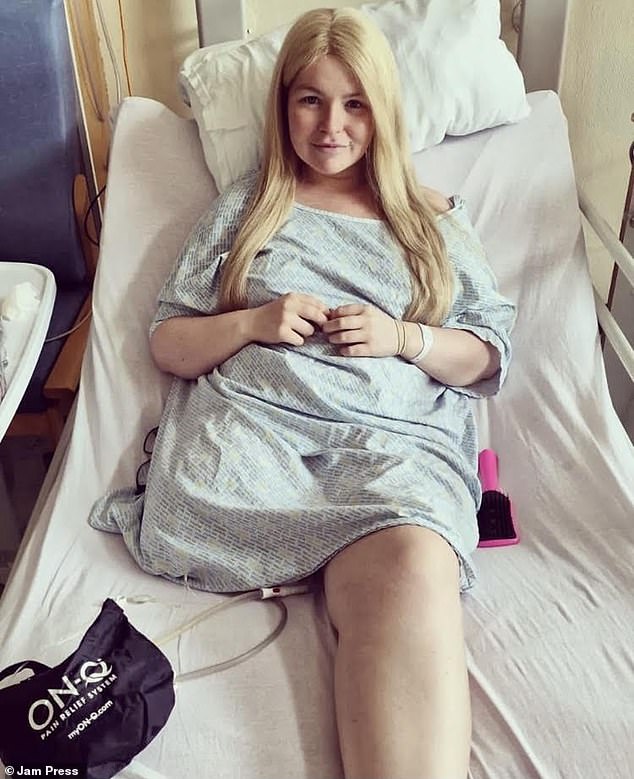 ‘My referrals were also delayed due to Covid.

‘It took until September 2021 for me to be referred for an MRI and get some answers.’

Rebekah first went to the doctors with pain in her knee in 2019, but claims she was told she had bursitis – an inflammatory condition that causes painful swelling.

While having treatment for the wrong condition she claims doctors injected steroids into her knee and even tried to drain fluid from the area, which left her in excruciating pain.

She said: ‘I was on six tablets a day with weekly blood tests to ensure the mix of medicines weren’t damaging me.

‘On top of that I was given steroid injections into my knee which never seemed to help – in fact they heightened the risk that my cancer could spread and grow.

‘A few times doctors attempted to drain fluid from my tumour thinking it was just swelling.

‘That was agonising. I’m so angry they got it wrong for so long and I had to go through so much.

‘I took myself to A&E a few times as I was being sick in pain but X-rays would come back clear and I’d be sent home with more pain relief.’

Eventually Rebekah was referred to a rheumatologist, but after a year of treatment she showed no sign of improvement and was referred for an MRI scan, which finally revealed the mass growing above her knee.

A biopsy confirmed she had synovial sarcoma and after three years of agony, Rebekah finally received her diagnosis in December last year.

‘I received the news that I had this cancer at an appointment that I went to on my own,’ she recalled.

‘By then I’d been to countless appointments with no answers so I had no faith that this time would be any different.

‘I called my partner in shock and I was sent to the Beatson West of Scotland Cancer Centre the same day to discuss my treatment. 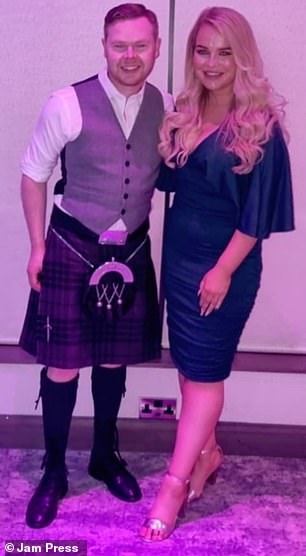 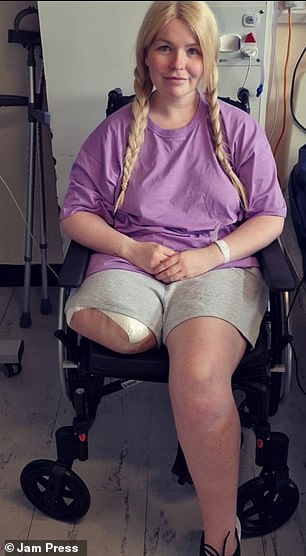 ‘They were fantastic. From the moment of my diagnosis I was looked after.’

She added her partner David had been incredibly supportive throughout.

After her diagnosis Rebekah was told she needed between three and four rounds of chemotherapy and 25 rounds of radiotherapy.

But the chemo took its toll on the 29-year-old, who decided to freeze her eggs before beginning treatment.

She said: ‘Each chemo round lasted for four days and I had to stay over in hospital each time.

‘I was violently sick, I needed blood transfusions and I lost all my hair.

‘Thankfully I never had any side effects from radiotherapy other than redness on the area being treated.

‘Through all of that I was just so grateful to finally have answers.’

When she finished treatment, Rebekah was given three surgical options – one of which was amputation.

While the other two options would have saved Rebekah’s leg, she opted to amputate.

She recalled: ‘It was the hardest decision for me to make.

‘I knew I was going to go from an able-bodied person to a disabled person overnight. 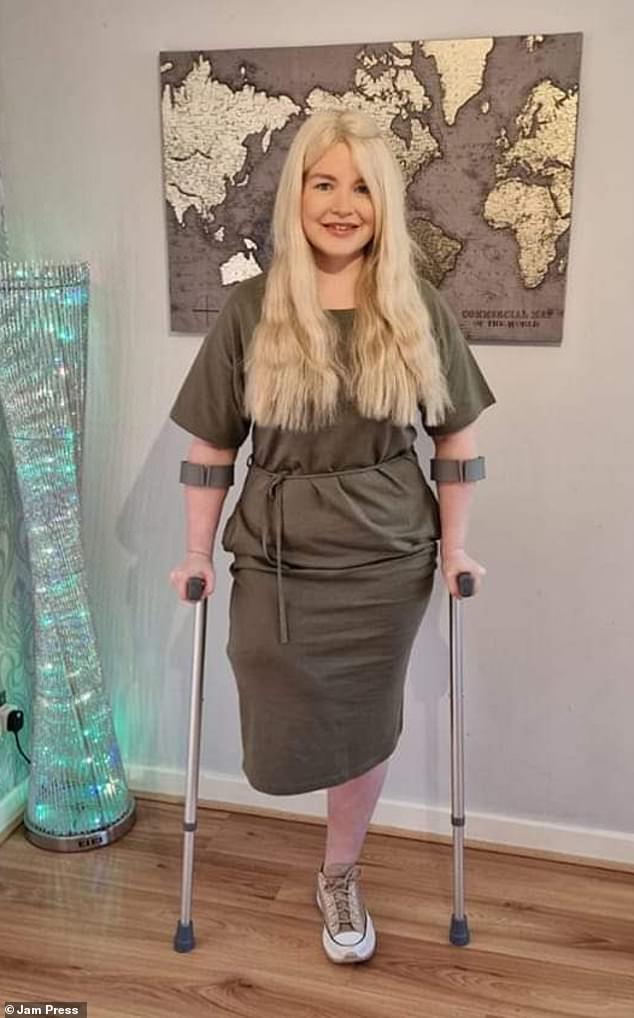 Rebekah, an office worker, says she is determined to get back on two feet by the time her 30th birthday comes around next year

‘But I also knew amputation was the best solution to give me the best chance possible.’

Rebekah explained she was told there was a risk the cancer could spread and develop somewhere else in her leg if she didn’t amputate.

Now the 29-year-old is recovering at home and uses a wheelchair and walking frame to get around.

‘The first few days after having my leg amputated I could still feel the lower part of my leg and could ‘move my toes’ and felt like I had an ‘itchy’ foot,’ she recalled.

‘As time has gone on this has reduced and it only happens occasionally but I have constant pins and needles and throbbing pains that happen all day and all night.’

She added she is currently trying out different medication that will reduce the itching.

Now she is fundraising for a £90,000 microprocessor mechanical leg so that she can ‘enjoy life with no limitations’.

Rebekah is aiming to be back on two feet by her 30th birthday next year. 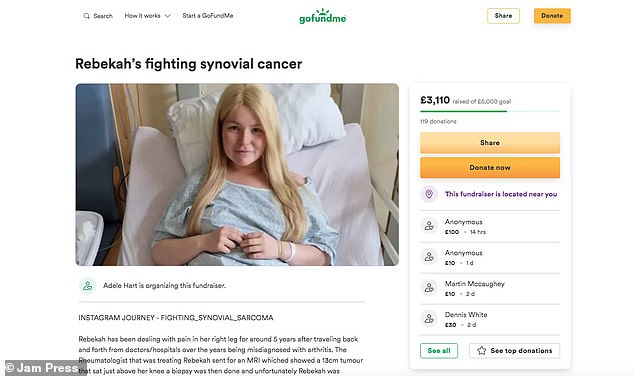 ‘Eventually I want to live life with no limitations – how I was when I still had my leg,’ she said.

‘The type of prosthetic I’d like should have almost every function of a human leg.

‘I’m hoping my partner and I can look forward to a nice holiday to relax for my 30th next year and by then I’d like to be up on two legs and getting on with life.

While she learns how to manage with one leg, Rebekah is posting about her experience on her Instagram page @fighting_synovial_sarcoma.

What is synovial sarcoma?

Synovial sarcoma is a cancer of the soft tissue which can affect muscles and ligaments.

It is most commonly found in the arm, leg or foot and near joints like the wrist or ankle/

Around one in three people diagnosed with synovial sarcoma are under the age of 30 and the cancer appears to be more common in men.

There are three different stages of treatment for the rare cancer – surgery, chemotherapy and radiotherapy.

Early signs of synovial sarcoma can be in the form of swelling under the skin around the areas most commonly affected.

The lump can increase in size and is sometimes painful – but not always.

She said: ‘I decided to document my journey as when I was first diagnosed it was a very scary time and synovial sarcoma is a very rare type of cancer therefore there wasn’t very many people I could turn to for answers.

‘I know I wanted to know everything from people’s own experiences so I searched social media and found loads of lovely people.

‘From then on I said I was going to document everything in case it might help someone else.’

Among the hurdles she has shared are her first outings since having her leg amputated.

‘I get the occasional stare but it doesn’t bother me too much. I’m just glad to be cancer free right now and hope it stays that way.

‘I always think how there are people much worse than me. Although this is life-changing, I won’t let it be life-limiting.’

Russell Coulthard, NHS Lanarkshire deputy director of acute services, said: ‘We appreciate this must have been an incredibly distressing time for Rebekah.

‘We would welcome the opportunity to speak with Rebekah about her experience if she would like.

‘I would encourage her to get in contact with us directly through our patient affairs team to allow us to arrange this.’

Rebekah has set up a GoFundMe page to help towards the cost of her mechanical leg.