The last time the British electorate was asked if it wanted a change in the voting system, its answer was a resounding No.

Which may explain why the Lib Dems — who have been banging the drum for proportional representation for decades — are so keen to form a 21st-century version of the Lib-Lab pact that limped along for 16 months in the strife-torn 1970s. 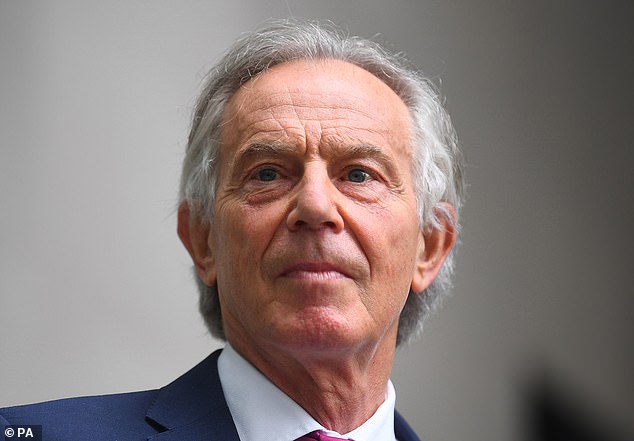 As Andrew Neil pointed out in the Mail on Saturday, the former PM Tony Blair (pictured) is ‘on manoeuvres’, to mastermind a new centrist movement whose ultimate aim is to reverse Brexit. Such an outcome is much more likely than most people, including Boris Johnson and his advisers, realise

Emboldened by the success of their tactical voting campaign in the two June by-elections, when Labour took Wakefield from the Tories and, in a real upset, the Lib Dems seized Tiverton and Honiton, they would like to repeat the trick on a grander scale.

Only this time, they will exact a heavy price for pooling their resources with Labour in an ABC — Anything-But-Conservatives — campaign.

The word is that in return for propping up a Labour government they would demand the introduction of proportional representation — whereby the number of votes collected nationwide by each party dictates the number of MPs they send to Parliament — without a referendum.

For the Lib Dems, this is the only way they can ever expect to have more than a handful of MPs. And there is a very real danger that such a stitch-up between the parties will not only propel them into Government at the next election, but ensure a cynical alliance of the centre and far-Left holds power in perpetuity.

And be in no doubt, for Britain, this would be a catastrophe, because it guarantees that a minority party would always hold the balance of power in a government that would be stricken by paralysis and dysfunction. 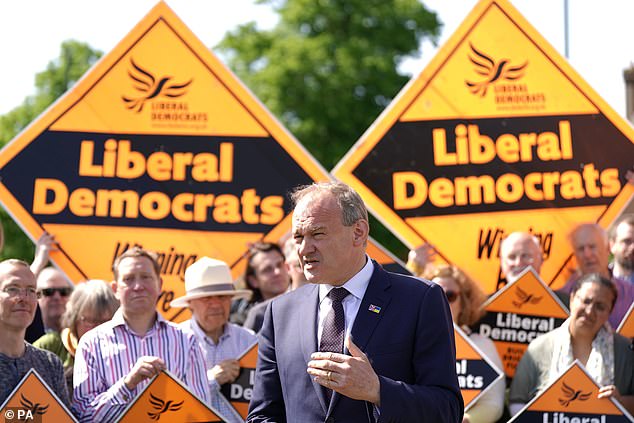 Emboldened by the success of their tactical voting campaign in the two June by-elections, when Labour took Wakefield from the Tories and, in a real upset, the Lib Dems seized Tiverton and Honiton, they would like to repeat the trick on a grander scale. Only this time, they will exact a heavy price for pooling their resources with Labour in an ABC — Anything-But-Conservatives — campaign

It would mean endless Left-wing rule, and the punishment of the middle classes. An end to social mobility and aspiration. Ever higher taxes. And it would almost certainly mean another Euro referendum, with all the misery and division that would bring.

Worse still, it could well bring about the end of the Union — because the SNP would withhold their crucial co-operation until another independence referendum was guaranteed.

And all the while, lurking in the background, would the great puppetmaster himself Tony Blair. As Andrew Neil pointed out in the Mail on Saturday, the former PM is ‘on manoeuvres’, to mastermind a new centrist movement whose ultimate aim is to reverse Brexit. Such an outcome is much more likely than most people, including Boris Johnson and his advisers, realise.

To see the dreadful reality of proportional representation in action, we have only to look at the many countries around the world where the dead hand of PR is plain for all to see, from Israel to Italy.

One of the most vivid illustrations of the disproportionate power it gives junior partners occurred in Germany.

Between 1969 and 1998, the Free Democrats averaged less than 9 per cent of the vote but that didn’t stop them playing key roles in government throughout that period.

For the first 13 years, they backed the Social Democrats, at one point holding six of the 17 Cabinet posts. Then, in 1982, they switched sides and installed a CDU/CSU government of the Right.

A tiny party, which failed to get its share of the vote into double figures, was steering the course of the nation, and we can expect exactly the same to happen here should the worst happen.

Many will say I am being a Cassandra, a prophet of doom. But as Aneurin Bevan, Labour’s father of the NHS, once wisely remarked: ‘Why look in the crystal ball when you can read the book.’ 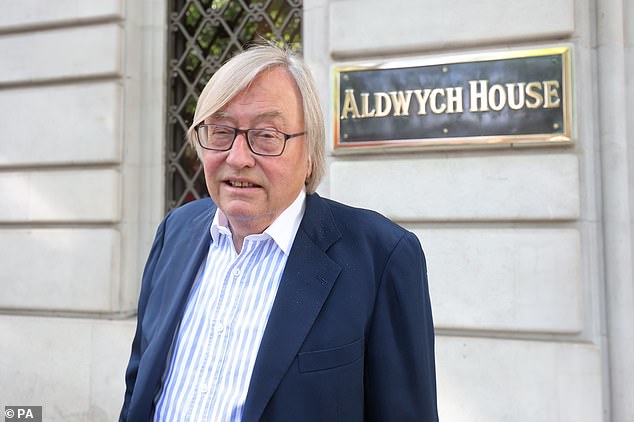 To see the dreadful reality of proportional representation in action, we have only to look at the many countries around the world where the dead hand of PR is plain for all to see, from Israel to Italy. David Mellor is pictured above

I’ve been wrapped up in politics as an activist, an MP, a journalist and a broadcaster for more than 50 years, and the fact is that only my generation and those older than me remember what a Lib-Lab pact really entails.

It is a form of zombie government that is only possible when the political system is weakened almost to the point of disintegration.

Labour are willing to countenance a deal with the Libs only when they are in a state of desperation, as PM James Callaghan was in March 1977. With militant unions and sky-high inflation tearing the country apart, he and Liberal leader David Steel announced they would ‘work together in the pursuit of economic recovery’.

What Callaghan really meant was that he had lost his Commons majority thanks to by-election defeats and was prepared to do any deal to cling on to power.

The pact achieved nothing except a prolongation of his period in office. To those fortunate millions too young to remember the 1970s, it might seem more probable that the Lib Dems would go into coalition with the Conservatives. After all, that’s what happened when Gordon Brown lost power in 2010.

Then, as now, the Lib Dems demanded their pound of flesh. In a move that amounted to political blackmail, the price of their co-operation was the promise of a plebiscite on proportional representation.

This time round they clearly won’t want to leave PR to the judgment of the people.

Instead, this seismic change to our voting system will be implemented as soon as the Labour-Lib Dem coalition is installed in Downing Street.

That’s the sole manifesto pledge you can be sure they will keep. For under the first-past-the-post system the British people choose between different propositions from the various parties and the one that wins a majority enacts legislation in line with those.

But under PR we only learn which policies will emerge after we have cast our votes because of the fudges and stitch-ups that are intrinsic to the negotiation of the coalition that will ensue.

Being in an alliance means never having to say you’re sorry. You just blame the other partner. A pact, as the Lib Dems quickly discovered after entering Government with David Cameron’s Tories in 2010, supplies an all-purpose excuse, a get-out-of-jail-free clause for every occasion.

The coalition soured relations with Labour but following Jeremy Corbyn’s landslide defeat in 2019, the Lib Dems are now so desperate that they are ready to govern even with partners they can’t trust.

That distrust has deep roots. Ever since the Callaghan-Steel pact fell apart, Labour stalwarts have regarded the Liberals with contempt.

Left-wing grandee Austin Mitchell used to say the Lib Dems were ‘a bucket for the voters to spit in’, a repository of protest votes the electorate could use to show contempt for the two main parties.

At first, many Labour MPs assumed that Boris Johnson would make such a monumental mess when confronted with the task of actually governing, his support would simply melt away. But under Sir Keir Starmer, Labour so lack conviction that they cannot capitalise on Boris’s mistakes.

Meanwhile, the Lib Dem leader Sir Ed Davey is no more charismatic, forced to rely on cheesy publicity stunts such as the ‘Show Boris Johnson the door’ door, to make any impact at all.

Neither has a hope of marching their party to victory. By acting together, though, in a dishonest marriage of convenience, they could well oust Boris.

And when they get a foot in that door, we can say goodbye to real democracy for ever.