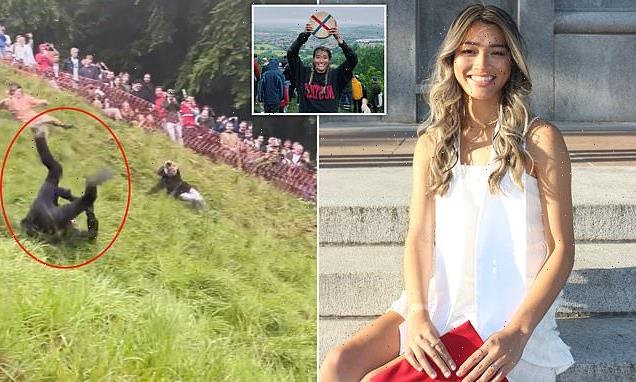 Cheese got it! US woman WINS the UK cheese rolling championships in 15 seconds after travelling 4,000 miles to take part in the competition

An American woman travelled more than 4,000 miles to the UK to compete and WIN the 2022 cheese-rolling championship.

She scheduled a summer trip to Europe from her home town of Raleigh, North Carolina, to coincide with the iconic dairy-based event.

Each year, scores of fanatics gather at the grassy knoll to chase a four kilogram wheel of Double Gloucester down a steep, 200 yard hill.

The 21-year-old said she first heard about the 196-year-old extreme sport a few years ago. 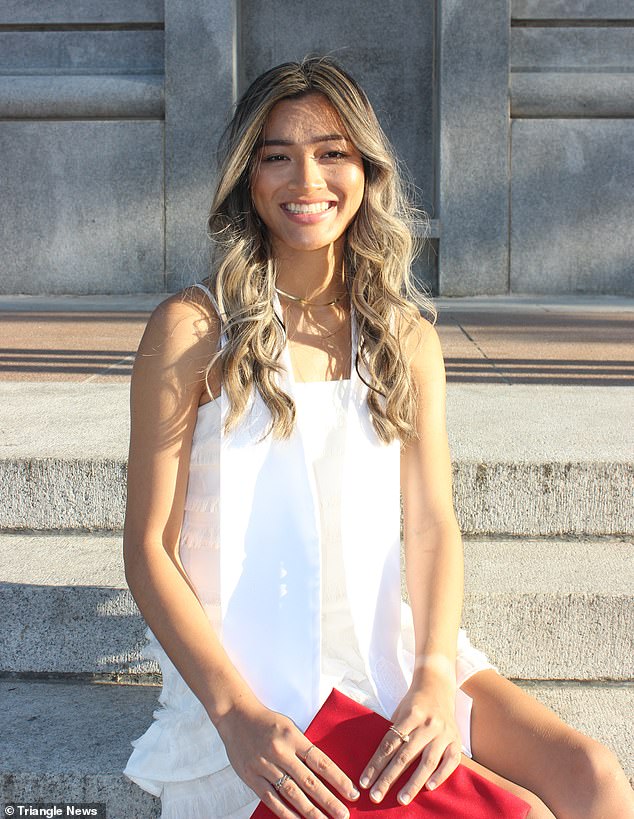 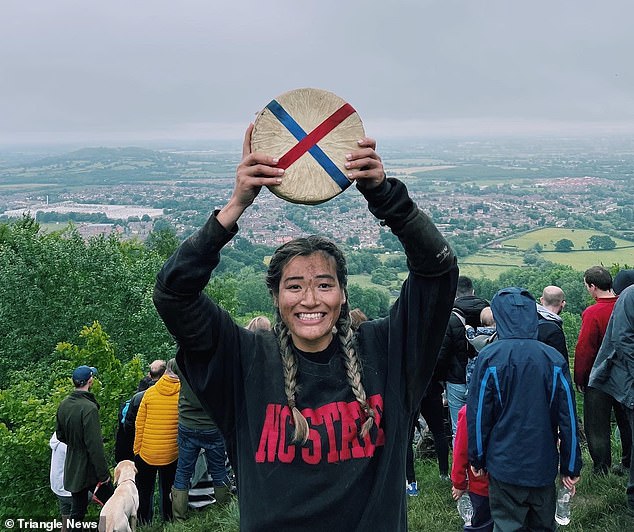 The 21-year-old said she first heard about the 196-year-old extreme sport a few years ago and decided to sign up. She was hoping to win, but wasn’t sure she would

Abby said: ‘I heard through YouTube and word-of-mouth about this cheese-rolling thing.

‘My friends and I were joking about me doing it because I was going to Europe this summer anyway.

‘I booked my tickets and made sure I’d be in the UK for the race. Then I started practicing.’ 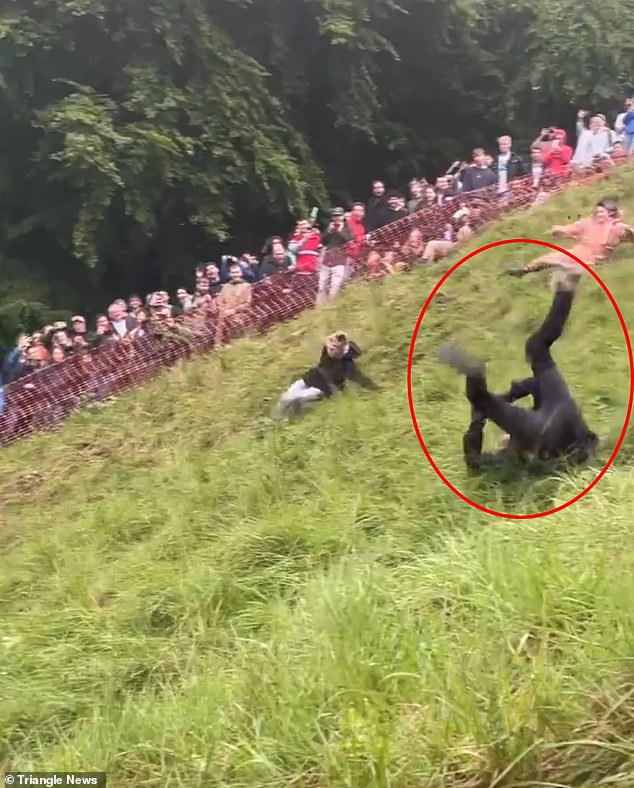 The American student launched herself into the race down Coopers Hill two weeks ago, and snatched the title 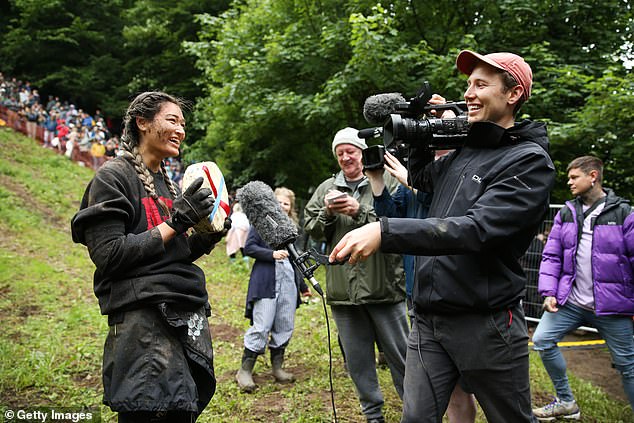 An ecstatic Abby showed off her cheese after the won the race. She revealed she practiced for the tumble and combed through footage of preview races before competing

Fiercely-competitive Abby, who has just graduated from North Carolina State University with a degree in Industrial Engineering, put in hours of practice rolling down hills.

She also spent endless evenings combing through footage of previous years’ races on the internet, studying the other cheese-loving athlete’s posture, footwork and rolling ability.

Abby also stocked up on protective gear, swapping out swimsuits and sun-hats intended for her hot European summer holiday for shin-pads and football socks.

But the prep didn’t stop there – once on English soil, Abby hot-footed it to Coopers Hill and cased the course, making notes on her preferred route. 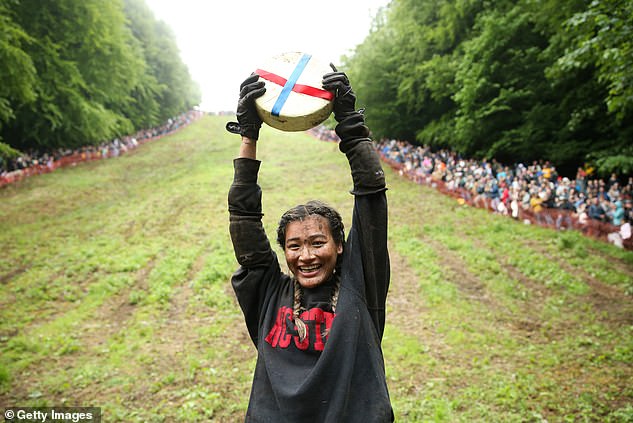 A wheel winner! Abby has sent the cheese to the US so she can eat it with her family once she’s done with her travels 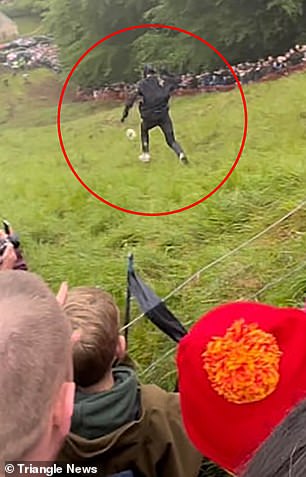 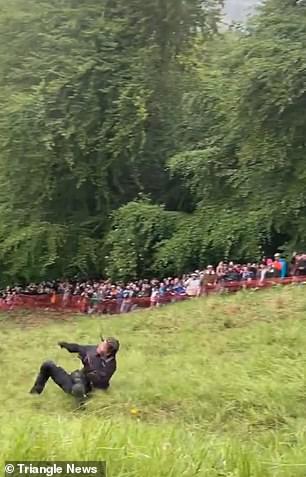 Abby admitted she said a little prayer the night before the race. She also revealed she was a competitive person and went to scope the hill to see how steep it is before she competed

She said: ‘I scoped out the hill to see how steep it was and how to get down.

‘Anything I do competition-wise I want to be very well prepared.”

The night before the race Abby psyched herself up watching an episode of Netflix’s We Are The Champions dedicated to the cheese-chasing sport.

She said: ‘I went in hoping to win it. I didn’t know I was going to, because I had no idea what the competition was going to be like, but I was hopeful.

‘I said a little prayer before.

‘After the race it just felt amazing. I remember after the last few rolls I got stopped by the rugby players, I looked at them and just said “Did I win?”.

‘Then the person brought the cheese out – it was almost like a dream.

‘I felt like I was in a movie. I had no idea that I was actually going to win this, and to have the cheese in my hands.

‘I put it over my head and started jumping because I was so ecstatic.’

Abby beat the other competitors in the women’s race with an impressive time of just 15 seconds to hurtle down the hill.

But incredibly she still hasn’t sampled her prize – posting it back to her parents in the States to enjoy as a family when she returns to start her new job as a tech consultant in a few months.

She said: ‘I wanted to open it with my family – we have always loved cheese growing up and we have our charcuterie platters and a little happy hour with cheese and wine so I thought that would be great.’

And the North Carolina-native is even thinking about bringing the sport home with her.

She said: ‘I don’t know where we would do that – although it would be fun.

‘I feel like it’s such a uniquely British thing, so I wouldn’t want to take it away from England.’