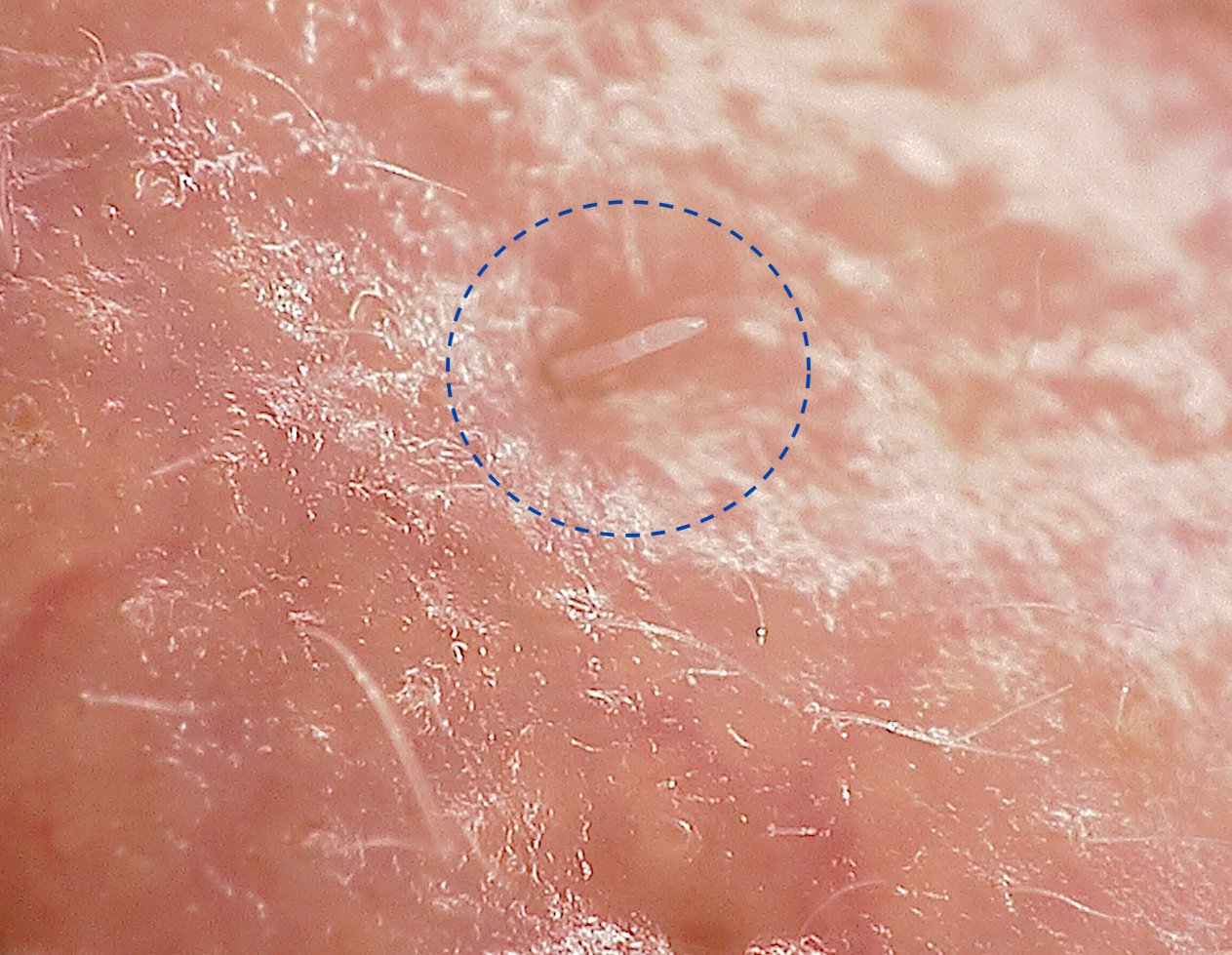 Tiny eight-legged creatures have sex on your face while you sleep, reveals new research.

The mites, invisible to the naked eye, are in the skin of all humans – and have bizarre mating habits.

Entwined couples cling on to our hair as they copulate – the bug world’s version of ‘swinging from the chandeliers.’

They are passed on during birth and carried by almost every person. Numbers peak in adults as pores grow bigger.

Now scientists have lifted the lid of the secret lives of the critters – from body features to their evolutionary future.

The first ever full DNA analysis shows they are becoming such simplified organisms they may soon become one – with us.

Co lead author Professor Alejandra Perotti, of the University of Reading, said: ‘We found these mites have a different arrangement of body part genes to other similar species due to them adapting to a sheltered life inside pores.

‘These changes to their DNA have resulted in some unusual body features and behaviours.’

There are more than 48,000 species of mites – two of which live on our faces. They can only be seen under a microscope – and look like wall plugs.

A long cone-shaped body is propped up by stubby legs at one end. We spend more time with the weird creatures than any other animal.

They even protect against acne and scarring by keeping pores unplugged.

Mites are relatives of spiders – and can be found buried head-down in our hair follicles eating the oils we secrete. They hook up with each other near the surface.

Their existence is isolated with no exposure to external threats, competition to infest hosts or encounters with other mites.

Genetic reduction has enabled them to survive with the minimum repertoire of proteins – the lowest number ever seen in mites.

Tiny legs are powered by just three single cell muscles. The mites lack UV protection and have lost the gene that causes animals to be awakened by daylight.

They have also been left unable to produce melatonin – a compound that makes small invertebrates active at night.

But they are able to fuel their all-night mating sessions using the melatonin secreted by human skin at dusk.

Males have a penis that protrudes upwards from the front of their body. They have to position themselves underneath the female when mating – and copulate as they both cling onto the human hair.

One of their genes has inverted, giving them a particular arrangement of mouth-appendages extra protruding for gathering food. This aids their survival at young age.

The mites have many more cells at a young rather than adult age – countering the previous assumption parasitic animals reduce their cell numbers early in development.

It is the first step towards the mites becoming symbionts – very closely associated with its much larger human host.

The lack of exposure to potential mates that could add new genes to their offspring may have set mites on course for an evolutionary dead end – and potential extinction.

The phenomenon has been observed in bacteria living inside cells before – but never in an animal.

Some scientists had assumed the mites do not have an anus and therefore must accumulate all their faeces through their lifetimes before releasing it when they die – causing skin inflammation.

But the study confirmed they do have anuses – and so have been unfairly blamed for many skin conditions.

Co lead author Dr Henk Braig, of Bangor University, added: ‘Mites have been blamed for a lot of things.

‘The long association with humans might suggest that they also could have simple but important beneficial roles, for example, in keeping the pores in our face unplugged.’

The study was published in the journal Molecular Biology and Evolution.