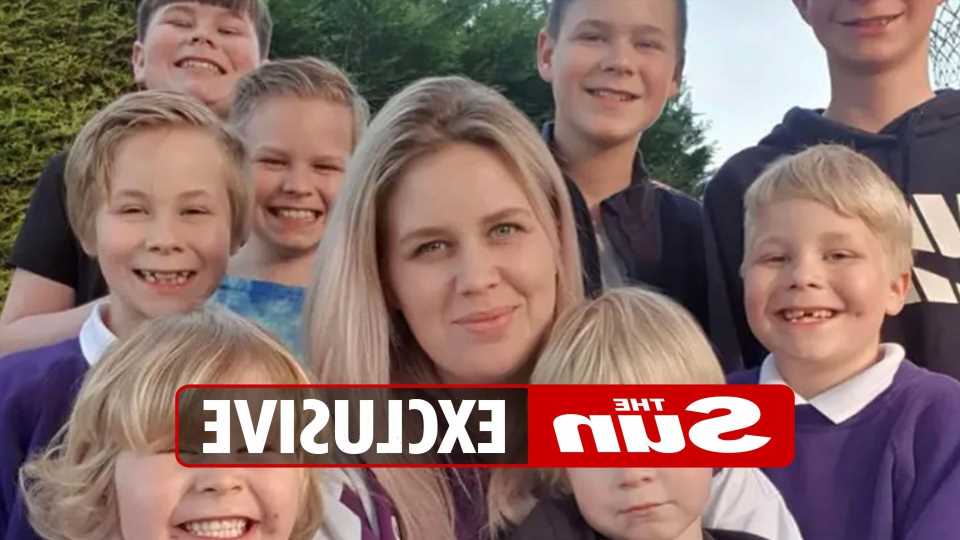 SINGLE and pregnant at 32 and already a mum to eight boys Rachel Parker, 34, from Hinkley, Leics, had – understandably given up on finding love.

But now she’s in a relationship and set to have her tenth child… and after having nine boys she's thrilled to announce she's finally expecting a GIRL. 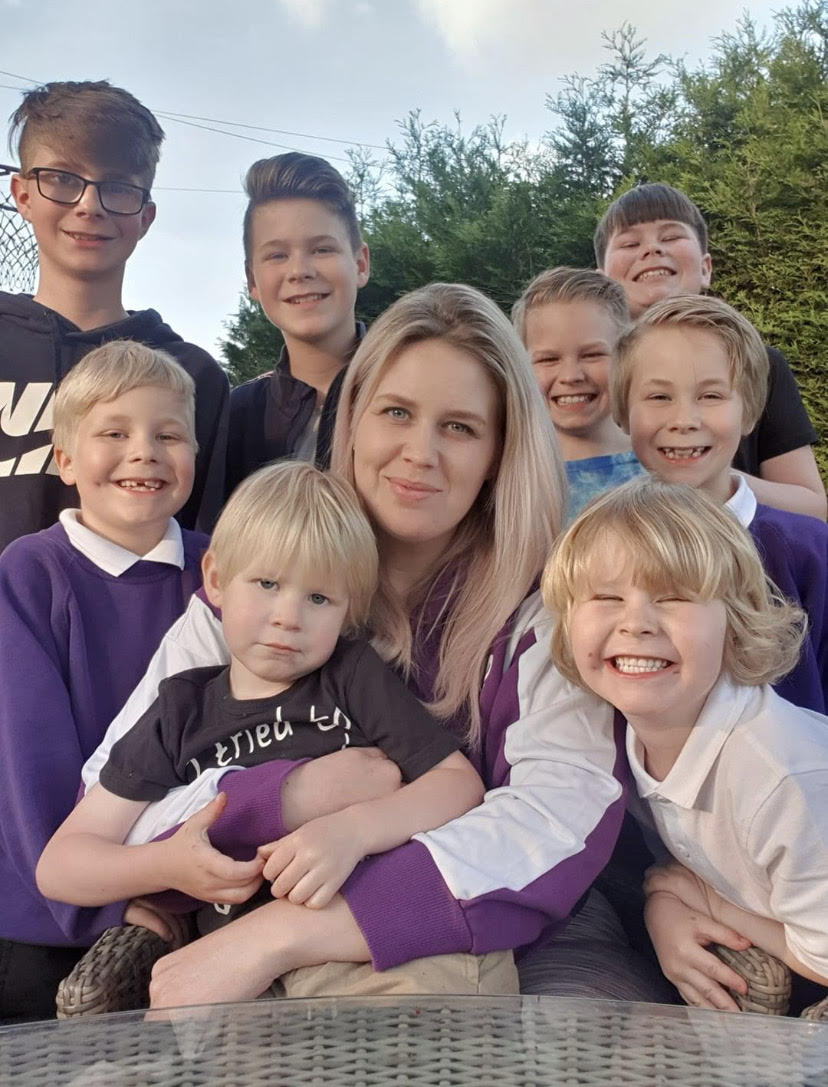 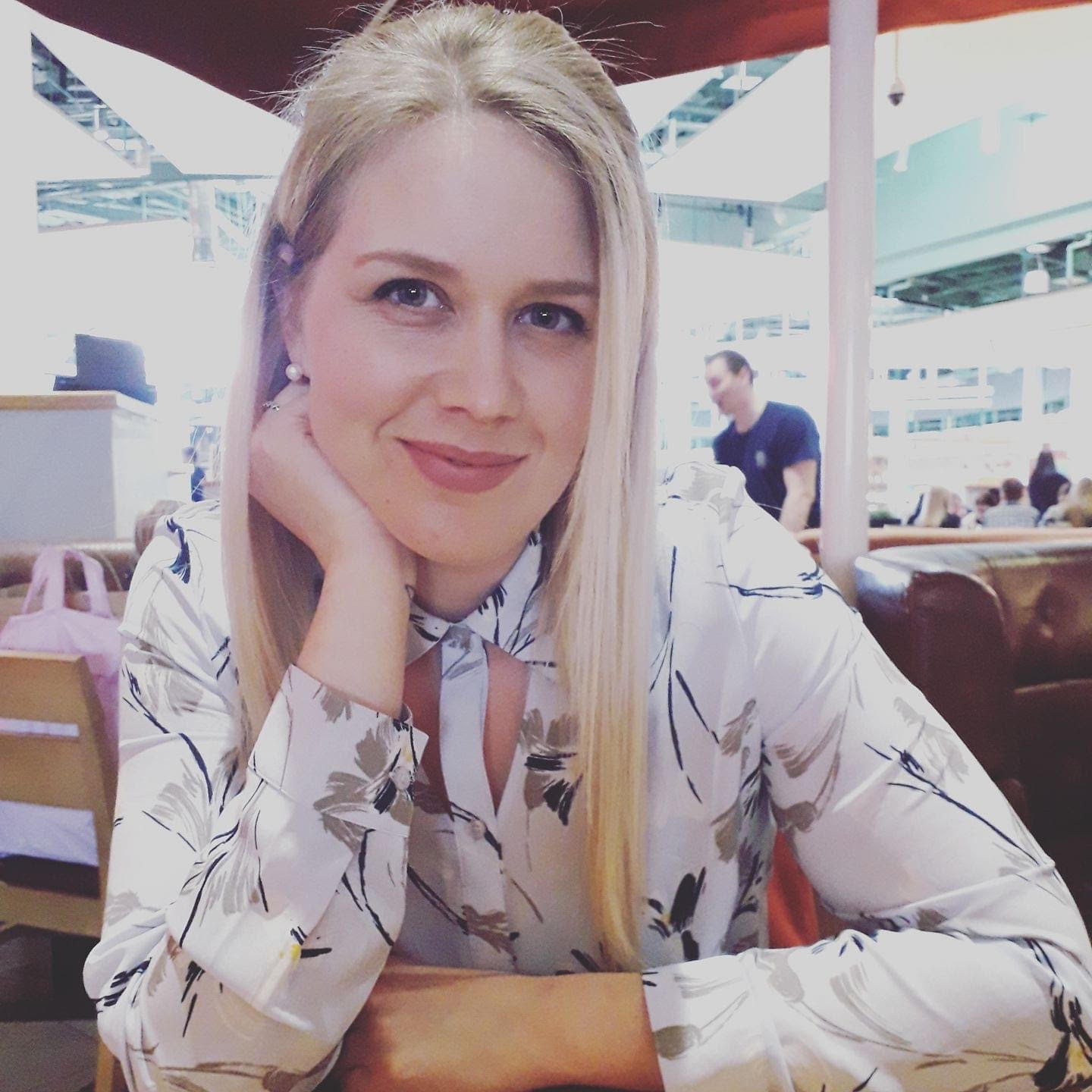 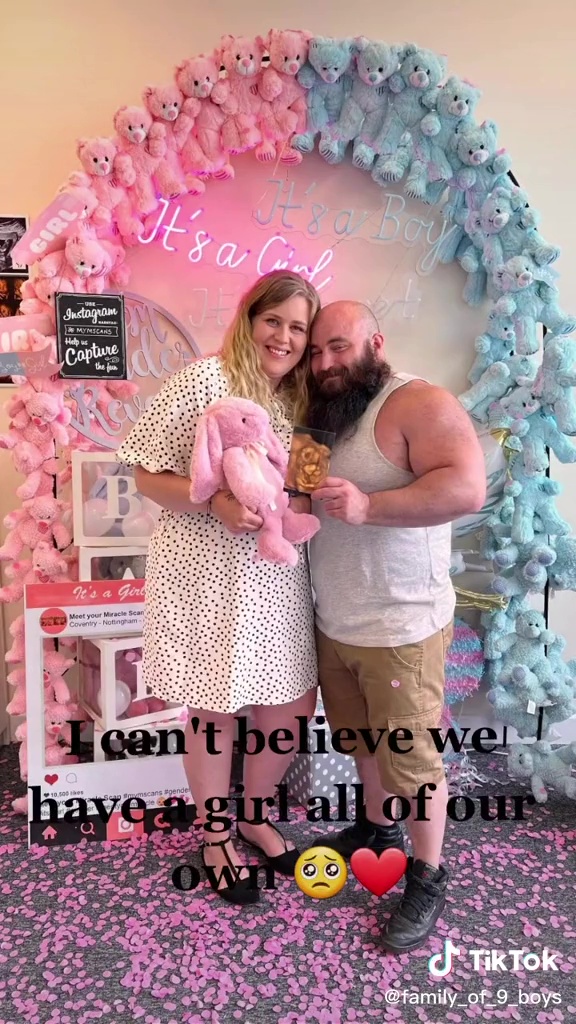 And I’d just learnt my brood was getting even bigger. 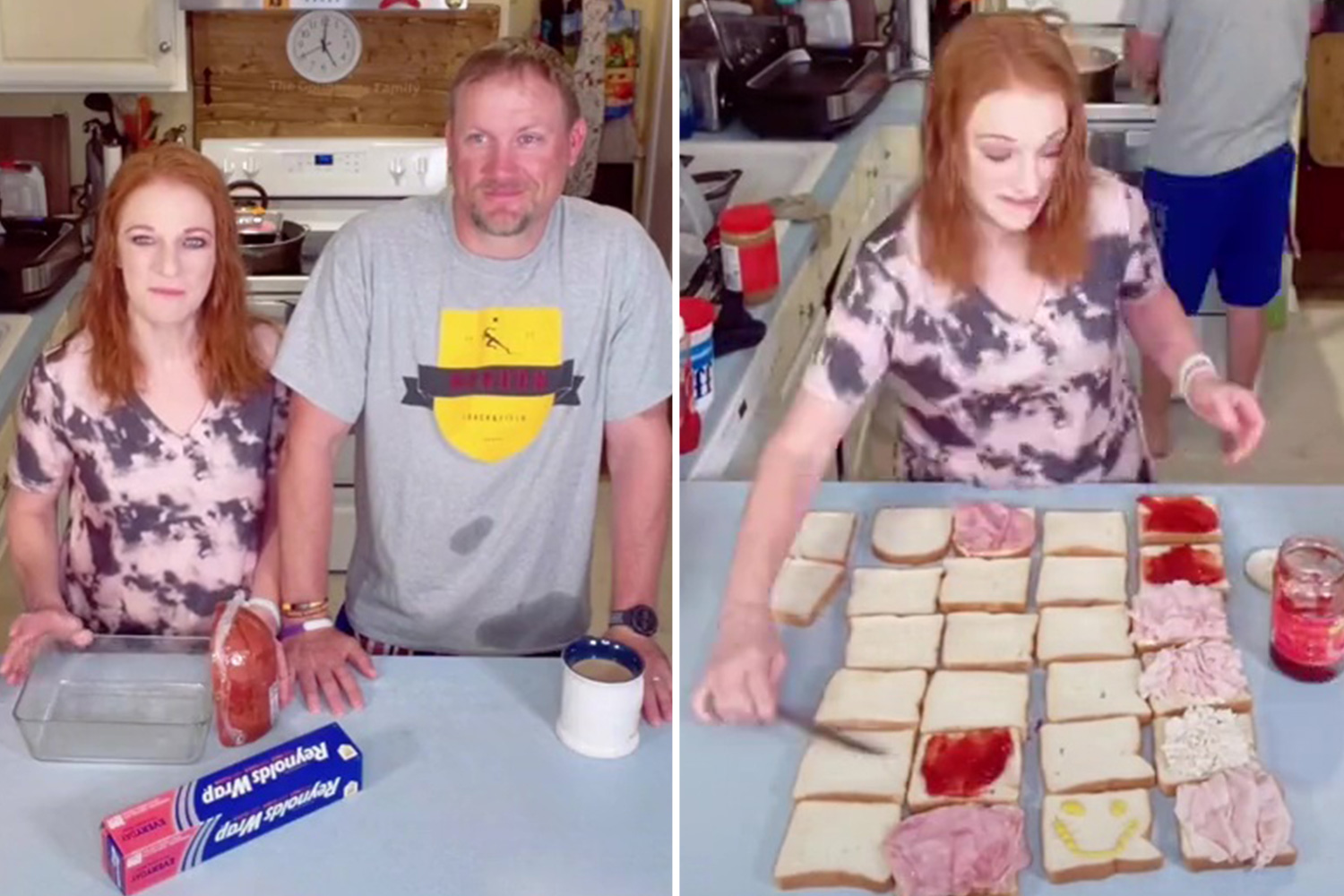 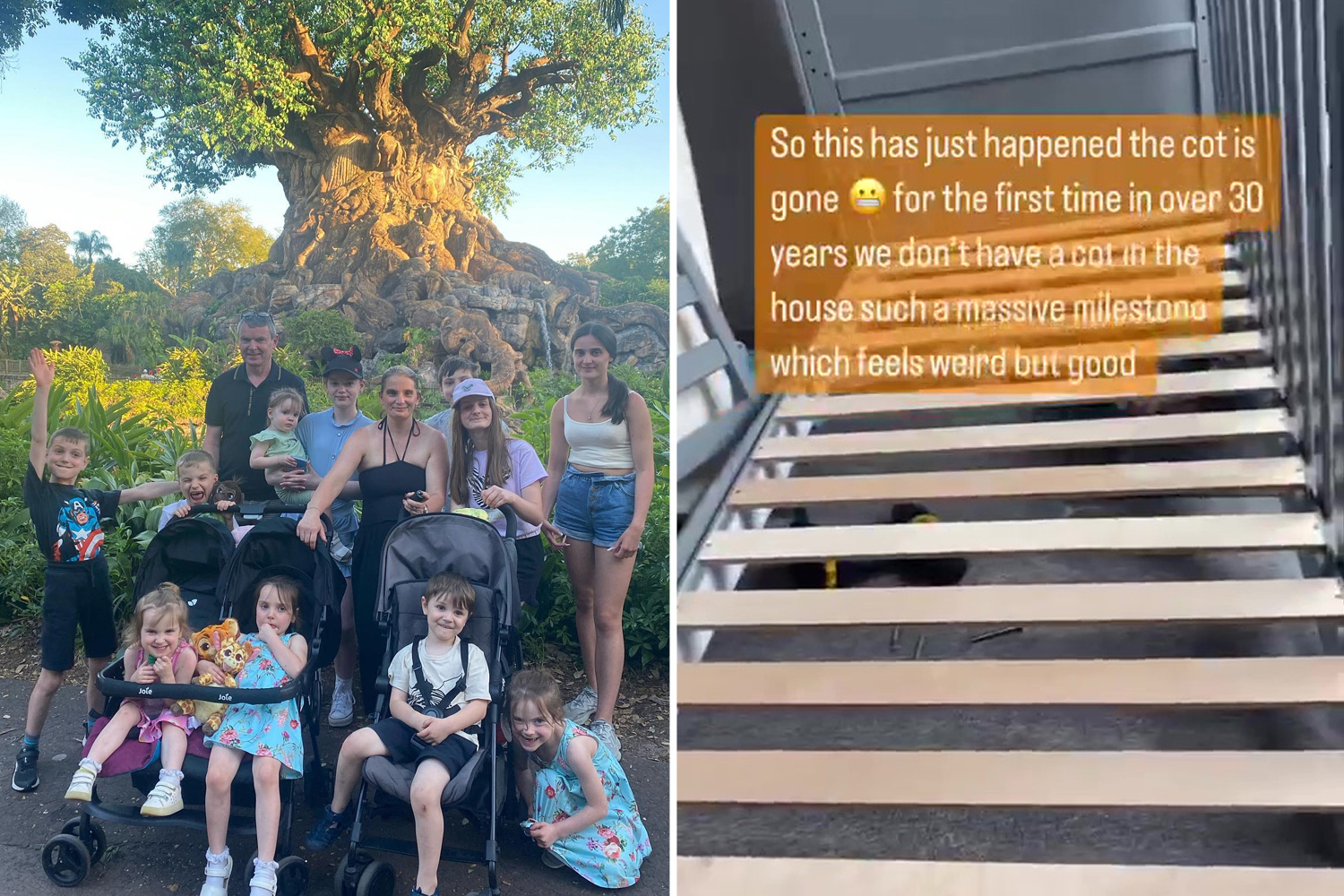 Secretly I hoped the baby would be a girl, although obviously you just want it to be healthy.

Either way, he or she would be very well cared for with an astonishing eight big brothers looking over her.

Being a mum is in my blood. I left school when I was 16 and started dating a lad from the same area as me. A few months later I fell pregnant unexpectedly, giving birth to Josh, now 17, in January 2005.

My family – while shocked – were supportive.

But for me it was more than life-changing. I knew that motherhood was my destiny.

In September that year I married the kids’ dad in a simple registry office. Then it was back to babies and bottles. But before long I was pregnant again and Charlie, now 13, arrived in November 2009.

By 19 I had four under four and nothing stressed me. I ran the house with military precision. I bottle fed so my husband, mum, sister and friends could help.

Pals were at college or starting jobs and I was knee-deep in nappies – but I loved it.

I was regularly complimented on how well behaved my brood was and I adored it. ‘Your boys are lovely,’ was something I heard so often and it made me smile every time. I was very proud.

Strangers were stunned when they discovered my age.

I wasn’t criticised or bullied. I looked older and having four kids meant people automatically assumed I was.

While my former school mates were out clubbing and holidaying in Ibiza I was changing dozens of nappies, potty-training, making lunches and getting by on three or four hours sleep and wouldn’t have changed a thing.

I was 20 when Archie, now 11, was born. By this point we were in a three-bed council house. It was a tight squeeze but we managed.

I knew that motherhood was my destiny.

There were a lot of questions about me constantly having boys. ‘Can’t you make girls?’ friends teased me and I genuinely thought I couldn’t.

I can’t deny I always smiled hearing the sonographer say ‘it’s a boy’ when I went for a scan… I didn’t expect anything else.

Sadly after Finley I had a miscarriage but in June 2014 Henry, now eight, arrived healthily a little boy, of course.

I was a mum of seven boys and turning 25.

I managed to keep on top of everything by sticking to a routine. And I had made my peace with being a boy mum. I still longed for a girl but loved being surrounded by tee-shirts, boys shorts and footie kits.

But sadly shortly afterwards my husband and I grew apart and I was single with eight boys.

Still, I didn’t plan on staying that way and in June 2019 I met another man on social media.

In February 2020 I discovered I was pregnant again, but sadly I broke up with my boyfriend.

I was a pregnant mum of eight boys and considered myself undateable when I got chatting to Shane, a friend of a friend in June 2020.

He was a great listener but it was all above board.

Until a few months in we realised our friendship had turned into love.

Shane, who doesn’t have children, was there when Reggie, now one, was born, and is an amazing step dad to the boys.

And he was over-the-moon when he discovered on Mother’s Day we were having a child together.

This month he came with me for a scan.

Instantly I knew something was different about it, although I couldn’t put my finger on what.

Even so I was over-the-moon when the sonographer said the words I’d never heard before… ‘it’s a girl.’

I was in total shock before crying – tears of joy!

I will be 34 when she arrives and a proud mummy of nine boys and one girl.

She’s our Christmas gift and will have nine super protective brothers and one super proud daddy.

We live in a six-bedroom house which I got on a council house-swapping site.

I’m so proud of my lovely family.

They tidy their rooms every day, make their own beds and the oldest  four help with the washing and folding.

They all help each other with homework and chores.

One weekend Shane  does a Saturday morning fry up for everyone.

One Sunday he treats me to cheese on toast in bed.

We spend £250 a week on groceries. Tescos and Aldi are the best for deals and I make all our meals from scratch.

I love using a slow cooker and my advice make two different meals at a time one for that day and one for the next.

So If I am making cottage pie I also make a chilli because the base is the same.

I make extra for Shane to take to work and for myself and Reggie the next day.

I make the boys packed lunches and everyone gets fruit and a treat,

The washing machine is the largest ten kilo size one I could find and is always on.

The boys aren't allowed consoles and XBoxes. Instead we have lots of family time and sports activities.

We go camping for holidays and I love gardening and growing flowers.

Money is always tight but we love it.

With boys there are never to hand me down clothes and shoes because as any parent knows boys will wear their clothes until they are trashed or full of holes.

I’m so proud of my massive family and everything I’ve achieved – they’re wonderful. 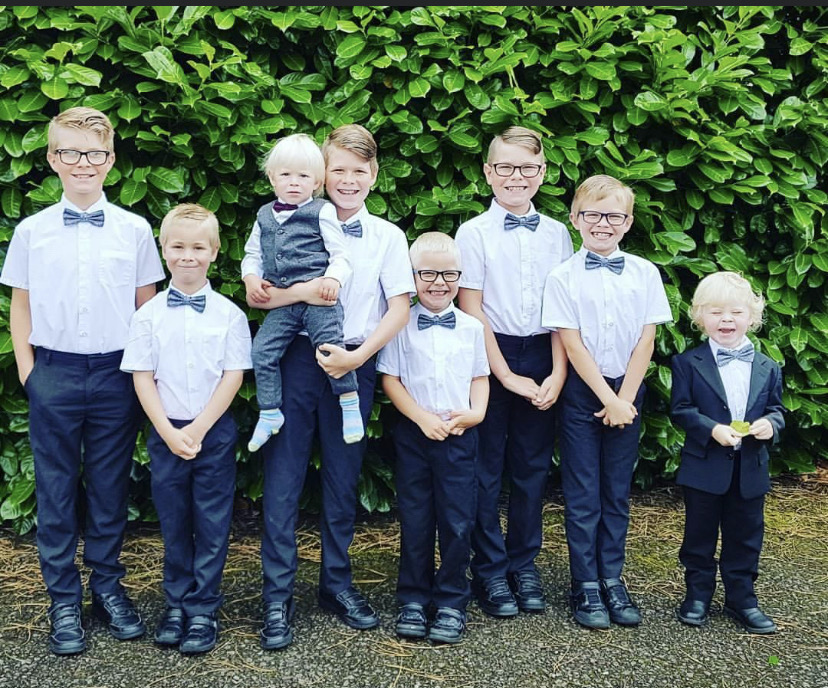 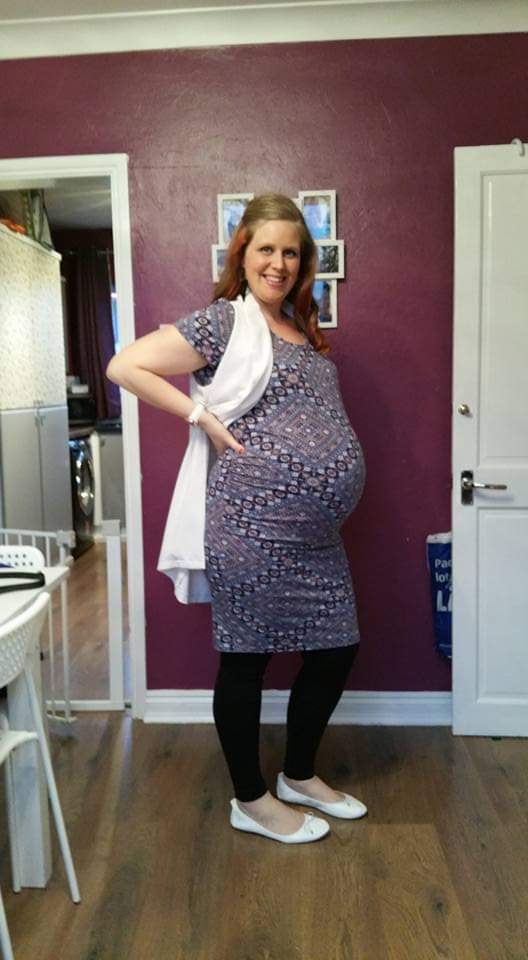 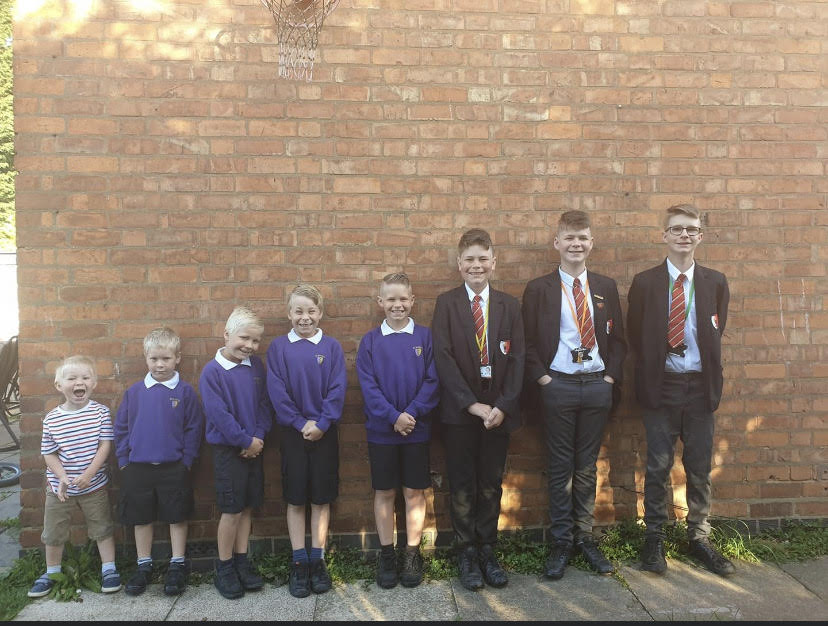 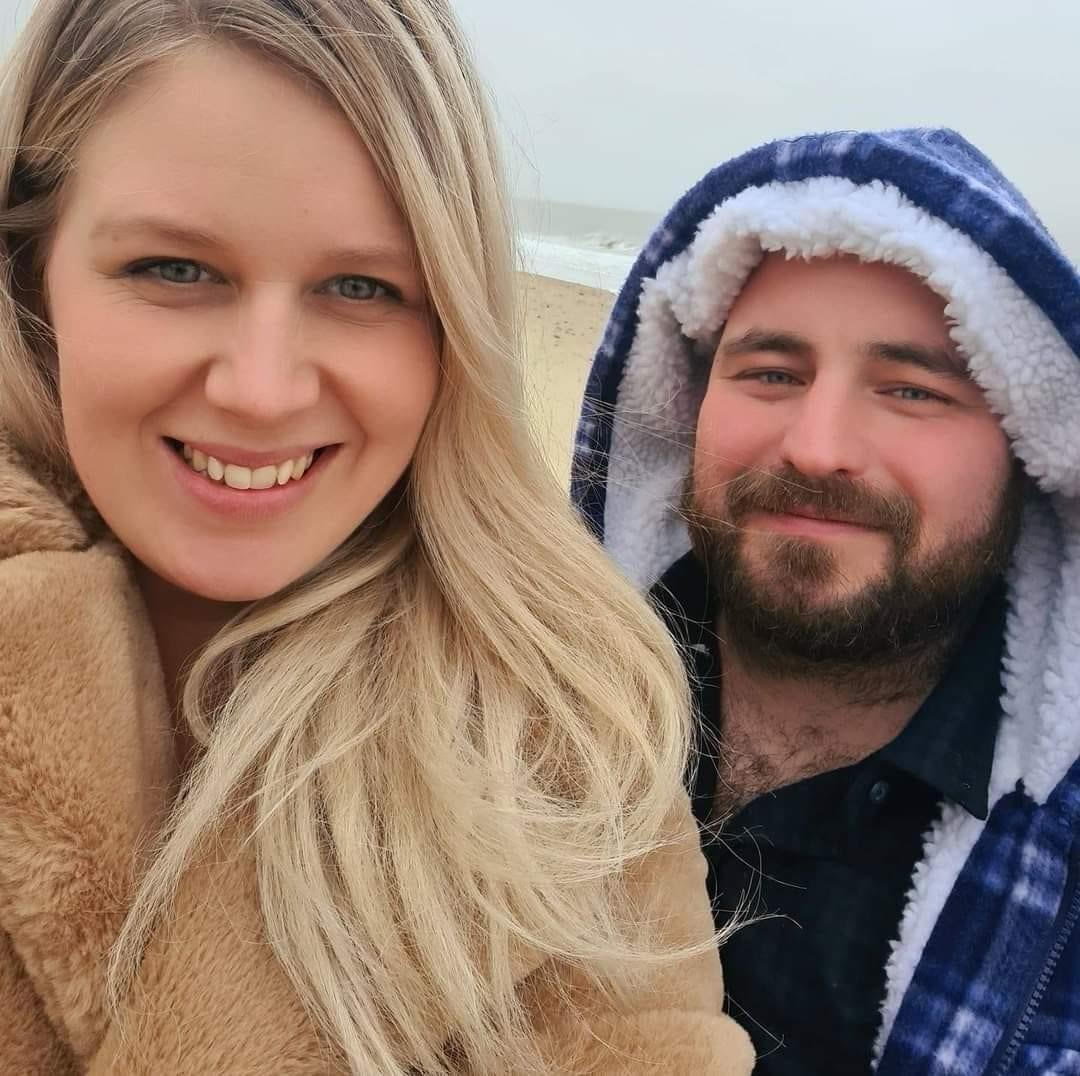