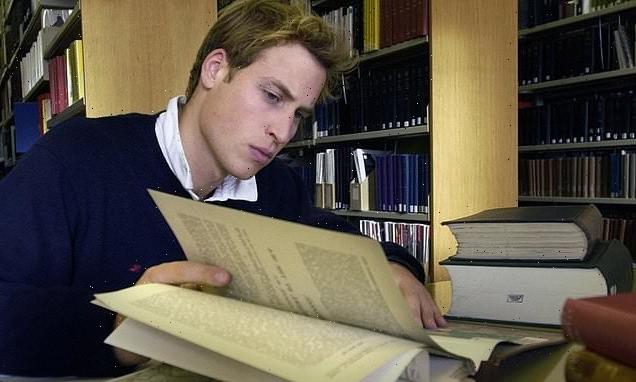 Modern art was such a snooze! Prince William admits he DOZED OFF during lectures at university

Prince William has told how he had to quit studying art history at university – as he kept falling asleep during lectures.

The Duke of Cambridge, who turns 40 today, has admitted he was ‘terrible’ for dozing off at the University of St Andrews.

William made the comments to The Big Issue seller Dave Martin, 60, after secretly joining him on his patch in Westminster.

The pair sold 32 copies in an hour, which Mr Martin said would typically take him a week to shift.

Afterwards Mr Martin handed William a set of abstract postcards he had produced.

William said he had enjoyed learning about Renaissance art but started to get ‘a bit dozy’ with modern art. He changed to study geography, graduating with a 2:1 in 2005.

To mark his birthday the duke is on the cover of The Big Issue, released yesterday. He said his 40th ‘was a good opportunity… to make sure we were highlighting something that matters to me’.

Prince William, pictured here studying in the main university library at St Andrews in 2004, said he was ‘terrible’ for dozing off during lectures

William told Mr Martin: ‘I studied a bit of art history at university.

‘I had to give it up – I kept falling asleep in lectures… terrible. We did a lot of Renaissance, which was amazing. But then once we got into modern art, I started to get a bit dozy.’

William enrolled at St Andrews in 2001. It was there that he met his future wife, Katherine Middleton, who also studied history of art.

During the interview, the Prince also encouraged people to take their ‘wireless earphones’ out of their ears and interact with one another more.

He added: ‘I’m lucky because I am who I am. Often, people are happy to talk to me. We’ve got to push back on the normality that is popping in your wireless earphones and wandering down the street, listening to music or on a phone.

‘In a city, you walk past hundreds of people every day and you don’t even look at them. Wouldn’t it be nice to find out a bit more about the people either side of you?’

To mark his birthday, he is pictured on the cover of the latest edition of the Big Issue. It comes after the Daily Mail told yesterday in our landmark ‘William at 40 series’ how he would be focusing on homelessness and housing in the coming year.

The prince said that his birthday ‘was a good opportunity… to make sure we were highlighting something that matters to me’.

During his time on the streets, he chatted to a number of people who fled the war in Ukraine as well as other supporters and he urged more people to buy the magazine.

He said: ‘I wanted to experience the other side and see what it was like to be a Big Issue vendor. My time was truly eye opening. I was lucky to join Dave on a warm, sunny day in June.

‘People recognised a familiar face and were happy to give me the time of day. But that isn’t the case for the vast majority of Big Issue vendors, who sell year round – including through the bleak winter months.’

There are around 1,300 Big Issue sellers. They buy magazines for £1.50 and sell them for £3, keeping the proceeds. The special edition is available across the UK.