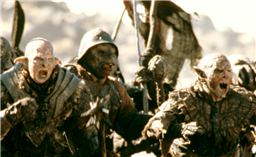 Amazon Prime Video’s “The Lord of the Rings: The Rings of Power” will harken back to Peter Jackson’s original trilogy by relying predominantly on practical effects and prosthetics in bringing the Orcs of Middle Earth to life. Jackson’s three “Lord of the Rings” films earned acclaim for showcasing practical creature makeup and prosthetics work, but Jackson notoriously went the CGI route in “The Hobbit” trilogy for Orc characters such as Azog and Bolg. Fans have long been critical of Jackson’s switch to CGI.

Speaking to IGN, “The Rings of Power” executive producer Lindsey Weber and prosthetics department chief Jamie Wilson assured fans that a more practical approach for Orcs was used on the Amazon Prime Video series. Visual effects were only utilized to make minor tweaks to prosthetics during action scenes or to showcase a group of Orcs so large in number that it would’ve been impossible to pull off the scene practically.

“When they are up close to the camera, Orcs are really practical and almost exclusively,” Weber said. “And the places where the visual effects team help were in more numbers when we need larger quantities than you could amass on a film set anywhere in the world. That’s what they sort of, when they come in and do some of, work their magic. We did a lot of planning so that we knew in advance which performers would be closest to camera.”

Wilson added, “We did decide from the outset that we would try and make this a very real show. So therefore, we tried to use real prosthetics and everything and minimize the visual effects, because there are hundreds of productions that are heavy on visual effects, and you can see it, that the human eye is getting better and better and knows what is real and knows what isn’t, because we are just getting so deloused with all this product that you begin to know.”

The duo said “a close link” existed between practical effects and VFX when bringing the Orcs to life. Wilson said, “A lot of [VFX work comes in] when you get into stunts and action, some of the stuff the human physically can’t do. So therefore it turns into a visual effect. So there was a lot of that. Also, a lot of stuff with prosthetics is beasts and creatures that then need further enhancements or whatever.”

“We [worked] really hard to make our prosthetics really thin and more comfortable for our performers and all of that,” Weber added, indirectly referring to what a nightmare some of the prosthetics turned out to be on Jackson’s original trilogy. “But there are times when they’re wearing things, teeth for example, and all sorts of other stuff that do make that hard. And over time, as you’re shooting, those things can just take on a little wear and tear as the day goes along.”

Perhaps Weber’s biggest revelation about the Orcs in “The Rings of Power” is that viewers will get to see female Orcs for the first time. The  executive producer would not disclose much information but said, “There’s some female Orcs that I truly loved.”

“The Lords of the Rings: The Rings of Power” is set to run for five seasons on  Amazon Prime Video. The first season kicks off September 2.