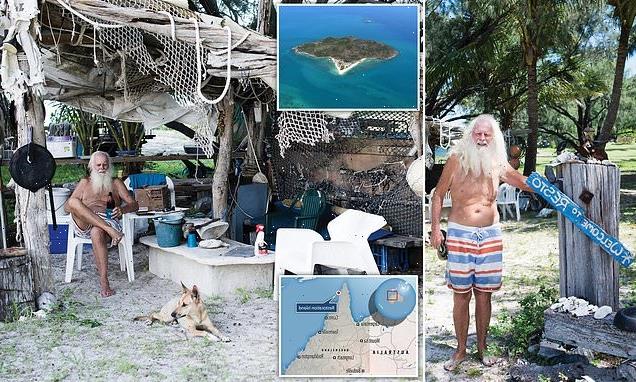 End of the castaway dream? Australian stockbroker who moved to private island after losing his riches and divorcing his wife in 1997 admits that he may need ‘some help’ and invites people to join him as he nears 80

A millionaire stockbroker turned island castaway has been forced to admit that he may need ‘some help’ as he nears 80.

David Glasheen, 78, has been living alone on Restoration Island, off the coast of North Queensland, Australia, after he lost his wealth in the ‘Black Tuesday’ crash in 1987.

In 1991, he divorced his wife and moved to the island on the Cape York Peninsula six years later, where he has been living ever since – but only with the company of his beloved dingoes and two female mannequins ever since.

But recently, he has admitted that his body ‘doesn’t work like it used to’ and revealed he has recently suffered a string of health scares.

‘I’m not 18 anymore, it’s heavier and harder. I fainted one day and then fell and broke my hip. The phones don’t work when you need them half the time, so the best security I could get is more people,’ he told news.com.au.

‘The wheels start falling off when you’re 80. That’s what happens.’

Mr Glasheen said he was looking for people to join him on the island because while they’re good company, dingos can’t call for help if he gets into trouble.

He said he would pay a middle-aged couple with the appropriate skills to help out on the island with stipends, as he can’t afford to pay a full salary.

The castaway has tried to employ some help using Gumtree, but is yet to find anyone willing to pack up and move to the remote island. 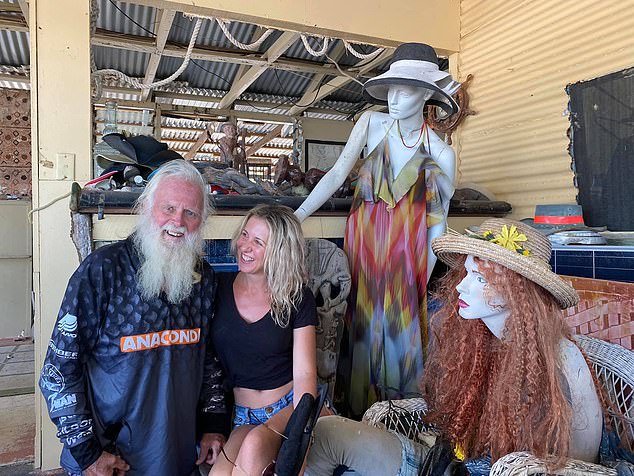 Mr Glasheen (pictured with a friend and his two mannequins, Miranda and Phyllis) has lived on Restoration Island in Far North Queensland since 1997 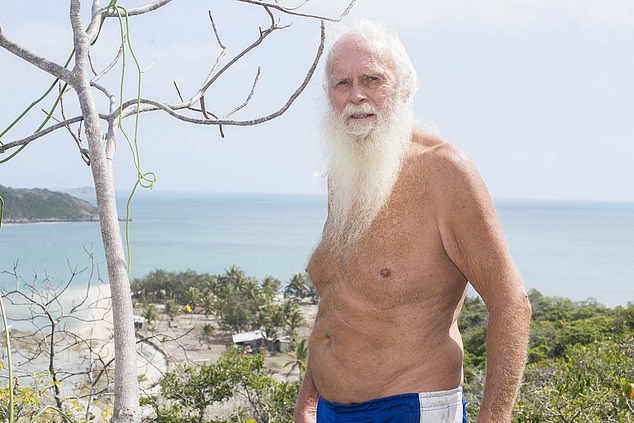 The castaway divorced his wife in 1991 and moved to the island on the Cape York Peninsula, where he has been living with only the company of his beloved dingos ever since

He admitted some ‘back-up’ was needed after he suffered a blood clot that could have killed him if left untreated one more day.

‘If things go wrong, your life is at risk and you’re really aware of it,’ he said.

‘The wild is pretty severe; it’s a tough world. Things are forever going wrong, and you’ve just got to deal with it.’

However, for Mr Glasheen, leaving his island home of 25 years is not an option. 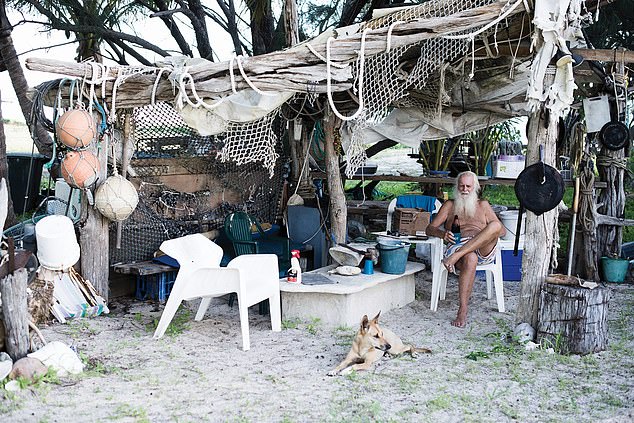 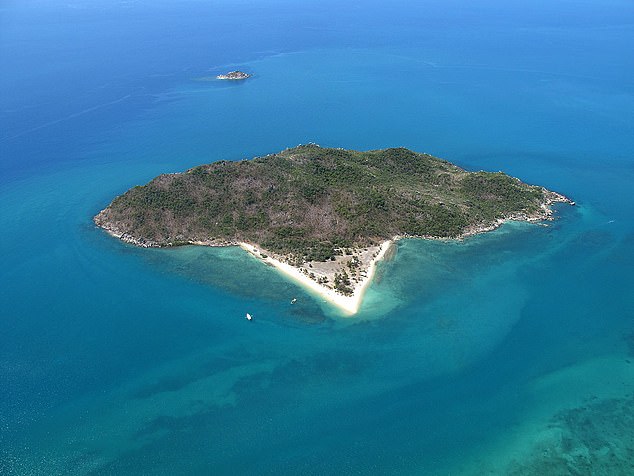 Mr Glasheen said he was looking for people to join him on Restoration Island (pictured) because while they’re good company, dingos can’t call for help if he gets into trouble

He has made a home for himself amid the rugged wilderness and says he wishes he had hadn’t been born in the city but raised on the island instead.

The castaway is tuned in to current events in Australia and beyond but admitted the Covid-19 pandemic hadn’t affected him at his remote home.

Speaking on Russia’s invasion of Ukraine, he said ‘men are the problem’ and called on women to take over and stop men from killing each other for their resources. 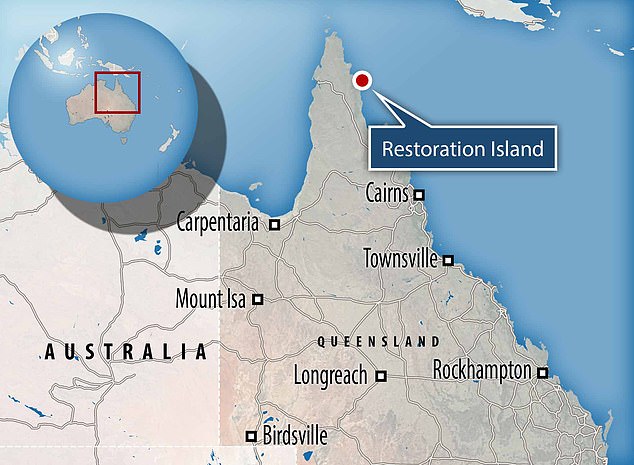 The castaway has made efforts to employ some help using Gumtree, but is yet to find anyone willing to pack up and move to the remote island off the Queensland coast

The castaway also shared some philosophical musings on society’s expectations of young men and women.

‘I wish I’d never been in the city, I wish I was born here in the bushes. We all do the same thing. We leave school. We’re expected to go into our mother or father’s businesses, or take over things from the family, or be doctors, lawyers or accountants or whatever.

‘And we did all that. Half of the marriages failed. And you’ve got all the broken families and kids everywhere. And we wonder why every one is a bit dysfunctional,’ he told news.com.au.

Mr Glasheen is due to turn 89 in August and will spend his birthday with his beloved dingo Zeddie, who replaced Polly after she was bitten by an adder snake.

He told MailOnline Travel in April, 2020 that he had first moved to the island with a suitcase containing ‘three shirts, two pairs of shorts and swimmers, a decent torch, a couple of books, a jar of chilli powder, some toothpaste and my toothbrush’.

The 78-year-old has an essential list of things that enable him to enjoy life in isolation, including a solar-powered internet connection, a stockpile of good books and two mannequins (Miranda and Phyllis) for company. 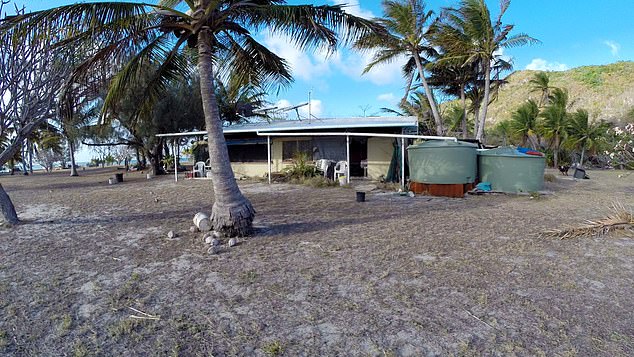 The 78-year-old has an essential list of things that enable him to enjoy life in isolation, including a solar-powered internet connection and a stockpile of good books 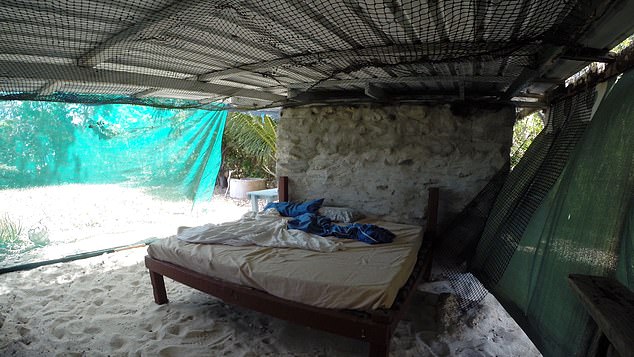 For drinking, he collects rainwater and water also comes from a catchment in the hilly areas of the island and says the ocean contains ‘all the protein’ he needs (pictured, his bedroom)

For drinking, he collects rainwater and water also comes from a catchment in the hilly areas of the island and says the ocean contains ‘all the protein’ he needs.

For that reason, fishing tackle, a cast net for catching bait, a flintstone for lighting a fire and a bush knife are among Glasheen’s essential items.

‘It’s like living in Jurassic Park,’ he says of his hunter-gatherer exploits.

The islander also has a stockpile of tinned and dried goods, which he picks up on an annual grocery shopping trip to Cairns using a small boat.

Before moving to Restoration Island he was leading a high flying city life in Sydney, living in a property overlooking the Harbour with his wife and two children.

But after the infamous Black Tuesday event in 1987, the businessman lost his wealth and the bank foreclosed on his property with his wife leaving him shortly after. 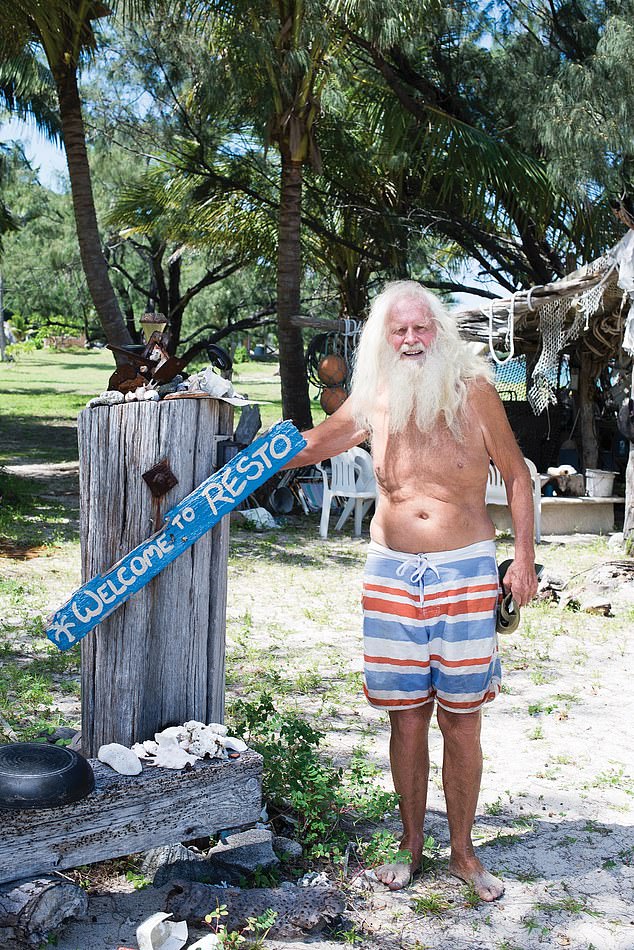 Before moving to Restoration Island Glasheen was leading a high flying city life in Sydney, living in a property overlooking the Harbour with his wife and two children 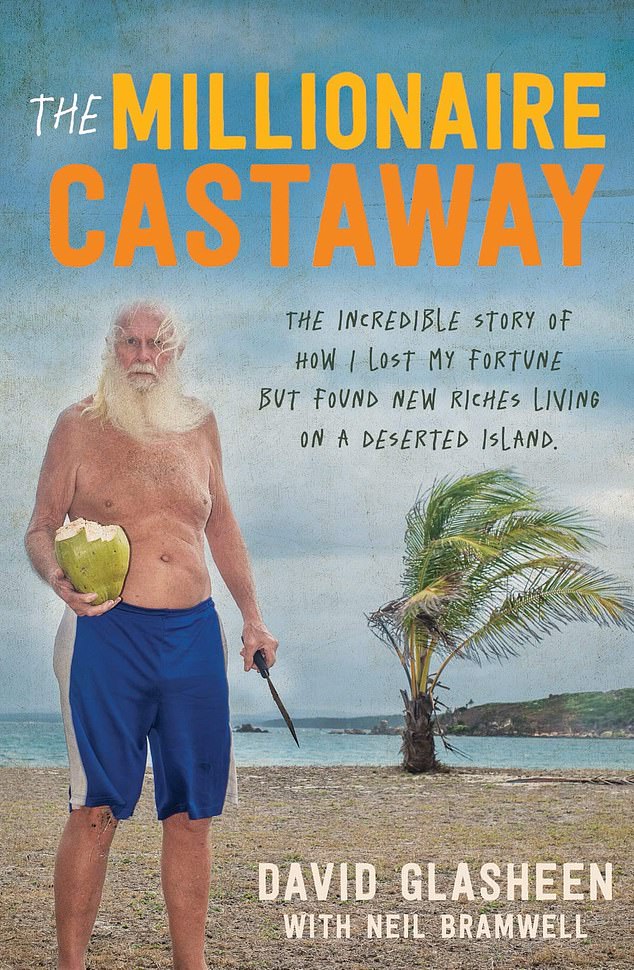 In 2019, Mr Glasheen penned a book about his story titled The Millionaire Castaway (pictured)

He moved to the island with his then partner Denise, but after she gave birth to their child she decided to relocate, saying the island life was not safe for a newborn baby.

In the meantime his has his two ‘mannequin girlfriends’ and numerous animals for company, including his trusty dingo, Zeddie.

In 2019, Mr Glasheen penned a book about his story titled The Millionaire Castaway.

‘Resto had affirmed my commitment to find a different way of life: one beyond the vicious cycle of pressure to earn enough money for a lifestyle by which other people measure your value and success,’ he writes.

‘I couldn’t bear the thought of this place being a rich man’s playground. This short time on the island had convinced me that Resto was somewhere I could live in utter contentment. Spending the day fishing and the night yarning was my idea of bliss.’

1. Make sure you have a good supply of fresh water

2. Have a backup generator for power or have a supply of fuel or solar power

3. Get a medical kit and a basic set of tools to fix things

4. For fishing, you will need tackle and a cast net for catching bait

6. Keep your personal hygiene in check and purchase soap, toothpaste and toilet paper if possible

7. Pack a collection of books and board games

8. Get a home beer brewing kit so you can enjoy an alcoholic beverage

9. Have a spare set of reading glasses in case you lose or break your current pair

10. Stash some silver coins, as money might come in handy and these will probably appreciate in value

11. A companion is good. I’m on the hunt for a nice lady but my two mannequins are good for the moment