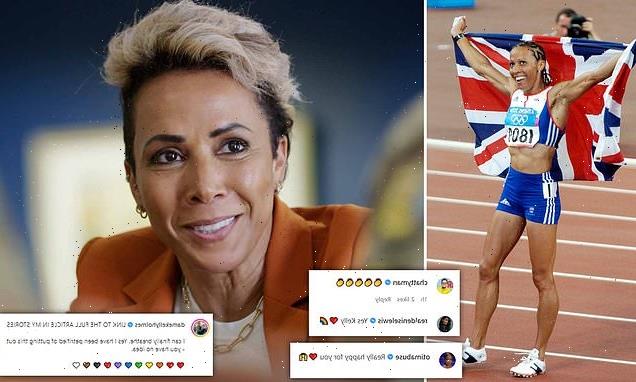 ‘Really happy for you!’ Alan Carr, Oti Mabuse, athlete Denise Lewis and Olympic sprinter Iwan Thomas among stars to share support for Dame Kelly Holmes, 52, as she comes out as gay

Alan Carr, Oti Mabuse and Iwan Thomas were among the famous faces to share their support for Dame Kelly Holmes after she publicly came out as gay.

The Olympic runner, 52, has spoken about her sexuality for the first time as she declared she ‘finally feels free’ after years of living a ‘secret’ life.

And her celebrity pals were quick to flock to her support and share their praise, with many gushing that they were ‘so happy’ for the athlete.

Speaking out: Dame Kelly Holmes (pictured this year) has publicly come out as gay and stars were quick to share their support

Kelly had spoken about coming out in an Instagram post where she wrote: ‘This journey has been the hardest part of life. Living with any kind of fear is debilitating. You and here everyday but not fully living every day.

‘I have lived in fear for 34 years and I am exhausted and don’t want to anymore. I hope those that read my story will help me through this next scary phase but also be there for others.’

And responding to her candid comments, Dancing On Ice’s Oti Mabuse shared her support, commenting on Kelly’s Instagram post: ‘Really happy for you.’

Alan Carr also sent his well wishes as he commented an array of clapping hands emojis underneath Kelly’s post.

‘Finally free’! The Olympic runner, 52, has spoken about her sexuality for the first time as she declared she ‘finally feels free’ after years of living a ‘secret’ life (pictured 2004)

Singer Lucy Spraggan added: ‘I love this and you. Welcome.’ Proud: The TV personality is currently working on a documentary called Being Me (pictured) 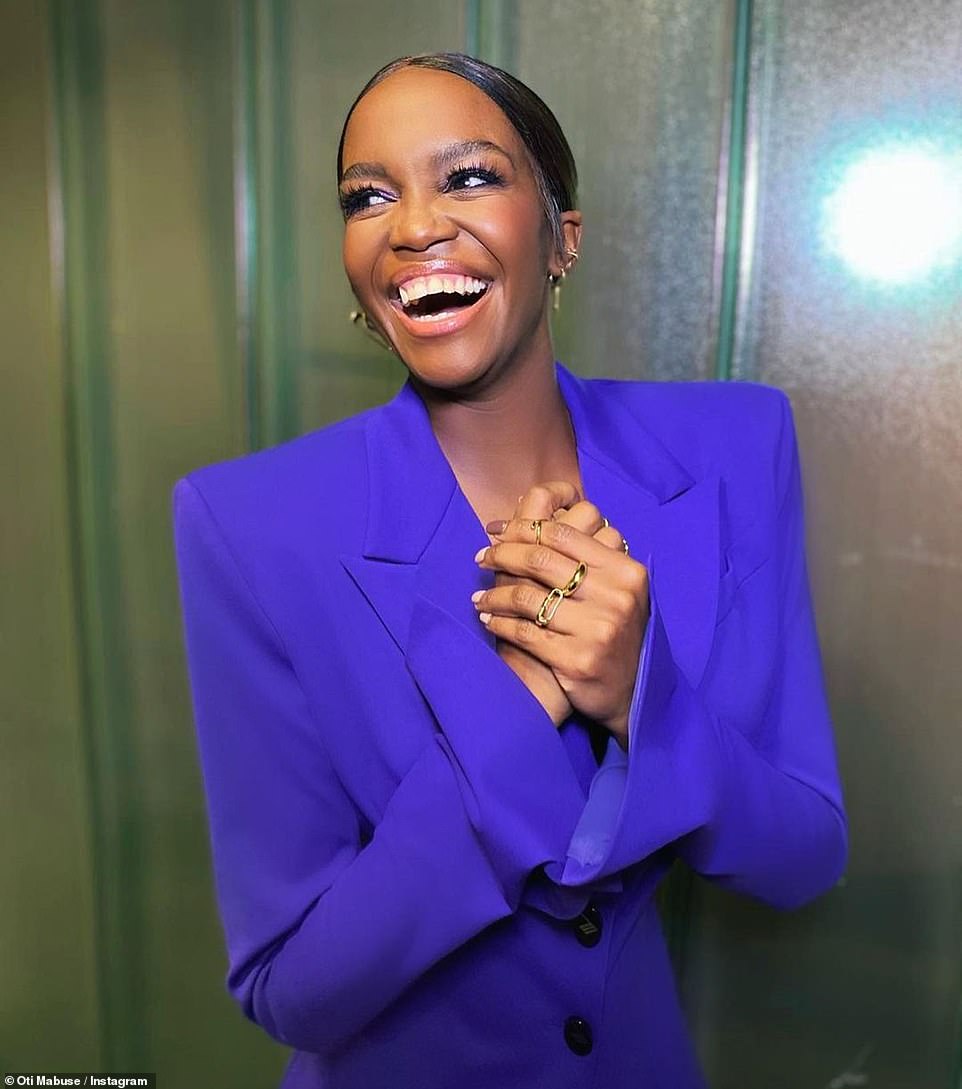 Pals: Dancing On Ice’s Oti Mabuse was quick to share her well wishes just hours after Kelly’s announcement, saying: ‘Really happy for you’

The outpouring of support came just hours after Kelly publicly came out as gay after living a ‘secret life’ for decades. 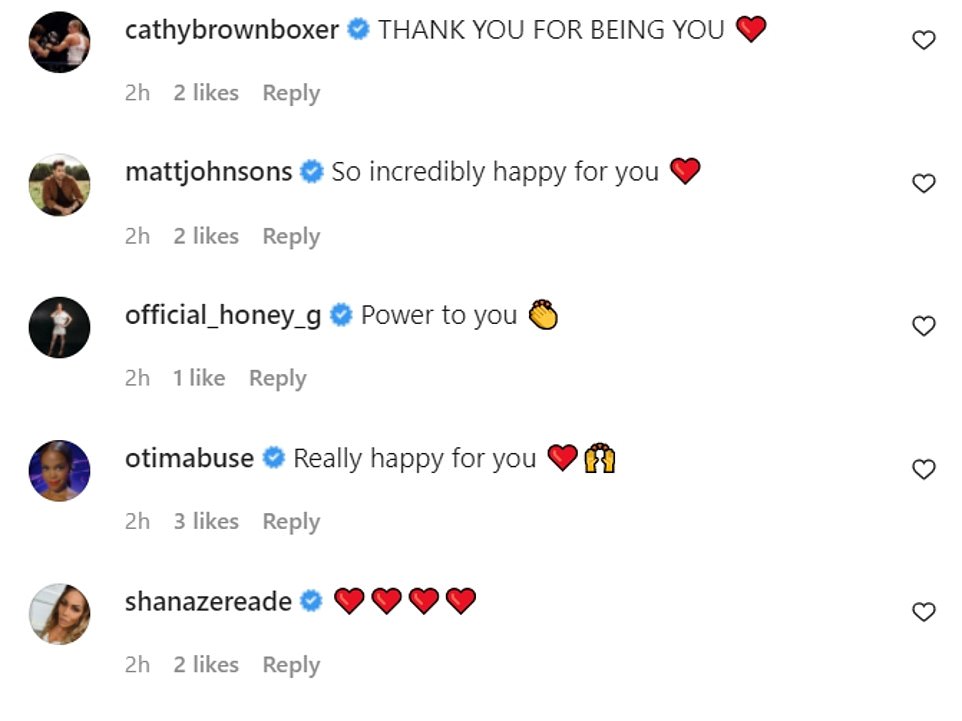 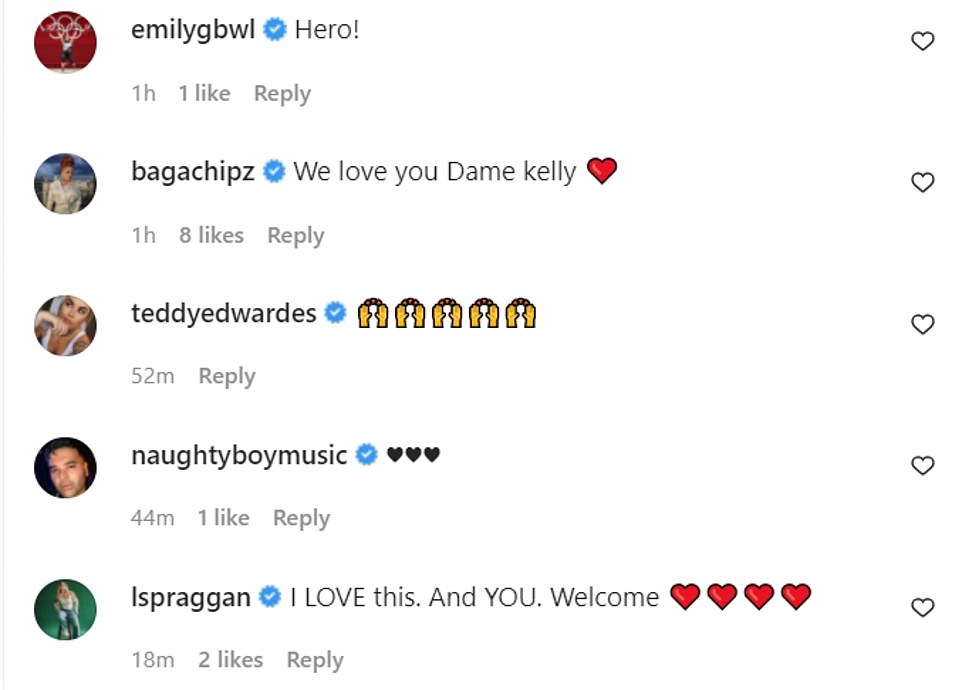 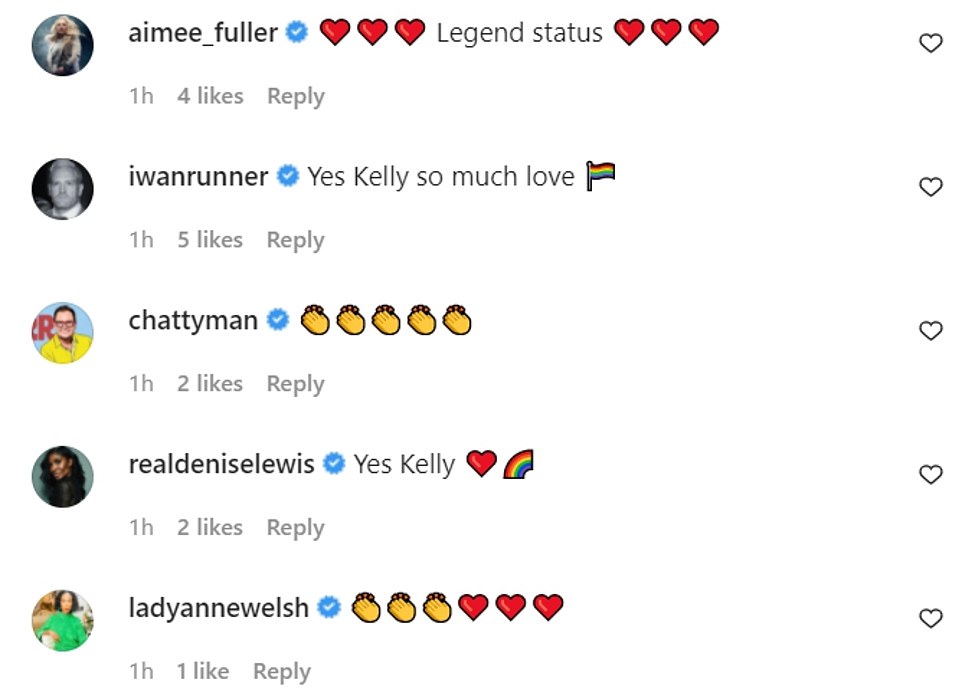 Love: Her celebrity pals were quick to flock to her support and share their praise, with many gushing that they were ‘so happy’ for the athlete 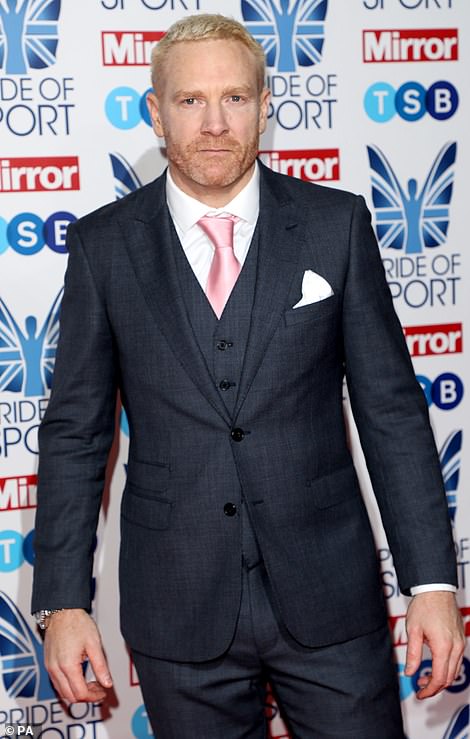 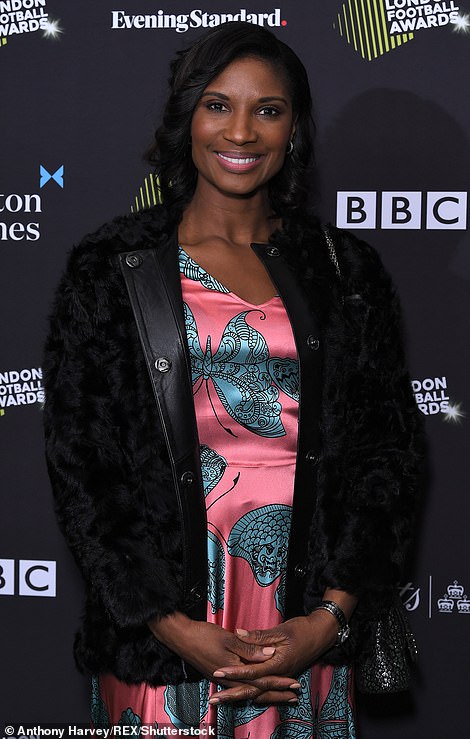 The athletics star admitted she was ‘fully aware’ of rumours about her sexual orientation but said she was happy to be coming out ‘on her own terms’.

Speaking to the Mirror, she said: ‘There have been lots of dark times where I wished I could scream that I am gay – but I couldn’t.

‘I needed to do this now, for me. It was my decision. I’m nervous about saying it. I feel like I’m going to explode with excitement. Sometimes I cry with relief. The moment this comes out, I’m essentially getting rid of that fear.’

Dame Kelly confirmed she has a partner but didn’t want to give any further details, admitting it is the first time she hasn’t introduced someone as a ‘friend or PA’. 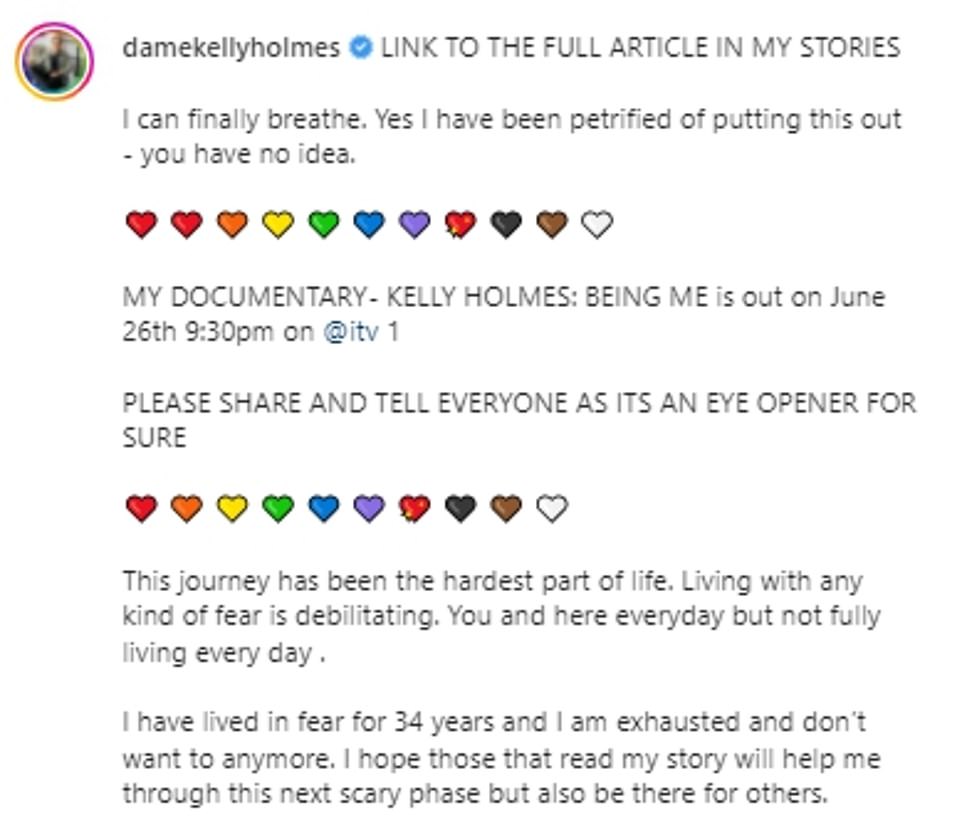 ‘I have lived in fear’: Kelly also spoke about coming out in an Instagram post where she said the journey had been ‘the hardest part of life’ and said living with fear had been ‘debilitating’ 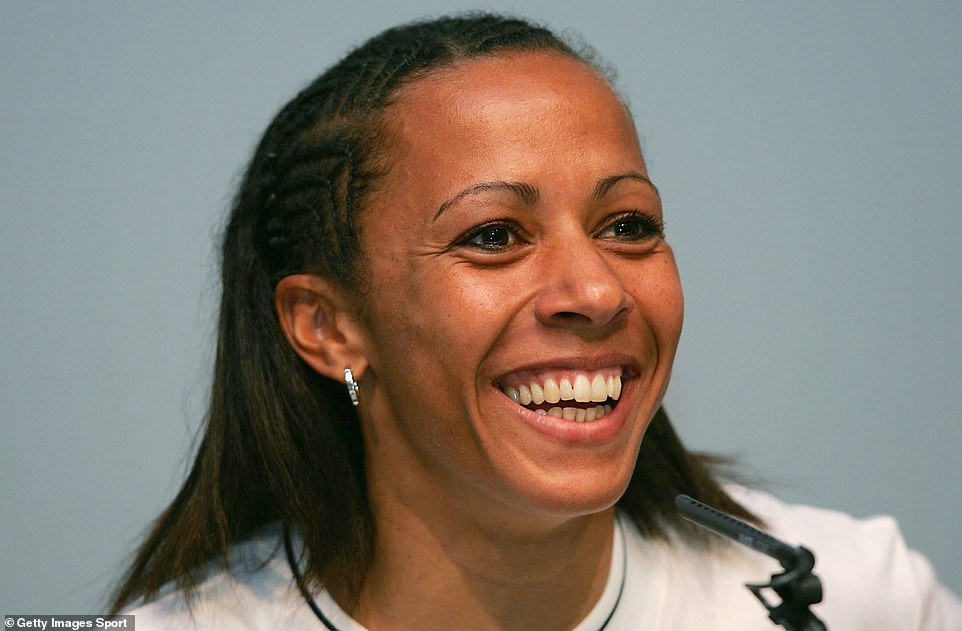 Smiling again: The athletics star admitted she was ‘fully aware’ of rumours about her sexual orientation but is now happy to be coming out ‘on her own terms’

She explained how her family and close friends have known for years she is gay but she worried about being in trouble for breaching retrospective rules in the Forces.

At the time, the forces had a ban on LGBT soldiers, which was only lifted in 2000. Kelly had relationships with other women during her 10 years in service.

Kelly, who chose to come out during Pride month, told how she first realised she was gay when she kissed another female soldier at the age of 17.

After the kiss, Kelly recalled writing to her stepdad who she shares a close relationship with to explain what had happened.

She was ‘confused and scared’ but Kelly revealed her stepfather accepted her straight away before coming out to the rest of her family in 1997. 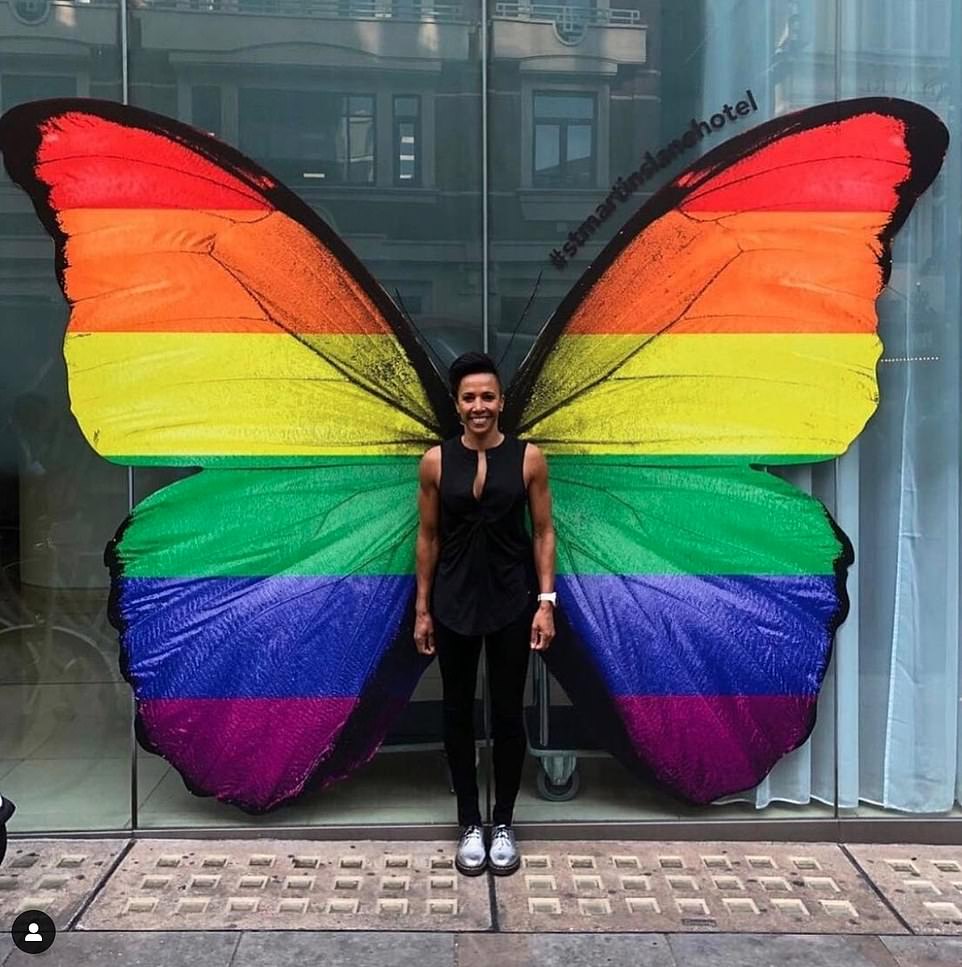 Being me! The TV personality admitted she kept her true identity hidden for years and experienced episodes of self-harm has she struggled to cope (pictured in 2020)

Touching on her previous relationships with women, she said: ‘No disrespect to them, but the relationships have only been a small part of my life.

‘They haven’t been in this fearful world with me for 34 years.’

Kelly, who was made a Dame in 2005, said she dated one woman between the ages of 27 and 32 but broke off the relationship in 2002 so she was able to focus on the Athens Olympics.

And even her massive achievement of winning gold at the 800 and 1,500 metres at Athens were ruined due to her fears of being outed.

The TV personality, who is currently working on a documentary called Being Me, admitted she kept her true identity hidden for years and experienced episodes of self-harm has she struggled to cope. 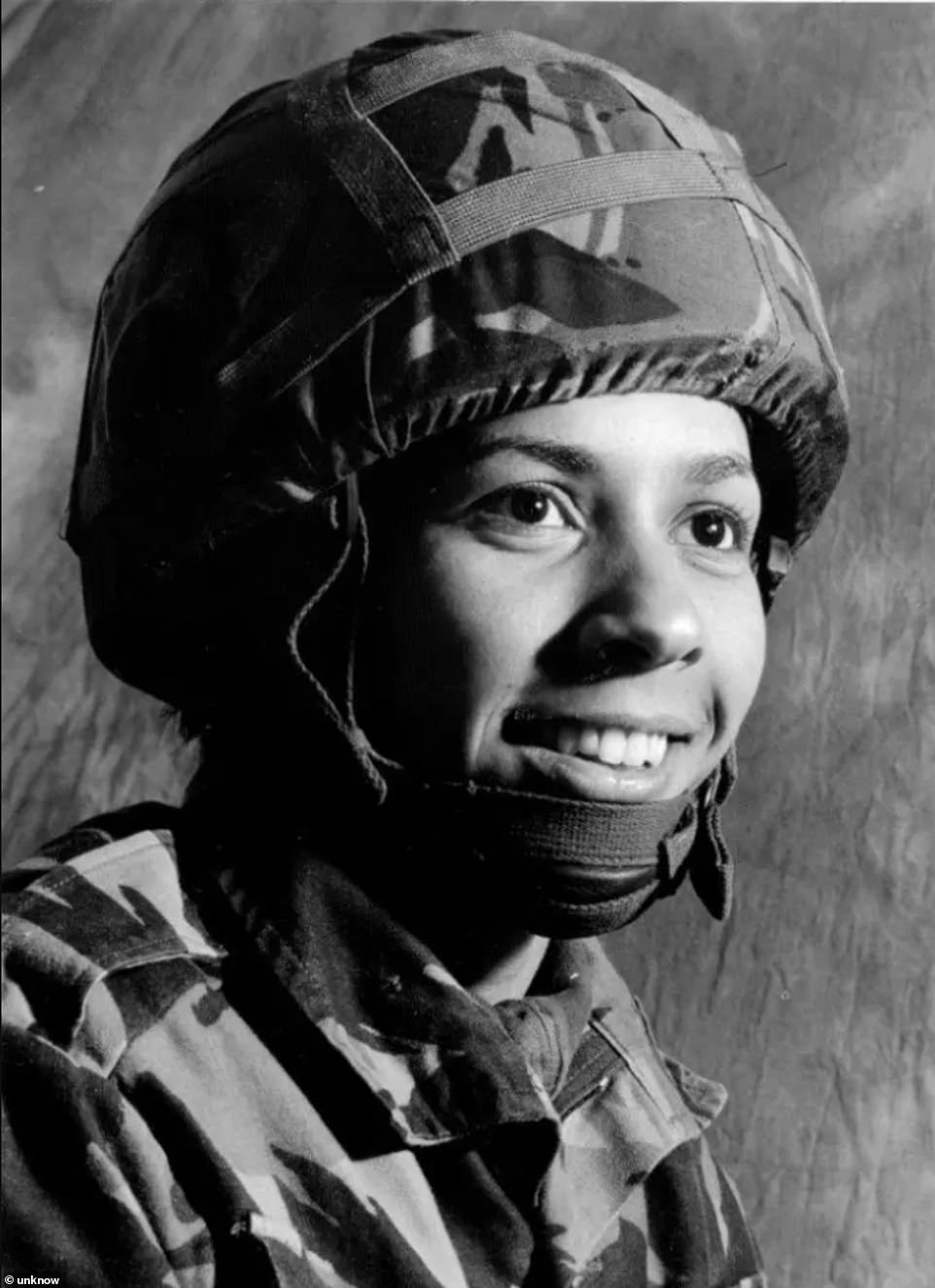 Historic: Kelly, who chose to come out during Pride month, told how she first realised she was gay when she kissed another female soldier at the age of 17 (pictured during her time in the Army)

Kelly confessed that even as she celebrated her gold medal in the 800 and 1,500 metres at the Athens Olympics she feared being outed as her fame hit new heights.

Before the 2003 World Championship finals, Kelly said she hit an all time low and self-harmed, recalling how she had ‘no control’ over herself.

Kelly didn’t ask for any support at the time out of fear she would be dropped from the Olympic team.

In 2018, Kelly was made an Honorary Colonel of the Royal Armoured Corps Training Regiment, which she viewed as another barrier for her coming out.

After suffering a breakdown in 2020, she made a call to a LGBTQ+ leader to question if she could still face repercussions over her Army relationships.

When she was reassured that she wouldn’t get in any trouble with the Forces, Kelly revealed she felt like she could ‘breathe again’.

Her documentary, which comes out on June 26, will see Kelly speak to LGBTQ+ soldiers and she said she was ‘gobsmacked’ about how much the Army has changed since her time serving.

She said she talking to some young people in the Forces for the documentary who weren’t even aware of the ban. 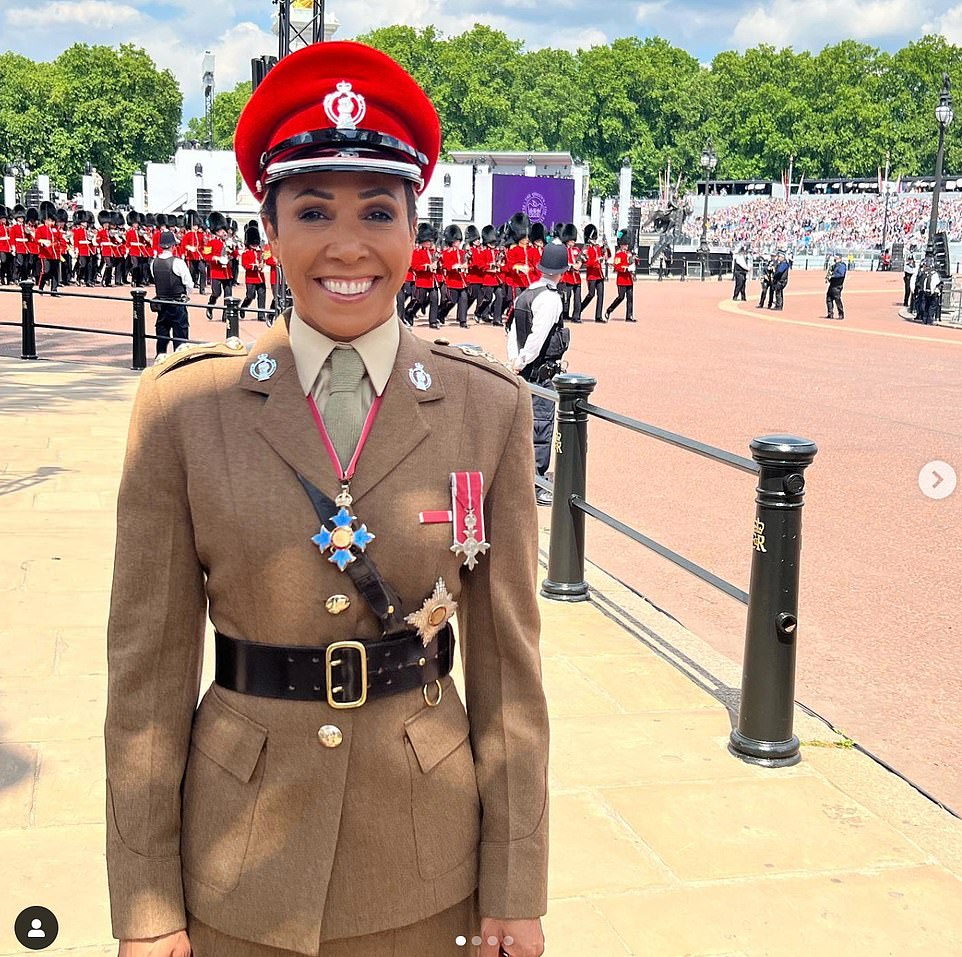 Army: Dame Kelly in her Colonel role at Trooping the Colour