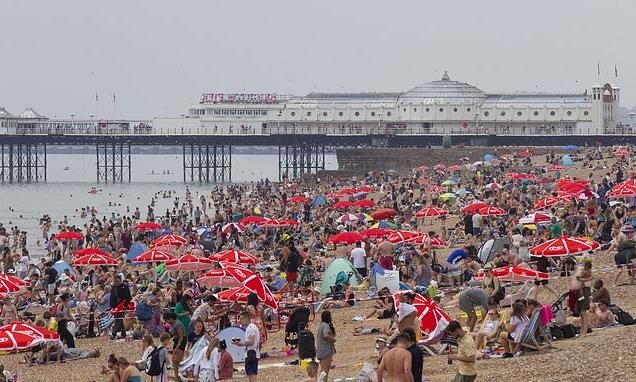 FOUR more heatwaves could roast Britain this summer, with each reaching ‘at least 28C’… as experts say we should start giving them names to ‘take them more seriously’

The break in the recent hot weather may be short-lived, with experts predicting four more heatwaves in the coming months.

Temperatures soared to as high as 32.7C (91F) on Friday, but it was far cooler yesterday, with much of the UK experiencing rain.

Further showers are expected today, with highs of 21C (70F). But forecasters say there will soon be a return to a ‘Spanish summer’ with further hot spells on the way.

In response to the warming climate, the Met Office recently changed its definition of a heatwave, meaning that it now requires certain thresholds to be met for three consecutive days.

Experts claim heatwaves should now be given names as they’re the future. 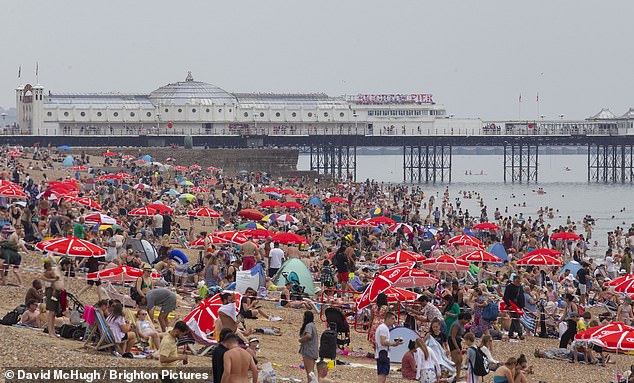 Crowds packed out the beach at Brighton on Saturday, with experts predicting the fine weather is set to continue with four more heatwaves in the UK over the summer months 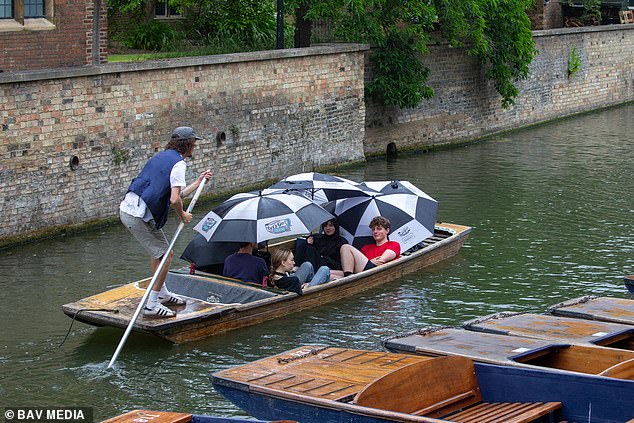 ‘We should be doing anything we can to raise awareness in the same way as we do for storms.’

Heat thresholds differ county by county, with temperatures of at least 28C (81F) required in London and the Home Counties, 27C (82F) across the rest of the South East and most of the Midlands, 26C (79F) in the North-West Midlands and Welsh Borders, and 25C in the North and West.

Leon Brown, from The Weather Company, the world’s biggest commercial forecaster, said: ‘More heatwaves imported from the Continent to the UK are forecast this summer, each reaching at least 28C – and likely higher – and each lasting several days.’

Mr Brown, the head of meteorological operations, said the next hot spell was forecast for early July, with another predicted for the second half of the month.

He added: ‘With heat building further in Western Europe by July and a similar air flow expected from Spain again, it would bring even hotter temperatures than on Friday.

‘We should see well into the 30s – 36C (97F) would not be at all surprising. A third hot period is due in August, with September having further hot spell potential.

‘Warmth can be brought to the UK in September by tropical storms tracking across the Atlantic.’ 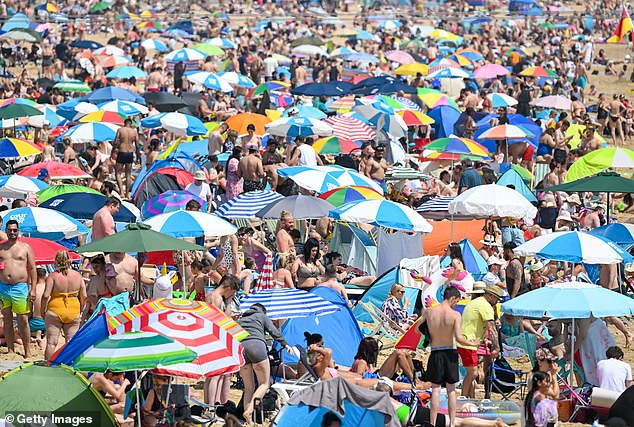 In contrast to Britain, many parts of mainland Europe continued to experience sweltering temperatures yesterday.

Outdoor public events were banned in parts of southern France, while Paris recorded its hottest ever June day with temperatures predicted to reach 42C (104F).

In Spain, temperatures were forecast to hit a scorching 43C, according to the government’s Aemet weather service.

Firefighters battled forest blazes in the north-west Sierra de la Culebra region which have forced some 200 people from their homes.

Meanwhile, water levels are so low across large stretches of Italy’s largest river, the Po, that locals have been able to walk through the middle of the expanse of sand, and wartime shipwrecks are resurfacing. 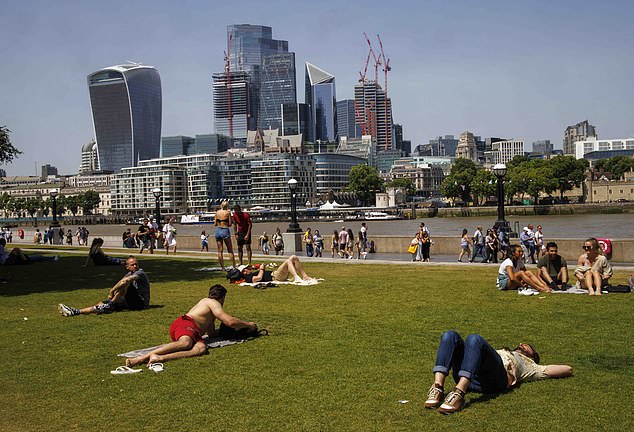 Temperatures are set to plunge across Britain by up to 13C (55F) today, meaning it will be a cool and somewhat soggy 17C to 21C for Father’s Day.

The South will be mainly dry from tomorrow and is set for temperature highs of about 26C (79F) by Wednesday, but the North faces further showers.

A Met Office forecaster said last night: ‘Rain in the far South on Sunday will be heavy in places, with temperatures much nearer normal, while showers are due in the North.

‘Rain spreads to the North West from Monday, with the South feeling warm in sunny spells by Wednesday.’