Victorians have reached for their spades and revived their vegetable gardens to beat the price shocks that have sent the cost of iceberg lettuce soaring to about $10 a head.

Some Melbourne nurseries say there has been a spike in demand for seeds and seedlings, and a drop in supply, as people look to their backyards, instead of shops, as a source of the green vegetable. 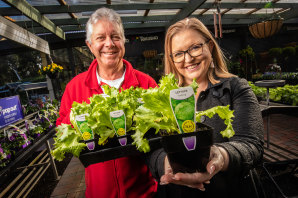 “Whatever you could buy now, I’d get in and buy,” was the advice of Mel Hossack, shop manager of Beasley’s Nursery in Warrandyte, in Melbourne’s north-east.

Hossack said sales of lettuce seedlings and seeds had at least doubled over the past few weeks and stock was becoming harder to come by.

She said Beasley’s had been selling out quickly, and at 3pm on Sunday, the centre had just five lettuce seedlings of the iceberg variety left.

The nursery could find it harder to buy seedlings from its suppliers in coming months because of demand on growers.

Jacqui Evans, a buyer at CERES nursery in Brunswick East, said the rise in lettuce sales at her nursery was substantial.

“In fact, it can be difficult for us to obtain lettuce seedlings from our suppliers at the moment, so I think the interest is quite broad.

“Customers have remarked that it’s a good idea to grow your own, where possible. It is at the best of times, but particularly now with the cost and the availability of things reduced.”

Bunnings general manager, merchandise, Adrian Pearce said: “We did see a significant increase in customers’ interest in gardening and growing their own produce throughout the lockdown periods, and we have noticed a further recent uplift with common seedlings, with lettuce increasingly popular.”

However, Kevin Parker, senior horticulturalist at The Greenery in Heidelberg, said growing your own vegetables was always popular, throughout the year. “We haven’t noticed, necessarily, an increase [in sales] because the price of lettuce has gone up.”

John Faulkner, membership officer of Knox Community Gardens in Boronia, said while he had not seen an increase in lettuce planting, the cost of lettuce and other vegetables had been a talking point among members.

“And some of our members are very smugly saying, ’Isn’t it nice it doesn’t bother us because we grow our own.”

He said the waiting list for the site, which has 150 plots, had gone from zero to nearly 40 people since the start of the pandemic.

Katya Dibb, a committee member of Pentridge Community Garden in Coburg, has noticed members planting a lot more lettuce. But she said it seemed more due to the COVID-19 lockdowns than store price rises.

“I think people weren’t comfortable going into the supermarkets, so if they could go outside and get their own stuff [from the garden], they were much more comfortable doing that.”

Professor Mark Howden, director of the Institute for Climate, Energy & Disaster Solutions at the Australian National University, said home gardens and community gardens were a good option for people who wanted to shore up their access to food, when available.

“There’s a good rationale for why people should be growing some of their own food without getting too carried away with it.”

The peak body for Australian vegetable producers, AUSVEG, said the cost of vegetables had more than doubled between 2006 and 2016.

Flavio Macau, associate dean in the School of Business and Law at Edith Cowan University in Western Australia, wrote on The Conversation website that prices would remain high because the underlying causes were not going away.

Half of the recent price rises were because of increases in the cost of transport, the cost of fertiliser, labour shortages and industry consolidation as smaller farmers left the business.

But the other half was climate change, not just higher temperatures but also the increased frequency of extreme events such as bushfires and droughts, and most recently the massive floods across NSW and Queensland.

Make the most of your health, relationships, fitness, and nutrition with our Live Well newsletter. Get it in your inbox every Monday.