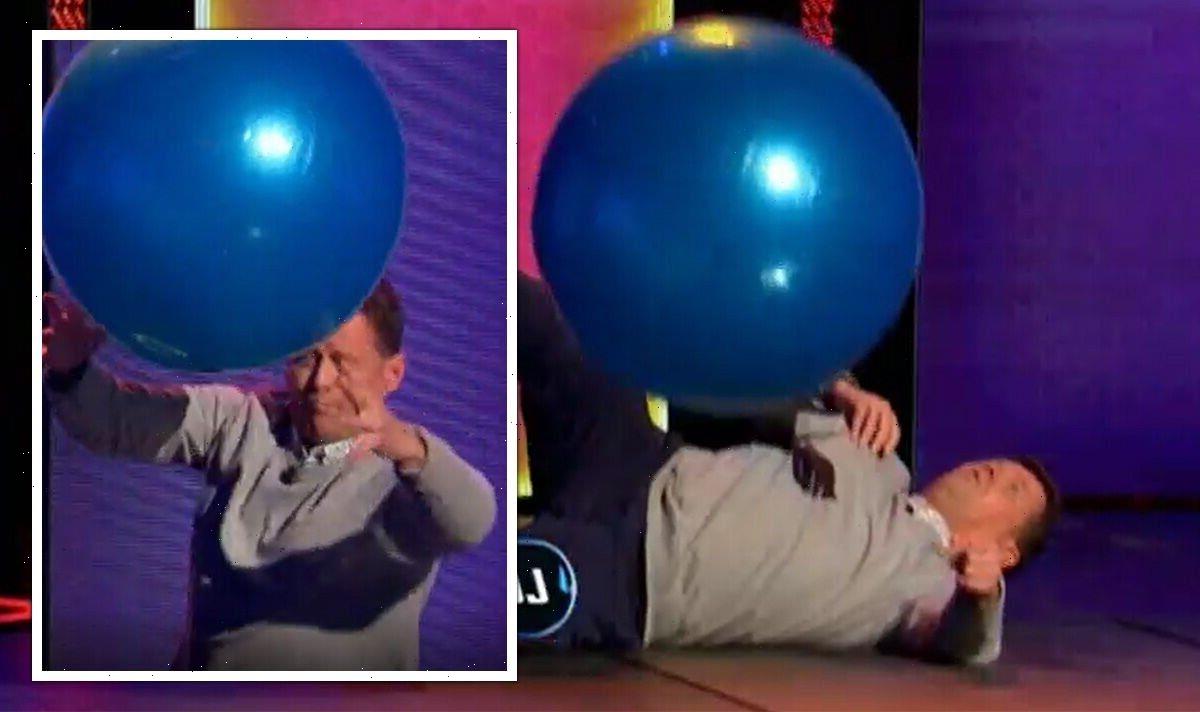 Celebrity Catchpoint: Mike Bushell falls over when ball hits him

BBC Breakfast presenters Mike Bushell and Louise Minchin joined forces on Saturday night to win a sum of money for charity on the BBC game show Celebrity Catchpoint. Whilst competing in the game, Mike was hit in the face by a giant oncoming ball and was knocked down due to the impact.

Competing Against Mike and Louise were Homes Under the Hammer presenters Lucy Alexander and Martin Roberts.

During their first round, Louise managed to bag £100 after guessing that Mick Jagger had the most children out of a celebrity line-up.

Their second question was a game of memory, as they were shown 10 coloured panels which played the tune to Billie Eilish, Bad Guy.

After listening to it once, it was played again however, they had to figure out which colour and note would come next.

After it was played for a second time, Mike was confident he knew where the next note was going to be played and chose the lighter pink panel.

Louise agreed with his decision and pointed out he could move to the left if it was wrong and still be able to win some money.

As the ball came down, Mike had to dive to the left to try and catch the pink ball but was thrown off as a blue ball hit him in the face and rebounded.

This ended with Mike diving onto the floor, exclaiming: “It smacked me in the face!”

Paddy shouted in shock: “Do you know what I honestly think you would have caught that! You were two away, but it was on top of the blue one, good effort, sir.”

Returning to Louise, Mike joked: “From now on, Louise, you are in charge!” however, by the end of the round, they had managed to bank £100.

Throughout the show, Mike was forced to show his athletic abilities as he ended up falling a few more times.

The second fall came after getting a film question incorrect, however, the balls were significantly smaller than in the first round.

Louise and Mike had managed to bank £700, which meant they went through to the final round and had a chance to double their pot.

The last question entailed working out who flew into space in 1966 and 2015, with Mike taking the 1966 position.

As the ball fell from the sky, Mike once again dived for the ball, but it ended up slipping through his arms and left him on his knees.

“I am sorry!” he exclaimed to Louise, as it was up to her to ensure they took the £700 home for their chosen charities.

The position she began with was the wrong answer however, she leapt to the side and managed to catch the golden ball in enough time.

Asking which charities the pair would be sending the money to, Mike revealed: “It is the Sebastian Action trust, which is for young people and children who have lifelong illnesses.”

Louise added: “The Move charity, and it helps people affected by cancer through sport.”

Catchpoint airs Saturday from 7:50pm on BBC One.