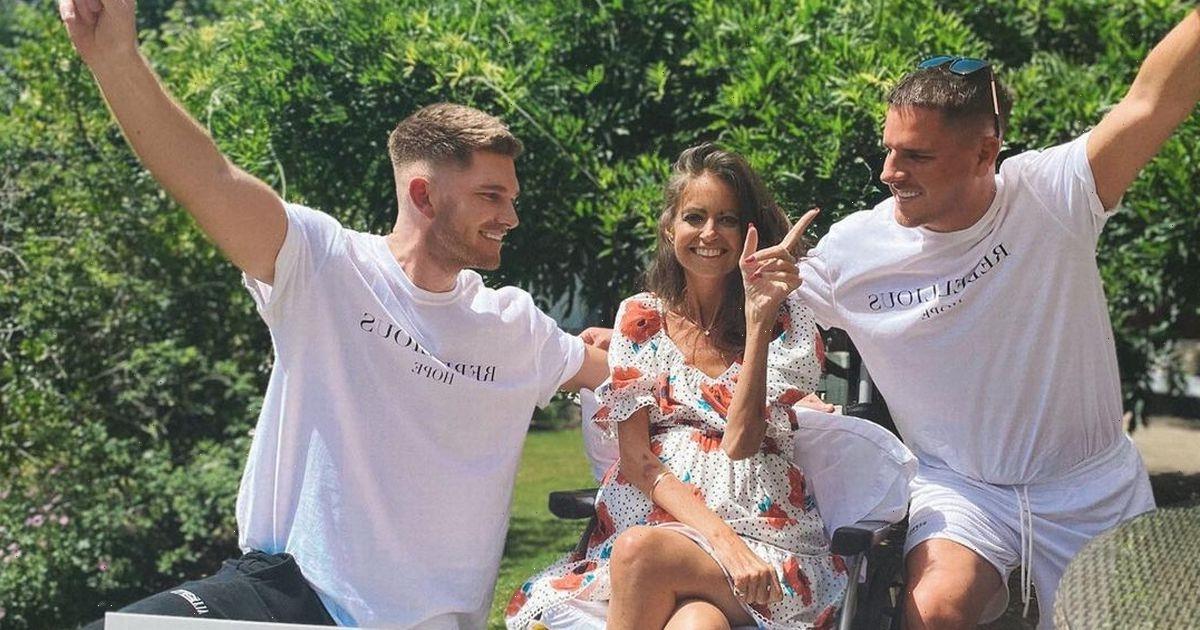 Dame Deborah James has raised £1 million for cancer research through sales of her clothing line with In The Style.

The 40 year old podcaster, known as Bowel Babe online, shared a photo of her with the fashion company’s founder Adam Frisby and his partner Jamie Corbett, alongside a giant cheque.

She wrote on Instagram: “WOW!! ONE MILLION POUNDS. I am honestly so overwhelmed we, through @inthestyle raised over £1,000,000 for @bowelbabefund for @cr_uk! All from sales of the ITS x Dame Deborah James collection and ‘Rebellious Hope’ T-shirts that I designed with @inthestyle. (One million, that’s just crazy).

“I got a lovely little visit yesterday from the @inthestyle founder @fr15by and his partner @thejamiecorbett who brought this lovely cheque and we have had a little toast to celebrate it.

Get exclusive celebrity stories and fabulous photoshoots straight to your inbox with OK!'s daily newsletter .

“I just can’t believe it! What’s funny is when @inthestyle released the first t-shirt we both said how incredible £50k raised would be so for me to still be here and see it’s over £1mil is just so incredible!

“Rebellious Hope is what has got me through the last few years and it’s what is keeping me going now! Seeing all your messages, tags and support has just been the best and I am so grateful that we have been able to do this together! Thank you all.”

The journalist became a prominent figure while highlighting her struggles since being diagnosed with incurable bowel cancer in 2016, going on to host You, Me and the Big C podcast on BBC Radio 5.

She has been a vocal campaigner for cancer charities, as well as doing her best to spread awareness about the disease – especially bowel cancer.

Earlier this week, the Dame made her final TV appearance after being discharged from hospital last month – with doctors giving her just days to live.

She had recorded the TV appearance on Embarrassing Bodies before this update, but did not expect to the episode broadcast due to the doctors' warning.

On the show, Deborah spoke candidly about her cancer diagnosis, the disease she has had to live with for the past five years, and told GP Tosin Ajayi-Sotubo it was the "last thing she expected" aged just 35 at the time.

She said, at the time, she thought bowel cancer was an "old man's disease", and wants to dispel that idea. She also wanted to help others who feel they are in a similar position and inspire people to seek advice.

On the show, Deborah said: "I started going to poo – we need to say that – eight times a day. And I used to be a once-a-day kind of girl.

"Then I started getting really tired and I remember drinking loads of cups of coffee just to try and keep myself awake.

"Then I started losing loads of weight and I started having blood in my poo."

Talking with GP Dr Tosin, Deborah said this was the moment she had a "gut instinct that something wasn't right" and needed to get it checked out.

Deborah is receiving end-of-life care at her parents' home in Woking and has so far defied doctors' expectations – inspiring the nation with her will to make the most of her final days.

For all the latest on TV and Showbiz news, sign up to OK!'s newsletter.