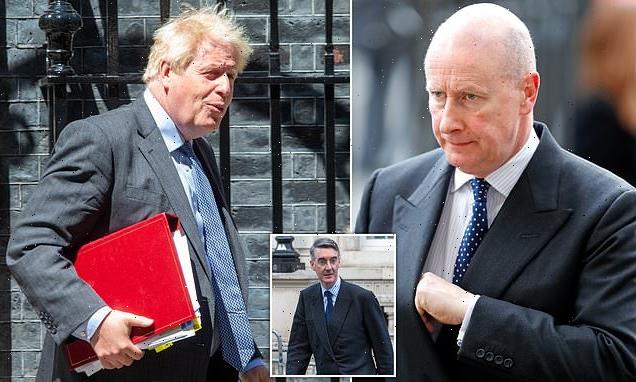 Boris Johnson has been hailed by his Cabinet allies for ‘backing British industry’ despite a row over steel tariffs forcing the resignation of the Prime Minister’s ethics adviser.

After weeks of speculation about his future following the Partygate scandal, Lord Geidt quit on Wednesday night as the Independent Adviser on Ministers’ Interests.

The peer, a former aide to the Queen, revealed he had been being pushed close to the edge by Covid rule-breaking in Downing Street.

But he claimed he had finally been driven to resign after being placed in ‘an impossible and odious position’.

This was when he was asked to consider measures that represented a ‘deliberate and purposeful breach’ of ministerial rules by potentially breaking World Trade Organisation rules over Chinese steel tariffs.

Lord Geidt is the second ethics adviser to resign under Mr Johnson’s premiership, with critics rounding on the PM over the latest departure.

They warned not appointing a successor would be a ‘big mistake’ that would leave ‘quite damaging questions dangling’.

But Cabinet loyalists defended the PM over Lord Geidt’s resignation and insisted Mr Johnson had been ‘acting within the law to defend an essential British industry’. 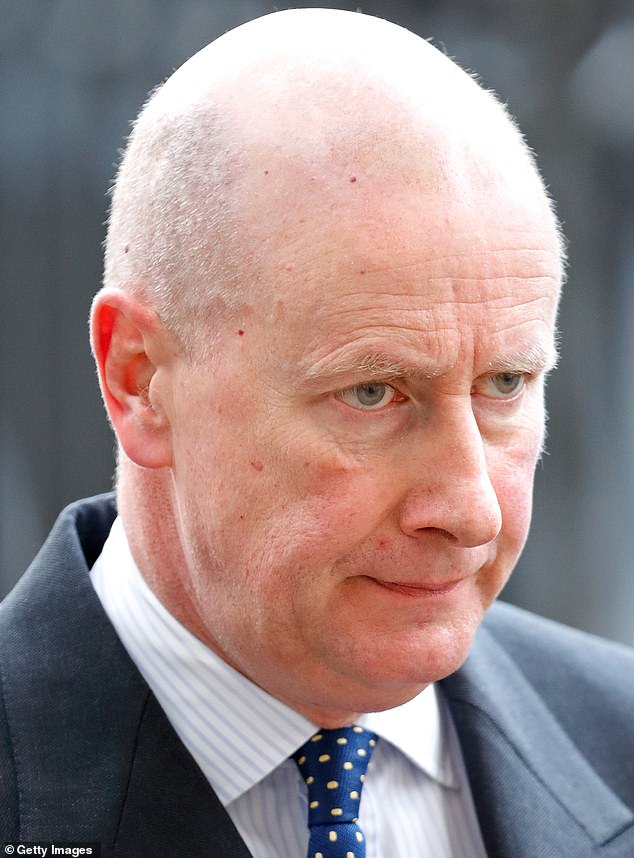 After weeks of speculation about his future following the Partygate scandal, Lord Geidt quit on Wednesday night as the Independent Adviser on Ministers’ Interests 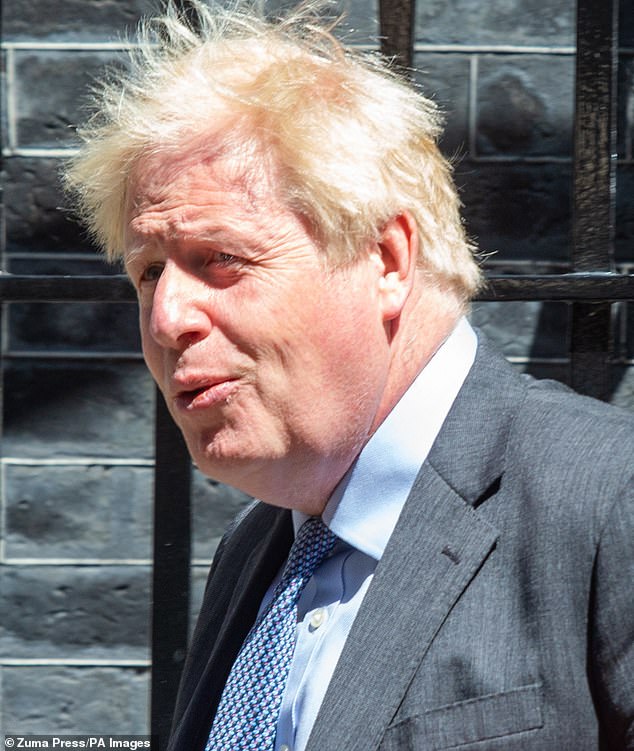 Lord Geidt is the second ethics adviser to resign under Boris Johnson’s premiership, with critics rounding on the PM over the latest departure 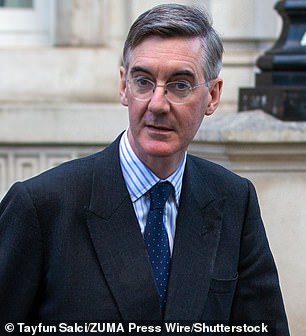 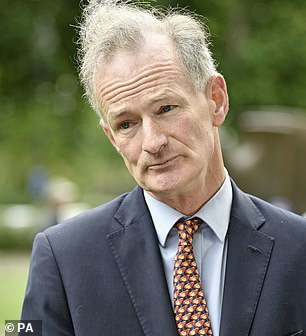 Cabinet ally Jacob Rees-Mogg hailed the PM for ‘backing British industry’. But Tory rebel John Penrose (right) warned it would be a ‘big mistake’ not to replace Lord Geidt

The Trade Remedies Authority recommended last year that tariffs on Chinese steel be removed because there was no legal justification for them.

The Government overruled the advice and extended the tariffs for a year – but they are due to expire at the end of this month.

Brexit Opportunities minister Jacob Rees-Mogg stressed the PM was ‘backing British industry and he’s right to be doing so’.

‘I think everyone in this country wants to make that sure we have a competitive steel industry, which is not subject to dumping from other countries,’ he told BBC Newsnight.

‘There is a question as to whether the Trade Remedies Authority has to be followed or not. That is one where Parliament has decided in the past that it doesn’t have to.

‘So I think the Prime Minister is acting within the law to defend an essential British industry. Now who could be opposed to that?’

However, Mr Johnson was issued with a warning by Tory critics that he would be committing a ‘big mistake’ if he did not replace Lord Geidt.

It came after Downing Street said the PM would ‘carefully consider’ whether he would appoint a like-for-like replacement and raised the prospect of the role being abolished.

The PM is yet to make ‘a final decision on how best to carry out that function, whether it relates to a specific individual or not’, Number 10 said.

Conservative former minister John Penrose, who quit as the PM’s anti-corruption tsar earlier this month and called on Mr Johnson to go over Partygate, warned against a failure to replace Lord Geidt.

‘I think that would be potentially quite a big mistake,’ he told BBC Radio 4’s Today programme. 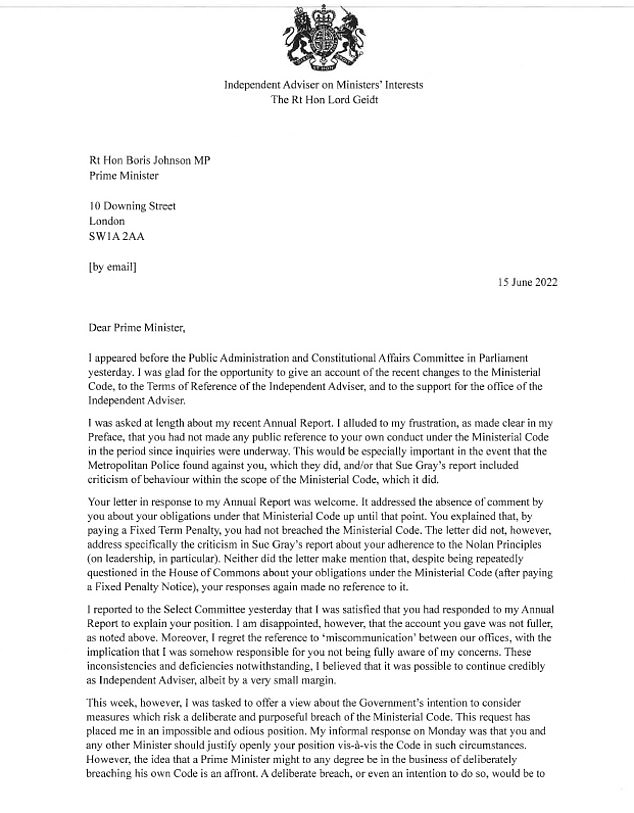 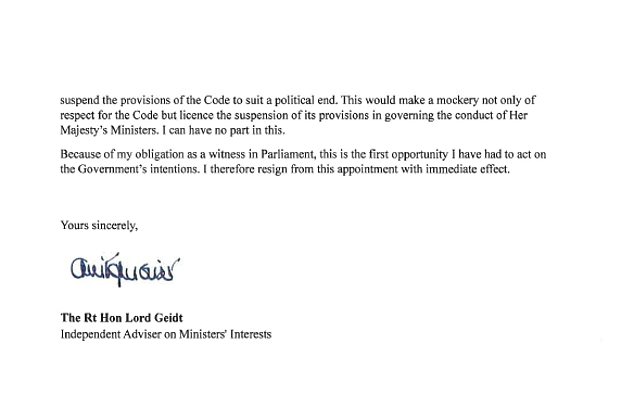 Lord Geidt’s departure as the PM’s ethics adviser came little more than a year after he had been appointed to replace Sir Alex Allan in the role, who resigned after the PM’s overruled his finding that Home Secretary Priti Patel had bullied staff.

Sir Alex suggested that Lord Geidt’s departure over the steel tariffs row ‘was the final straw’ following his successor’s concerns about the PM’s response to being fined by police for breaking Covid rules.

He told BBC Newscast: ‘I think this was the final straw coming on top of, for example, his concerns about the fact the Prime Minister hadn’t said anything about the Ministerial Code in all of his explanations of the partygate saga.’

Both Labour and the Liberal Democrats have reacted with fury to the suggestion that Mr Johnson might not replace Lord Geidt.

It comes ahead of a third Partygate investigation into whether Mr Johnson deliberately misled MPs over his past claims that Covid rules were followed at all times in Downing Street.

‘It appears he will now try to keep it that way, content to further debase standards in public life and demean his office.’

Lib Dem leader Sir Ed Davey said: ‘Only a lying lawbreaker of a Prime Minister could think they could get away with not appointing an ethics adviser to hold his Government to account.

‘Boris Johnson should not only appoint a new adviser but also give Parliament a say on who it is so he can’t appoint a crony to help let him off the hook.’