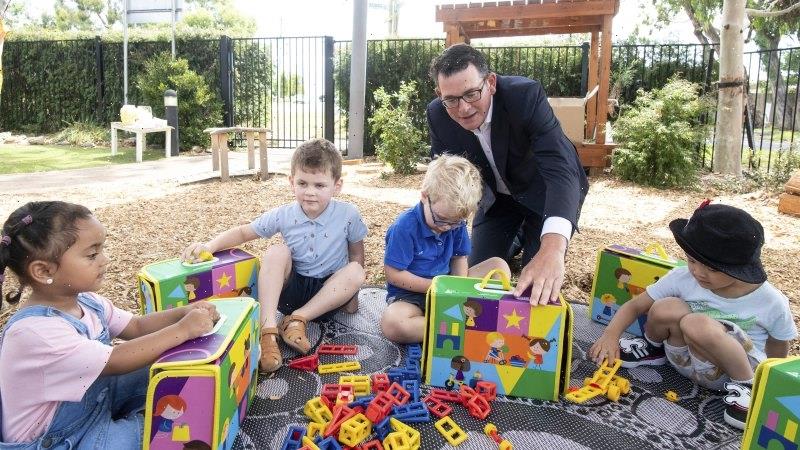 Parents will save thousands of dollars on childcare and kindergarten programs for four-year-olds will be expanded as part of a multibillion-dollar reshaping of preschool learning by the Andrews government.

In a $9 billion package over the next decade, four-year-old kinder will be recast as “pre-prep”, with every Victorian four-year-old entitled to a free, 30-hour-a-week program, up from the current 15 hours. 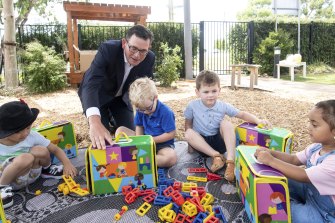 Premier Daniel Andrews said the preschool reforms would also benefit women, who often bear the brunt of a lack of access to childcare.Credit:Penny Stephens

And in a major pitch to families in an election year, the government will also promise subsidies of up to $2500 for children in three- or four-year-old kinder from 2023 and offer 5000 new, lower-cost childcare places at 50 new state-run centres, with the first to open in 2025.

“These massive reforms are about setting our kids up for the future and investing in women – who for far too long have had to do far too much,” Premier Daniel Andrews said.

“These are big changes, but they just make sense – giving our kids the very best start in life and
delivering early education and care that actually works for families.”

Much of the radical overhaul will be mirrored in NSW, with Andrews and his counterpart, Dominic Perrottet, describing the intervention as the “greatest transformation of early education in a generation”.

As a sign of co-operation between the two biggest states – which both have elections within the next 12 months – Andrews and Perrottet co-authored a letter of intent that called the transformation to early childhood education “a long-term policy commitment that will change lives”.

The new childcare centres will deliver childcare, kinder and pre-prep programs and will be built in suburbs with long waiting lists for childcare spots, boosting the overall supply by between 3 and 5 per cent.

Childcare experts hope the new centres will improve so-called childcare deserts, where there are more than three times as many children as childcare places within a 20-minute drive of the family home.

A recent study by the Mitchell Institute for Education and Health Policy at Victoria University found that more than one-third of the Australian population lives in areas with a shortage of childcare places.

Researchers identified the suburbs of Sunshine, Werribee and Rockbank in Melbourne’s west, Cranbourne to the south, and Craigieburn in the north, as having some of the lowest access to childcare.

The study found that childcare services were harder to find further away from metropolitan areas, with more than 44 per cent of regional Australians living in childcare deserts.

At the time the report was released, lead author Dr Peter Hurley said there was a huge body of evidence that showed high-quality early learning sets children up for life.

“Children from disadvantaged backgrounds benefit the most, but our research shows these children are the ones most likely to live in an area with a shortage of childcare places.”

According to the Mitchell Institute, the average out-of-pocket fees for the first child in childcare, using an average of 30 hours a week, are about $5000 a year, more than the average fees for a private primary school.

Victoria’s funding boost will not impact eligibility for Commonwealth support, with the federal government planning to increase the maximum subsidy rate by up to 90 per cent for the first child in care.

The Albanese government’s $5.4 billion-a-year childcare plan – which will see households with a combined annual income of up to $530,000 offered bigger subsidies – was due to start in 2023. However, Early Childhood Education Minister Anne Aly has hinted that the policy could be fast-tracked to help address cost-of-living concerns.

The policy collaboration between Victoria and NSW comes just days after Andrews and Perrottet teamed up to call on the federal government to overhaul health funding and end the long-running state and federal divide.

With about 90 per cent of brain development occurring in the first five years of life, Victorian Minister for Early Childhood Ingrid Stitt said the policy overhaul would ensure the youngest Victorians get the best start.

“We know families are struggling with the cost of living and free kinder will help make sure no child
misses out on those vital early years,” she said.