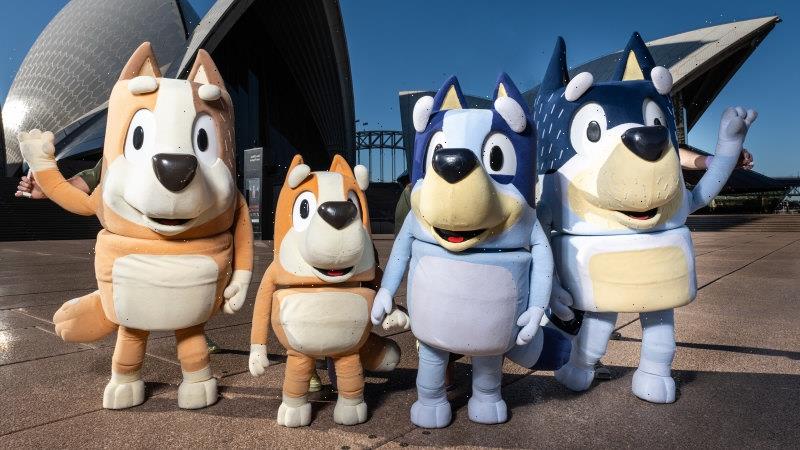 Australia has long punched above its weight in children’s entertainment – think Skippy, Hi-5, The Wiggles – but in terms of global reach and range, nothing comes close to Bluey, the animated series created by Joe Brumm and made by Brisbane-based Ludo.

Since its launch in late 2018, the adventures of a family of blue heelers have been spun off into books, albums, clothing, toys – even a live stage show. The show is now seen in more than 60 countries, including China, there are 110 merchandising licensees internationally, and more than 1000 Bluey-themed products are in the marketplace. Put simply, Bluey is an off-the-leash runaway smash – and, its rights holders hope, one with a very long tail indeed. 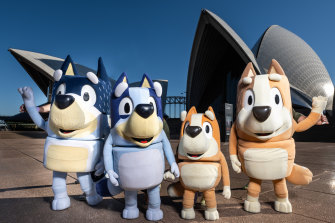 Bluey’s Big Play is set for a major tour of North America.

“When we think of things that are Australian that have gone around the world, there’s no comparison,” says Fiona Lang, general manager of BBC Worldwide for Australia and New Zealand. “It’s different from anything we’ve experienced before.”

It is Lang’s job to maximise the reach of the lovable cattle dog, her sister Bingo and her parents, dad Bandit and mum Chilli. Though most Australians think of Bluey as an ABC property – it is regularly among the broadcaster’s most-watched programs, largely thanks to iview – the marketing and ancillary rights to the series are owned by BBC Worldwide (though to complicate things further, some global broadcast rights belong to Disney).

With a variety of international players circling from almost the moment Bluey emerged blinking into the world, Ludo opted to go with the commercial arm of Britain’s national broadcaster because of its global reach and its vast experience making fortunes from the likes of Doctor Who, Top Gear and Charlie and Lola. And thanks to that partnership, the Bluey name and characters can now be seen on everything from pyjamas to pushbikes, toothpaste to toys, books to biscuits.

Locally, more than 6.8 million Bluey-themed clothing items have been sold through K-Mart and Target alone. Bluey is big not just in Australia, but also in the UK, the US, Canada and New Zealand, with Asian markets now coming online too. The show – whose latest episodes began screening on ABC TV this week – has fans in Spanish, Italian, Portuguese, French and Scandinavian markets. And where it has fans, merch follows.

Typically, says Lang, “a brand like this builds, there’s a well-developed course over five years”. But with Bluey, which first screened on the ABC in October 2018, “those usual rules about how you go about licensing have been thrown to the wind”. 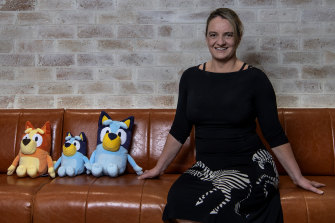 Fiona Lang and some of the more than 1000 items of Bluey merchandise now available. Credit:Louise Kennerley

The first products were books, commissioned by Penguin Random House in April 2019 and in store by November. Second was a toy deal with Moose, which also had a range of plush characters in store by November. Both topped the sales charts that Christmas. By January 2020, there was a clothing deal with Bonds. In May Peter Alexander followed, and on it rolled.

Less than 12 months after the series launched, Bluey had entered the cut-throat but lucrative world of fast-moving consumer goods, with a Paul’s yoghurt product in Australian supermarkets. “That’s something, according to the bible of licensing, that you’re not supposed to do until year three or four, but we were right there,” says Lang.

Bluey product hit the US in 2020, the UK, Canada, Mexico and Denmark in 2021, and many more territories – including in south-east Asia – will come online this year and next. There’s been a promotion with Airbnb in which one lucky family could stay in an exact replica of the Heeler House. Just around the corner is a 65-date North American tour of the stage show Bluey’s Big Play, which kicks off in November with seven shows in three days at the 5600-seat Hulu Theatre at Madison Square Garden in New York.

Surely this all means peak Bluey is upon us? “Oh God no, nowhere near it,” says Lang. “We’re absolutely in build stage, and I think that will continue for many years to come.” 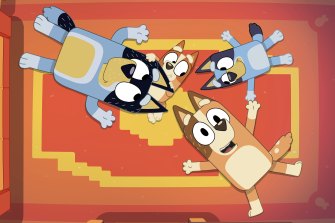 A scene from the ‘Musical Statues’ episode of Bluey season 3.Credit:ABC

The show’s Australian humour and gentle family dynamics are key to its appeal, but Lang concedes COVID played an unanticipated part in its rapid growth too. “The family was coming together as co-viewing took off,” she says. “There were so many eyeballs on Bluey, people were organically discovering it, talking about it, asking ‘Oh my goodness, can I be as good a dad as Bandit?’”

She’s referring to the show’s father, voiced by David McCormack, former frontman of Brisbane indie rockers Custard, who has been hailed as a role model and was voted Father of the Year in 2019 by deaf advocacy group The Shepherd Centre. (Recently, however, a pair of Queensland academics called this assessment into doubt in a piece that argued Bandit is no more than a traditional Aussie larrikin given to bouts of cheating, bullying and conservatism.)

Whatever the reason for its success, brands just can’t get enough of Bluey. “It is no stretch to say that in a month we’d have hundreds of approaches,” says Lang, adding that most of them don’t make the cut because they’re not deemed to be the right fit. “You’ve got a responsibility when you’re commercialising a brand like this to make sure every touchpoint and experience that the children and the parents and the grandparents are having is reinforcing the Bluey values.”

That might sound a little like Lang’s just stepped out of a Khmer Bluey re-education camp, she concedes, but it’s all part of ensuring the show (and its merch) is more than a flash in the pan.

“For every licensee that’s right, we need to put that hat on to say what is not right, so we don’t flood the market, so we keep Bluey where Bluey should be.”

She looks to Winnie the Pooh and Paddington Bear – neither, incidentally, a BBC property – as examples of what sort of long-term life Bluey could have, if managed well. “I really think, hand on heart, this is going to be an evergreen that just goes on and on.”