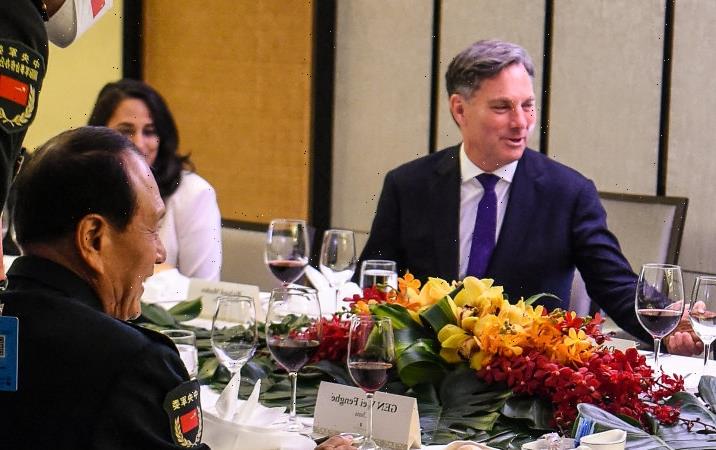 Singapore: Almost three years of diplomatic division between Australia and China, $20 billion in trade strikes, and threats of retaliation came to a head over dinner in Singapore.

In a room of 500 people at the Shangri La hotel on Friday, Australia’s Defence Minister Richard Marles and China’s Defence Minister Wei Fenghe found themselves sitting opposite each other. Next to Marles on table one at the glitzy ballroom was US Secretary of Defence Lloyd Austin. It was not a coincidence. 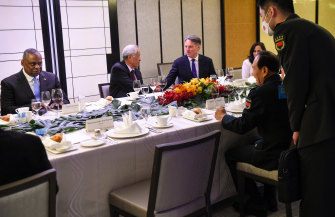 A meeting that did not take place under three Australian prime ministers, took only minutes to formulate over a dinner on Friday. (Incidentally, Australian white wine was on the menu.)

By Saturday, the wheels were in motion – crucially on the proviso that there would be no conditions attached to the meeting or immediate expectations from either side.

On Sunday, Wei and Marles met, this time for an hour in a private space where they could be honest about the deep political, diplomatic and defence differences between the two countries.

Neither side wanted to be the first to formally request to reopen ministerial dialogue. More than 30 months of bitter dispute over foreign interference, national security, hostage diplomacy, human rights, trade sanctions and COVID-19 had made both sides stubborn. But sitting opposite each other – in a neutral venue – made the conditions right for the two defence ministers to come to terms without losing face.

“We agreed it was important that our two countries meet,” Marles said on Sunday.

Australia’s list of disputes with China is long and well established, so too are Beijing’s 14 grievances with Canberra, but the logistical limitations of two years of pandemic diplomacy have made a bad situation worse. Attempts at remote contact have been bogged down in a bureaucratic maze, technical problems and an atmosphere of distrust. China blocked Australia’s phone calls, Australia angered China’s embassy in Canberra. Xi Jinping has largely kept its emissaries – except for Wei and Foreign Minister Wang Yi at home.

Until Friday, there had been no opportunity for Australian and Chinese ministers to informally meet simply by being in the same room. Zoom diplomacy is no replacement for the real thing.

Marles described it as a “full and frank discussion” that spanned China’s intercept of an Australian air force plane in May, Beijing’s plans for the Pacific and the trading relationship between the two countries.

The dialogue is a positive step but the path back to normalcy remains treacherous. At least two Australians, Yang Hengjun and Cheng Lei remain locked up in Chinese jails on trumped-up charges relating to national security. Australian wine, seafood, barley and beef exporters remain largely shut out from their largest market. And China remains impervious to criticism of its human rights record in Hong Kong and Xinjiang, where political oppression is entrenched under the guise of “internal affairs”.

Australia is also grappling with its own foreign investment rules that appeared aimed at stopping a Chinese takeover Lion Dairy, its prolific use of anti-dumping measures and a looming review of the lease of the Port of Darwin on national security grounds. None of these will be easy to navigate.

But at least a channel has now been opened.

Any optimism should also be tempered by the status of Wei in the overall political structure in Beijing. Wei is a minister in the State Council – responsible for the Defence Ministry’s public affairs – but he is outranked by the two vice chairmen of the Central Military Commission. He is not on the Politburo Standing Committee, China’s high-powered cabinet, nor does he control the defence department like Marles, who is also Australia’s deputy prime minister. Wei is not in the inner circle, but nor could his meeting with Marles have been signed off without the highest level of approval from Beijing.

On Saturday, Wei delivered a speech that did not cede any ground on the future of Taiwan and accused the US of fuelling the war in Ukraine, while offering up an idyllic vision of peace, respect and non-interference for all countries around the world.

At the same time, China is militarising islands in the South China Sea, establishing the power of force over its infrastructure assets in Solomon Islands and making what Wei described as “good progress” on its nuclear weapons program.

Bloomberg reported on Monday that Chinese military officials have in recent months repeatedly asserted during meetings with their US counterparts that the Taiwan Strait is not in international waters. It is an ominous portent that escalates the potential for intentional or accidental conflict in one of the world’s most contested spaces and now gives China the cover it needs to claim it warned America and its allies.

China’s deeds clearly matter more than the words. For Australia, that means Marles and Albanese will continue to focus on relief from trade sanctions as one of the few tangible measures that could signal a new direction for Canberra and Beijing.

The measures will need to be lifted if the relationship is to heal beyond the symbolic but empty gestures of its ministers.