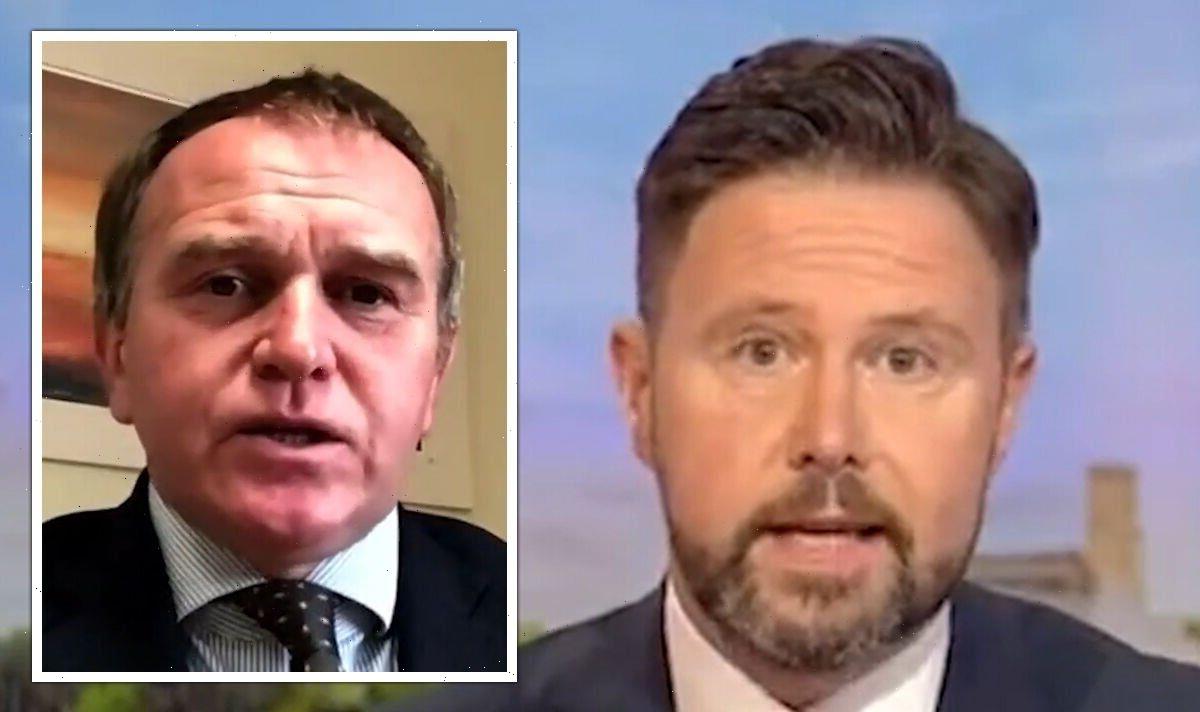 George Eustice says Brexit ‘not a factor’ in shrinking GDP

BBC Breakfast presenter Jon Kay spoke with the Environment Secretary regarding the cost of living crisis and the government’s plans going forward. The presenter asked Eustice what he thought of the recent report from the OECD (Organisation for Economic Co-operation and Development) as well as the new figures the UK economy had fallen by 0.3 percent. When probed whether he thought Brexit played a role in the economic decline, Eustice shut down Kay and admitted that he didn’t “accept” Brexit as a viable reason.

Kay began the discussion and asked: “The OECD looks at countries around the world, doesn’t it and it said over the weekend that it predicts the UK’s economy to be the slowest growing of all the major economies next year.

“Why are we going to be hit so much harder, it seems, than others?”

Eustice responded: “Well, I haven’t seen that OECD report, but different countries are affected in different ways at different times.

“We actually have a stronger economy than most of the rest of the world and strongest in the G7 as we came out of the pandemic.

“We then had that growth, and they have now probably got to the stage where they are coming over the pandemic slower, so their economy is showing a higher growth.

“But the world economy at large is going to be affected by these headwinds that we have with inflationary pressure.”

“I don’t accept that Brexit is a factor in this,” Eustice exclaimed. “Because we are seeing trade continue and actually the big problems that businesses are facing are principle are some labour shortages and some inflation.

“That is happening right across Europe, and it is happening in the US as well, globally economies are finding there is a shortage of labour.

“It is mainly that price of gas and oil, those energy costs that are eating into our margins and affecting people’s investment decisions.”

Kay and co-host Sally Nugent previously spoke to Henry Dimbleby, lead for the National Food Strategy review in the show, where he hoped the government would be bold with their plans to help the food shortage.

He told them: “I am hoping that the Health Secretary will be bold and brave and a different political context and act to break that junk food cycle.

“I hope we get away from this narrative of personal responsibility and education, which is important, but it isn’t going to get us out of the hole we are in.”

Eustice touched on what Dimbleby had to say and hit back at the criticism the Health and Environment Secretaries had received.

“I don’t accept it, I have spoken to Henry Dimbleby over the weekend, and actually, he welcomes the vast majority of this, not least because it is what he proposed.

“So he made a lot of recommendations around the issue of obesity and also some issues around net-zero as well, we are addressing all of those issues through our farming policy.

“We have got point of sale restrictions in place in supermarkets coming into effect this year, and this is already driving reformulation in the industry, so much of that has been done.”

Kay hit back and exclaimed: “Not really, most of the things he talked about salt and sugar in our diet, the health aspect of his report, he said, ‘All that has been kicked down the road by the government’.”

Eustice snapped: “Well, that is not true actually, what has happened is we have introduced point of sale restrictions for foods that are high in salt, fat or sugar.

“Supermarkets are already changing their supply chains and reformulating to get healthier food, and we have already introduced measures to deal with those.”

BBC Breakfast airs everyday from 6am on BBC One.