Border security officials failed to thoroughly search the mobile phone of one of Australia’s most notorious paedophiles at Melbourne Airport in 2015 despite being warned the 64-year-old was a suspected child sex offender travelling overseas with a minor.

The victim, Tiffany Skeggs, has now told The Age, The Sydney Morning Herald and 60 Minutes that at the time, both her phone and that of offender James Griffin contained “extremely exploitative and pornographic material of myself [aged 15] for certain”. 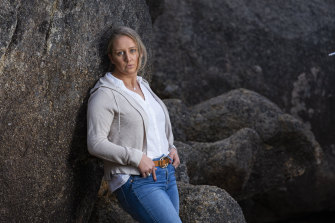 Tiffany Skeggs was abused between the ages of 11 and 19.Credit:Ross Swanborough

Griffin was a pediatric nurse who was employed at several Tasmanian government institutions who may have abused or groomed up to 30 children. Tasmanian police have already faced searing public scrutiny for their failures to act on multiple tip-offs over many years about Griffin. He killed himself before any of his victims could see him face justice.

After the failed search in 2015 the pair, who were returning from Turkey, went back to Tasmania. Skeggs was 17 at the time of the trip, and her abuse at Griffin’s hands did not stop until she was 19. Until now the details of his interaction with the Australian Border Force have remained clouded by agency secrecy.

Skeggs says the failure to adequately search the notorious offender at the airport may have also enabled Griffin to seek and find other victims. She has now publicly shared her battle to uncover why multiple agencies missed opportunities to stop his offending until he was finally charged in 2019 after Skeggs gave Tasmanian detectives a statement.

Skeggs says Griffin had near complete control over her between 2008, when she was 11 years old, and 2017, and that he was raping her several times a week. Griffin groomed Skeggs as a child netballer. He was a volunteer at Netball Tasmania.

An ongoing commission of inquiry into child sex abuse in Tasmania was ordered last year by the state government in connection to the Griffin scandal, as well as allegations of abuse in the Ashley Youth Detention Centre. However, the inquiry does not have jurisdiction to look at the action or inaction of federal agencies.

Skeggs said the ABF missed damning and easily retrieved evidence in May 2015 when border security officials at Melbourne International Airport approached the pair and demanded to search some of Griffin’s possessions. ABF were acting on a federal police international passenger alert that Griffin was a suspected child sex offender travelling overseas with an unnamed child.

Skeggs says there was video evidence on her mobile phone, and the phone of Griffin, of the pediatric nurse raping her as a 15 year old while he was about 64 and in a position of authority.

Skeggs said that if ABF had conducted a forensic search on one or both of the phones, they would have discovered “a particular set of images and videos that were of he and I in his bedroom, in his bed. And the video is a recording of him penetrating me and sexually assaulting me aged 15.” 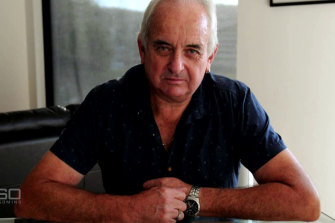 Skeggs said the failure of ABF to conduct a more thorough search meant “that I still had years of abuse to come”.

“I would never have another opportunity like that for any authority in this state or this country to help me. I was on my own. I had to fend for myself and continued to be raped by him, as did others.”

Seven years after the Australian Customs and Border Protection Service temporarily seized Griffin’s phone at Melbourne Airport’s international terminal, the agency is not willing to respond to specific questions. In a brief statement, the ABF said a thorough internal review has shown it “took the appropriate action in compliance with our legislative obligations”.

Skeggs also revealed she had been involved late last year in confidential briefings, where she took detailed notes, with a senior Border Force officer who had told her that a possible technology failure was the reason why no electronic forensic phone search or download was conducted.

Skeggs insists ABF took possession of both her phone and that belonging to Griffin, although ABF records from the evening only record Griffin’s phone being taken and then manually searched.

This masthead has confirmed that ABF did not conduct a forensic search on either phone, a process which involves a computer scanning photo thumbnails to detect indicators of pornography, such as a high proportion of skin tone.

The ABF did not respond to a list of specific questions, including why a forensic search was not conducted or whether it disputed Skeggs’ clear recollection that her phone was seized in addition to that of Griffin.

One possible explanation for the failure to conduct a more thorough search is that the ABF believed it was under federal police direction not to alert Griffin that he was the subject of law enforcement interest, rather than the subject of a random border phone seizure. However, Skeggs dismisses this, noting that the moment ABF approached the pair at the airport, Griffin panicked, fearing he was an abuse suspect.

Skeggs said this belief increased as the pair had to wait at least 1½ hours at the airport while ABF conducted its search. 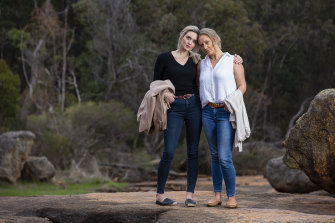 Skeggs with Alysha, a former guard from the Ashley Youth Detention Centre, who have joined forces to expose issues in Tasmania’s institutions. Credit:Ross Swanborough

“After they handed back our phones and let us go, he made me delete the images and videos off my phone,” she said.

This masthead also asked the AFP if it had given Border Force express instructions not to conduct a forensic phone search. The ABF conducts searches at airports of passengers listed by the AFP as suspects or potential targets, but is often given limited information about the underlying federal police inquiry.

The AFP said it could not comment while the commission of inquiry is underway.

The AFP also referred its intelligence about child sex abuse, Griffin and his travel overseas with a minor to Tasmanian police at the time of the 2015 trip.

Last year, Tasmania Police apologised to sexual assault victims after revealing the force was also tipped off about Griffin in 2009, 2011 and 2013. Three state police officers were disciplined as a result of an internal police review, which recommended reforms to ensure tip-offs are more thoroughly investigated.

This weekend, this masthead and 60 Minutes also revealed how whistleblowers had exposed the mishandling of abuse allegations at the Ashley youth jail in Tasmania. Griffin worked at Ashley in 2017, despite suspicion he was an abuser. It is unknown if he offended against children in detention in addition to his other Tasmanian child victims.