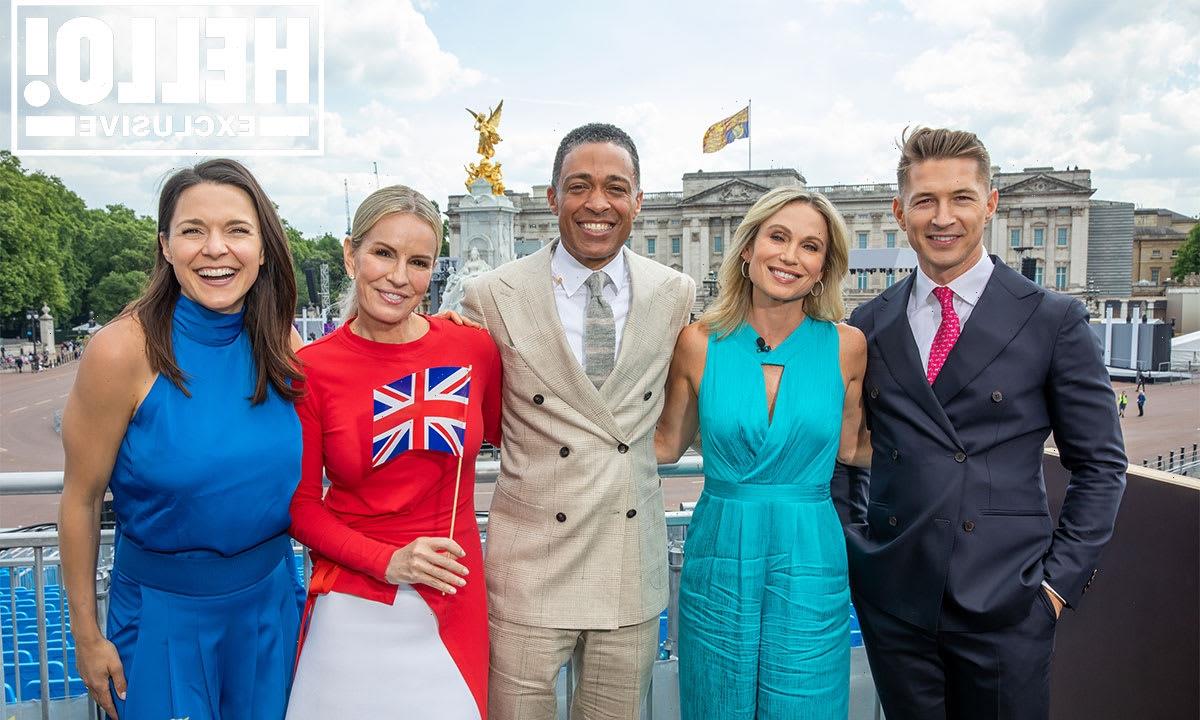 Good Morning America have provided some incredible backstage photos from their time reporting on the Platinum Jubilee in London this weekend.

MORE: Amy Robach looks incredible as she touches down in London

Pictures include GMA3 co-stars Amy Robach, T.J. Holmes enjoying an afternoon tea with their ABC family in front of Tower Bridge, all dressed up for the special occasion.

Other images show Amy and T.J. mid-reporting during the special weekend, and another of the group posing in front of Buckingham Palace, with Dr. Jennifer Ashton holding up a Union Jack flag.

The GMA stars had the most amazing time in the UK’s capital, having spent several days there during the four-day Platinum Jubilee weeekend, and gave an incredible insight into the special occasion on the show each day.

MORE: Amy Robach shares video of terrifying interruption she faced while on a hike

MORE: Amy Robach appears like you’ve never seen her before as she reveals unbelievable transformation

In pictures shared on social media on Saturday, Amy described her time in London as one of the best assignments she has ever done.

Amy Robach and T.J. Holmes had the best time with their ABC family in London

She wrote: “Thumbs up. One of the best assignments ever… peace out London, Orlando here we come to host @specialolympics this Sunday on ABC.”

In another post, the mother-of-two paid tribute to co-star T.J, and wrote: “What an absolute joy and honor to witness the celebrations here in London for Queen Elizabeth II – you can see it in our faces – just incredible to cover the pomp and circumstance, precision, respect and love here all in honor of her majesty’s 70 years on the throne. Couldn’t have asked for a better partner through it all.”

Jennifer also reflected on her time in London with a heartfelt post alongside pictures. She wrote: “That’s a wrap on 2 great days of @abcgma3 for Platinum Jubilee coverage from London. Thanks to our entire amazing NYC and London based crew and team of literally the best in the biz for tv production.

“It is not easy to make television appear so effortless but there are over 100 people working to make that happen. And these two, the anchors that literally never drop the ball, @ajrobach @officialtjholmes … well… no words!

The group posing in front of Buckingham Palace

“Since I was here for just 36 hours, I didn’t get to snap too many pics, but here are a few of my faves from this trip to the UK…Thx to @alyssalapertosa @teresasongkim for keeping this train on the track and @dsmags @vjohnsonmakeup for helping us look camera ready in wind, heat, and royal fly-overs!

“And Hannah Waddingham from #tedlasso for being our guest to wrap our week. #platinumjubilee #london #abcfamily.”