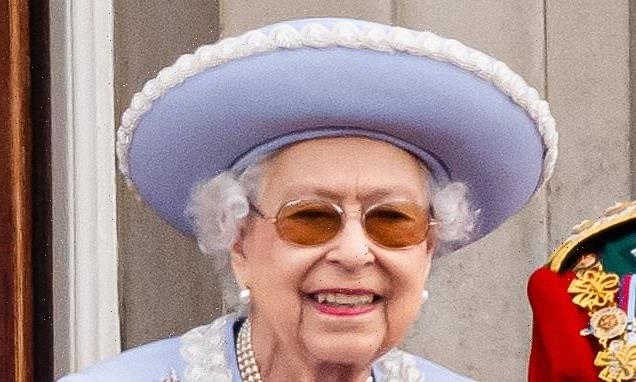 ESTHER KRAKUE: As a Ghanaian Brit, I’m cheering for the Queen who has helped to bind our world together

One of my fondest childhood memories is of cuddling up, aged six, with my grandmother in Ghana to watch Queen Elizabeth II’s Golden Jubilee in 2002.

Thousands of miles away in London, crowds were thronging the streets. The Red Arrows were roaring past Buckingham Palace as the beaming Royal Family waved to the world.

At the heart of it all, of course, was the Queen: a constant presence in the life of her subjects and, indeed, across much of the planet. 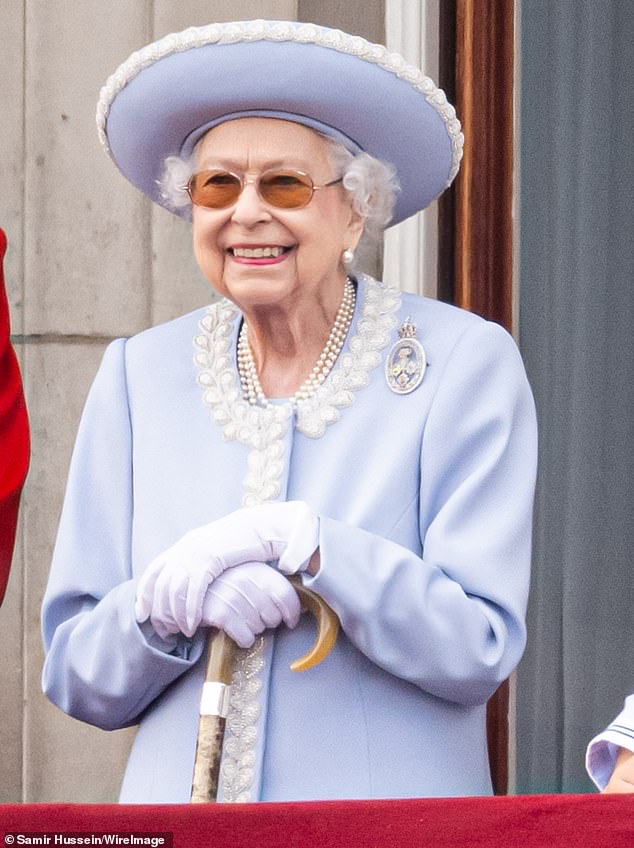 I have been baffled that in the run-up to the Platinum Jubilee, we have heard so little about the pivotal role our Queen has played in binding together the Commonwealth, Esther Krakue says

At the time, I could not have known how profound an effect the Queen would later have on my life and education.

But indirectly, Her Majesty — and especially her greatest legacy, the Commonwealth — have helped shape me, the country in which I grew up and the world at large in deep and vivid ways.

As someone who first came to Britain to attend school as a 14-year-old in 2010, I have been baffled that during the run-up to the Platinum Jubilee, we have heard so little — especially on the BBC — about the pivotal role our Queen has played in binding together the Commonwealth.

It is, quite simply, her greatest achievement. The Commonwealth unites untold numbers of people, reinforcing links between Britain and its former colonies and cementing the UK’s position in a post-colonial world.

As a Ghanaian — and now also a British citizen — I have seen for myself how this grouping of nations safeguards democracy, promotes equality, supports trade and improves education. Without it, the lives of countless people, myself included, would have been immeasurably poorer. 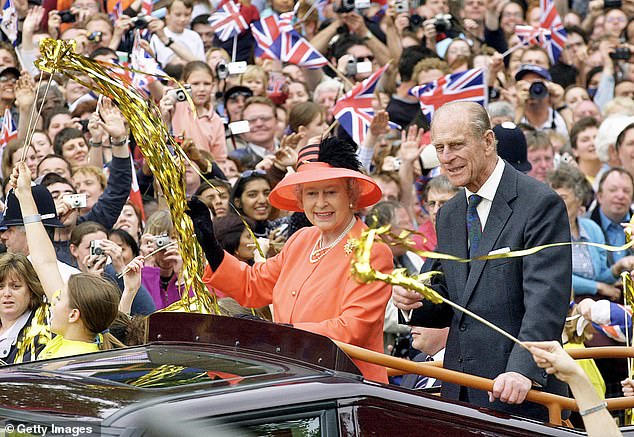 One of my fondest childhood memories is of cuddling up, aged six, with my grandmother in Ghana to watch Queen Elizabeth II’s Golden Jubilee (pictured) in 2002

Even the most sour-faced republican critics of the monarchy must swallow their pride and acknowledge that she has turned the Commonwealth into a phenomenal force for international progress.

Today, 2.6 billion people — one in three across the world — live in Commonwealth countries. And it is only when you grow up in the Commonwealth that you can truly understand how many of its citizens revere the Queen.

Let me be clear: the respect and affection felt for her are not accidental. They are the result of her extraordinary sensitivity and diplomatic skill.

Ghana, for instance, was one of the first African nations to declare independence from the British Empire.

In 1957, the former Crown Colony of the Gold Coast assumed its new name, and just four years later the Queen and Prince Philip arrived on a royal tour.

The visit was a risky enterprise. Ghana’s first president, Kwame Nkrumah, was a hardline socialist with pro-Soviet leanings.

Against a backdrop of bombings and anti-British rhetoric in the capital, Accra, royal advisers warned the monarch to call off her trip.

She refused to be intimidated. The Queen believed that pulling out would show ‘a lack of moral fibre’. 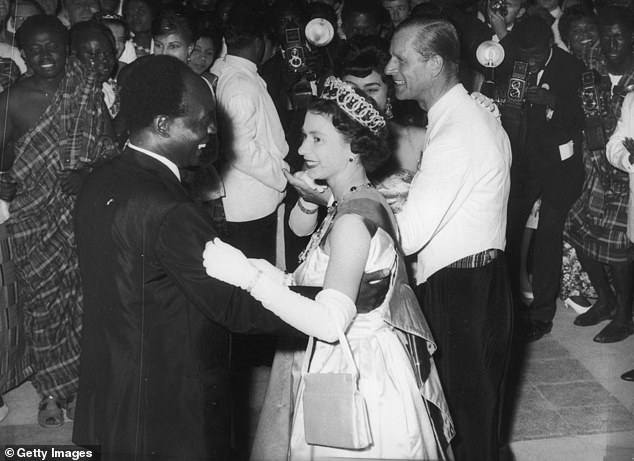 In 1957, Ghana declared independence from the British Empire, and four years later the Queen (pictured with president Kwame Nkrumah) arrived on a royal tour. It was a risky enterprise

The visit was a phenomenal success, capped by the Queen dancing the foxtrot with Nkrumah at a state banquet.

Photographs from the night show her looking happy and radiant — but note the joy on the president’s face, too. There is a man having the time of his life.

When the Queen’s plane touched down in Ghana, Nkrumah was prepared to lead his country out of the Commonwealth altogether. By the time she left, he was pledging his ‘personal regard and affection’ — and he spoke for the nation.

My grandmother, who died in 2018, never lost that affection, and she passed it on to me. Her family came from a rural town on Ghana’s western coast, but when I was a child we lived in Accra as a middle-class urban family.

When I arrived in Britain, I expected a sharp culture shock. But I was stunned to realise how alike our two countries were, and how much culture Britain and Ghana actually shared.

Both English-speaking democracies, they combine a predominantly Christian history with similar values, ideals and attitudes.

Some of this is the legacy of Empire, of course, but there is no doubt, too, that the Commonwealth has helped to tighten these links.

Britain, like Ghana, is a truly welcoming country. That friendliness must never be understated. The Queen represents it to her soul.

When I first came here, I was struck immediately by Britain’s multi-cultural ethos: the Sikh men wearing turbans, African women in gorgeous gold cloth, Orthodox Jewish children holding hands on their way to school, imams in white robes, Irish families (and everybody else) partying on St Patrick’s Day.

That is why it was so disappointing to read Stephen Fry’s recent comments at the Hay-on-Wye book festival, accusing Britain of a vile deep-seated racism. 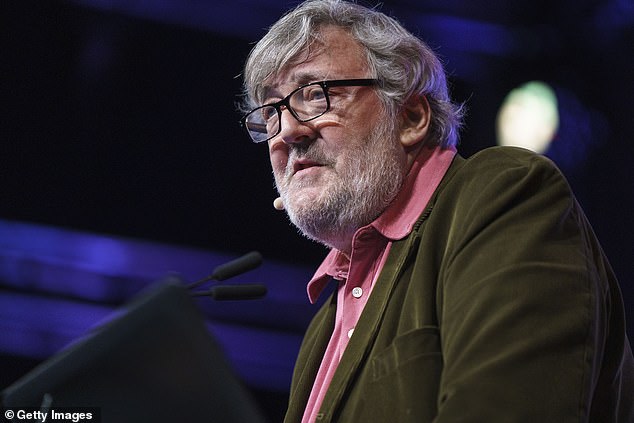 It was disappointing to read Stephen Fry’s comments at the Hay-on-Wye book festival, accusing Britain of a deep-seated racism. He  was trying to burnish his credentials as a liberal

‘British people: we do rather like to think that because we’re politer and nicer than Americans, that we’re a very tolerant nation,’ said the actor.

‘We delude ourselves. It’s like any self-mythologising: we’re not aware of what a white space it is and how unwelcoming it has been for people of colour, especially black people.’

Of course, Fry was simply trying to burnish his credentials as a good liberal. But how ironic that he, a white man, presumes to speak with authority on how ‘unwelcome’ black people supposedly feel in Britain.

Then again, that is how the Left always prove to themselves that they are not racist: by accusing themselves (and everyone else) of racism.

Regardless, such indiscriminate observations only expose Fry’s ignorance. Quite apart from the fact Britain and America have vastly different relationships with race, it is not a ‘delusion’ to recognise that Britain is a tolerant, open society. So is Ghana, by the way: that’s why I feel so at home in both countries.

Our shared values and history make our nations natural allies. In the wake of Brexit, I want to see more trade and more travel between Commonwealth countries. Why should a Polish bricklayer have more right to live in the UK than a Ghanaian doctor?

That made no sense, and shows why Britain was right to leave the EU. The UK has few historic ties to Romania or Hungary — to whose populations our doors were flung open by the EU’s migration rules — but a rich, deep and shared history with Canada, India, Pakistan, Nigeria, Uganda, Ghana, Barbados, Belize and all the other members of that great coalition of 54 independent countries. 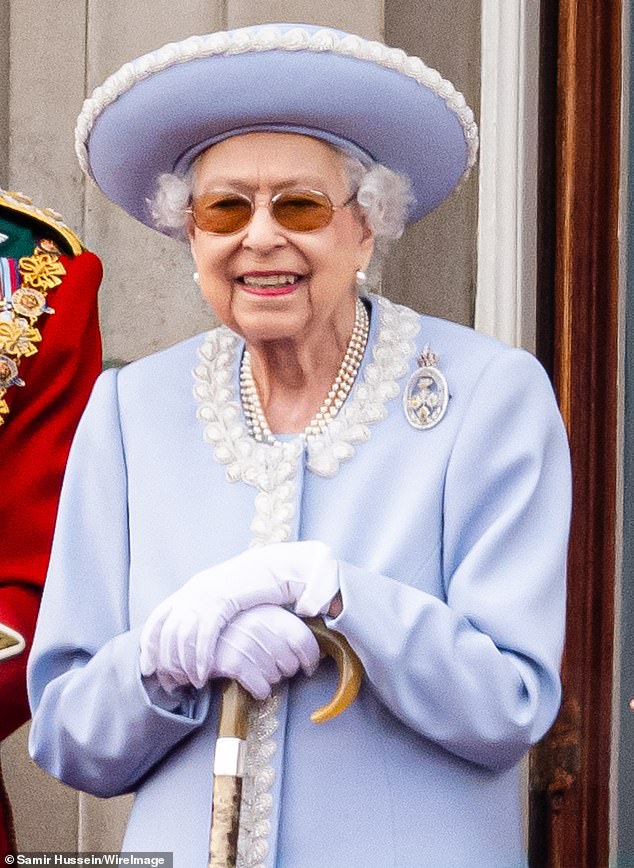 raise a toast to the monarch on her Platinum Jubilee, I will be remembering my grandmother, too — and saying thank you on her behalf, as well as my own, for all it has brought the world

These are the nations that help to cement Britain’s spiritual and cultural identity. Brexit’s critics called our departure from the EU ‘xenophobic’, but forcing the UK to shut its doors to the wider world inside a restrictive local trading bloc was the real xenophobia.

Yes, many Commonwealth countries are economically disadvantaged — much more so than most of Europe. The British tradition of fair play ought to stoke our determination to bolster international trade within the community.

That’s just one more way in which the Commonwealth can be a terrific force for good.

If the Queen had not devoted so much time and energy to the Commonwealth, it might not exist at all today. Without that famous foxtrot, President Nkrumah could easily have pulled out and wrecked the entire diplomatic structure.

Naturally, in the coming years, it will have to evolve to fit into a changing world, but tradition is as important as evolution.

The Commonwealth is the Queen’s great bequest to the world. It has made a fantastic difference to my life and I’m deeply grateful for it.

So as I raise a toast to the monarch on her Platinum Jubilee, I will be remembering my grandmother, too — and saying thank you on her behalf, as well as my own, for all it has brought the world.