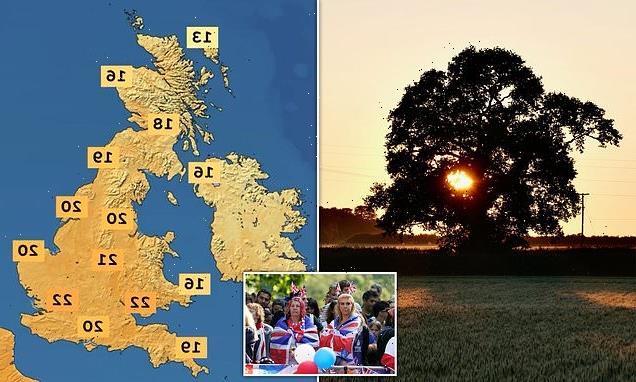 Happy and GLORIOUS! Britain will bask in balmy 22C heat as four days of Platinum Jubilee celebrations and street parties kick off under the sunshine – with temperatures set to climb even higher tomorrow

Britain is set to enjoy 22C (72F) heat today with temperatures climbing even higher tomorrow as the nation kicks off its Platinum Jubilee celebrations.

Meteorologists confirmed the Trooping the Colour ceremony will go ahead without downpours this morning after fears this week’s wet weather would continue into the four-day bank holiday weekend.

The Met Office predicts long spells of sunshine with the mercury rising as high as 25C (77F) tomorrow, with Britons able to bask as they enjoy street parties, barbecues and other outdoor events.

A tropical blast of air will keep Britain fine and dry in most parts, although rain could return by the end of the weekend — with warnings of storms in London and the South East.

It comes after organisers of the Big Jubilee Lunch yesterday told Brits to keep their garage ready as a backup venue in case Sunday ends up being a washout. 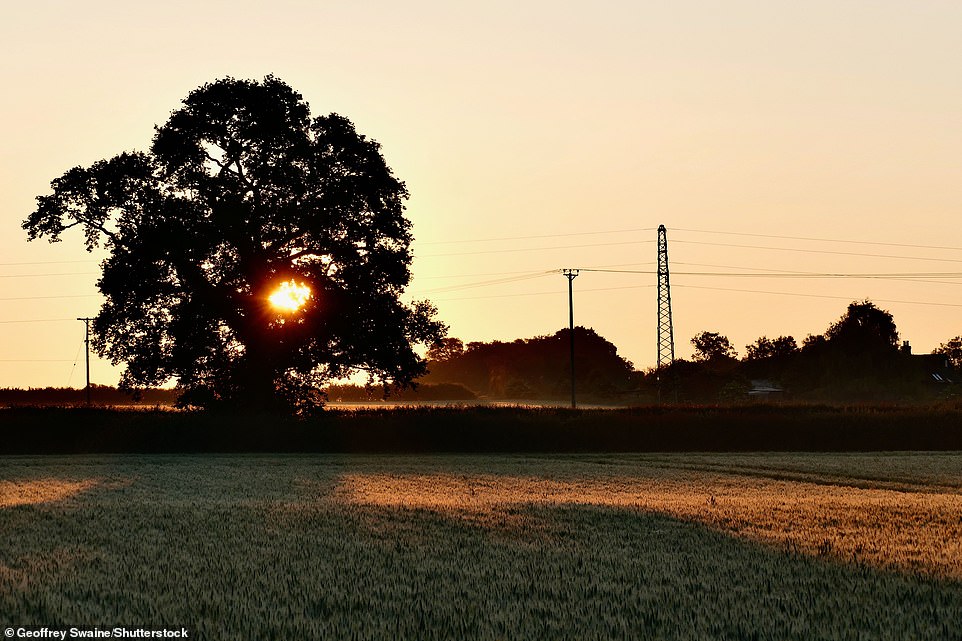 Britain is set to enjoy 22C (72F) heat today with temperatures climbing even higher tomorrow as the nation kicks off its Platinum Jubilee celebrations. Pictured: The sun rises at the start of the Jubilee weekend over wheat fields in Dunsden, Oxfordshire 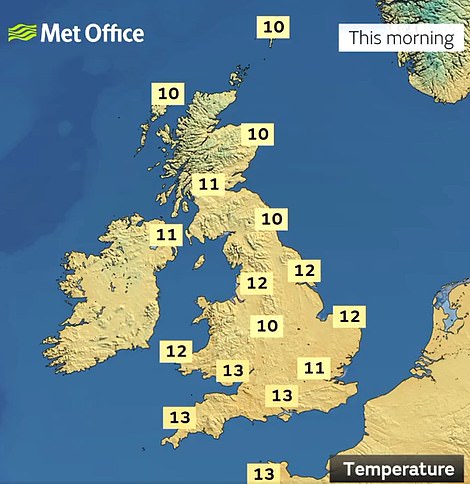 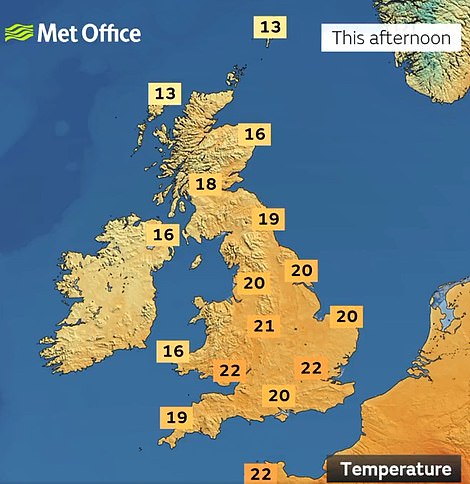 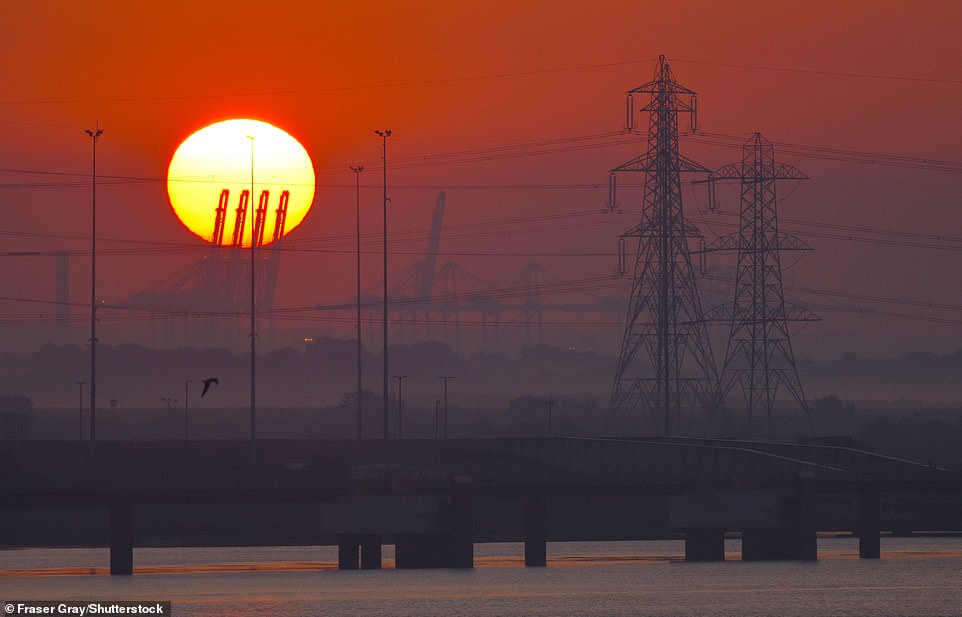 The Met Office predicts long spells of sunshine with the mercury rising as high as 25C (77F) tomorrow, with Britons able to bask as they enjoy street parties, barbecues and other outdoor events Pictured: The rising sun evaporates the early morning mist from the industrial landscape of East Tilbury in Essex

Deputy chief meteorologist at the Met Office Helen Caughey told The Sun: ‘While it may be an unsettled start for some with showers for northern and western areas, many areas will see generally settled conditions over much of the long Jubilee Weekend, with plenty of dry weather and good spells of sunshine.

The Met Office said that the temperatures will be ‘closer to average for the time of year further south, likely peaking at around 20C to 22C on Thursday, but the south seeing temperatures of 23-25C, possibly 26C on Friday’.

But the weather could take a turn later in the weekend, with rain and some thunder expected by Sunday in the South East.

Ms Caughey said: ‘The main source of any uncertainty for the weekend itself is to do with how far a plume of warm air to the south encroaches over southern areas of the UK.’

She said the front could ‘glance the far South East on Saturday and Sunday’, bringing the risk of showers in some parts — although most of the heavy rain will be restricted to Europe. 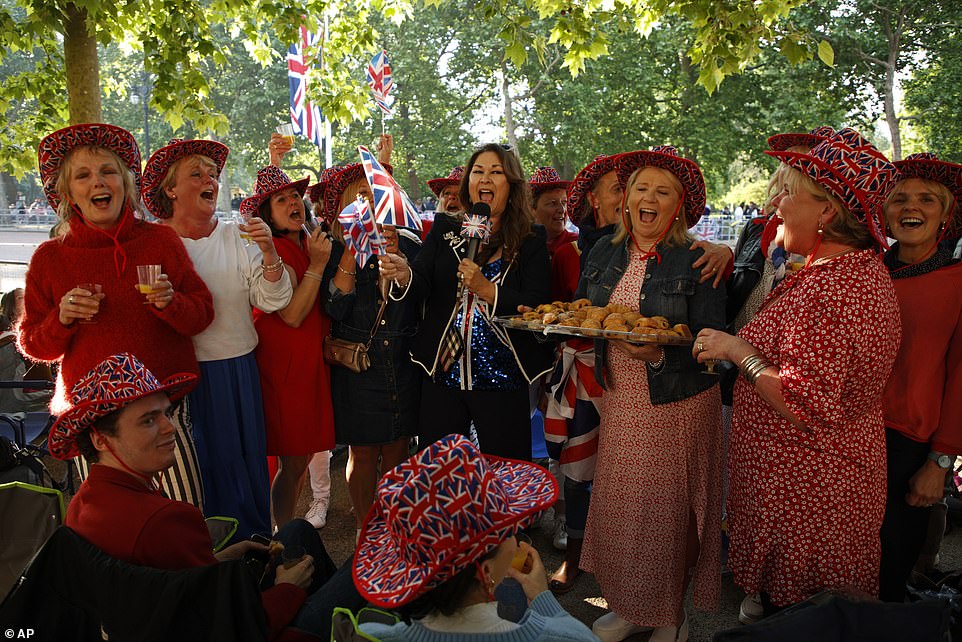 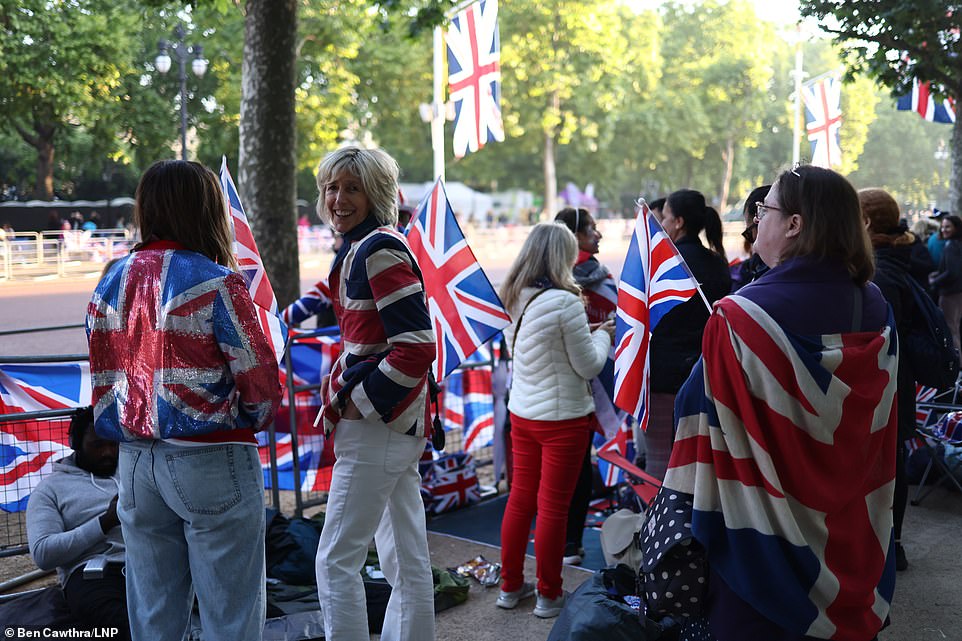 Devoted royalists will watch as the colour – or flag – is trooped by the 1st Battalion Irish Guards plus more than 1,500 officers and soldiers from the Household Division 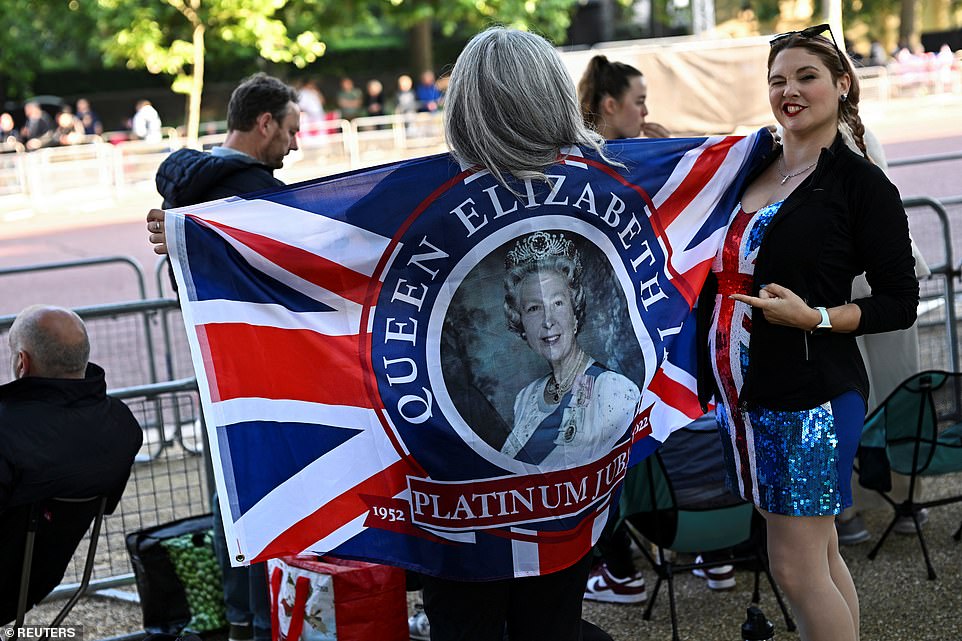 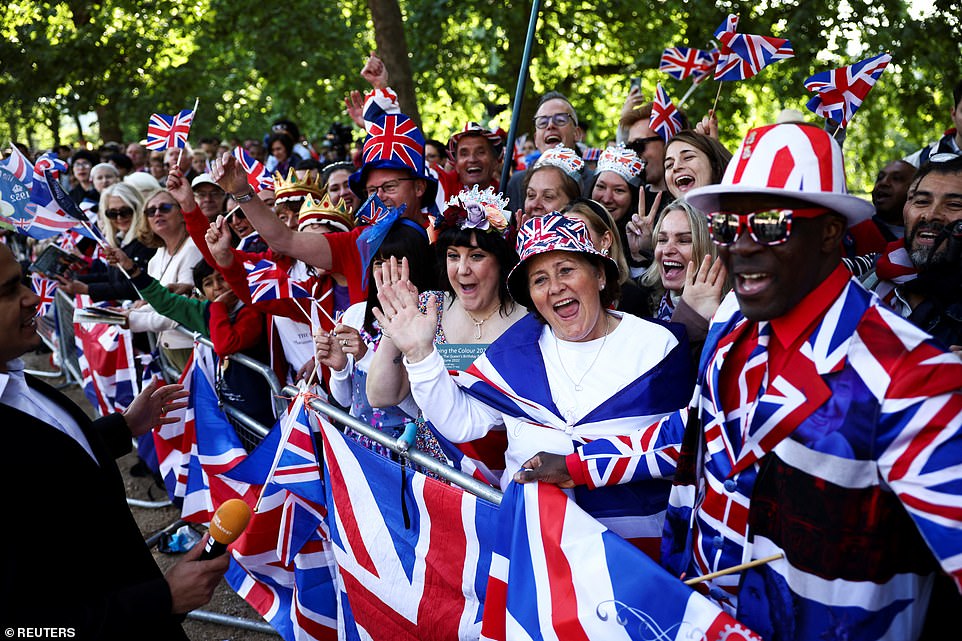 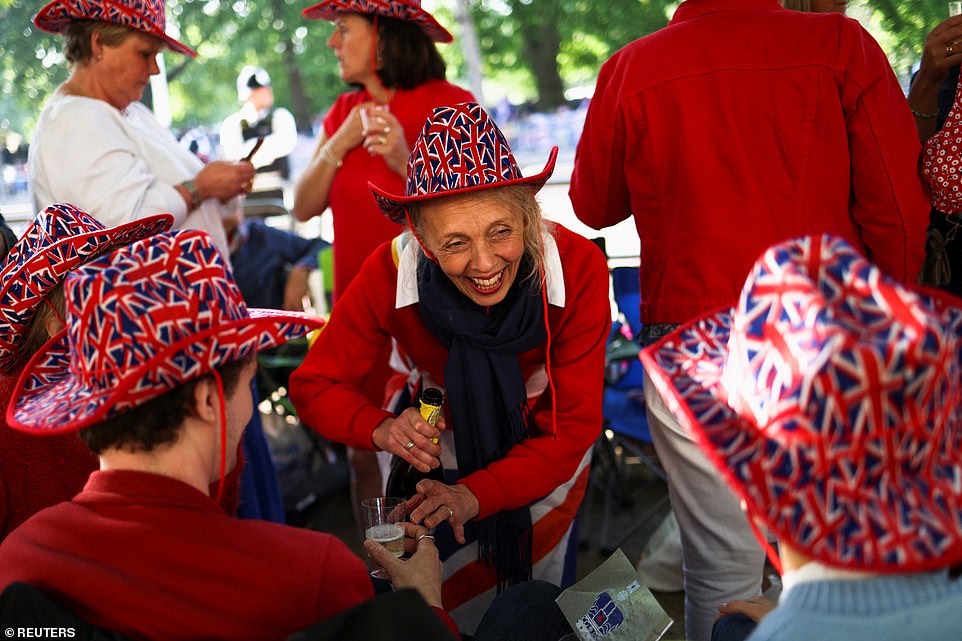 Groups cracked out glasses of bubbly and began singing God Save the Queen as early as 8am today – waking up the hardcore fans who have slept in chairs, tents and even on the pavement overnight to secure a prime spot for today’s celebrations

BBC Meteorologist Chris Fawkes, said there will be a ‘sunny start to [Thursday] morning if some what cool, but temperatures will quickly rise’.

Royal superfans have adorned themselves in Union Jack blazers, flags and hats as they lined The Mall this morning to watch the Queen’s historic birthday parade kick off at 10am.

Devoted royalists will watch as the colour — or flag — is trooped by the 1st Battalion Irish Guards plus more than 1,500 officers and soldiers from the Household Division.

The Trooping the Colour will then mark the monarch’s official birthday, as has been tradition for the last 260 years. This year the colour will be trooped by the 1st Batallion, Irish Guards, with up to 1,450 officers and soldiers from the Household Division, together with 400 Army musicians and around 240 horses.

Prince Charles will take the Salute, joined by Prince William, a Colonel in the regiment and Princess Anne.

Royal fans across the country who aren’t lucky enough to have a space along The Mall can watch events unfold on huge screens in nearby St James Park, or in Princes Street Gardens in Edinburgh or Bute Park in Cardiff.

Saturday looks dry, with temperatures in the low 20s and spells of sunshine for much of the country as an area of high pressure moves in.

While Sunday promises to be dry and bright for many of the millions gathering at more than 200,000 special lunches, showers are forecast for London and the south east.

Lindsey Brummitt, Programme Director at Eden Project Communities, organisers of The Big Lunch, suggested it was best to prepare for any eventuality.

‘While sunshine isn’t guaranteed, we know that a bit of rain won’t dampen British people’s passion for street parties and community get-togethers!’ she told MailOnline.

‘Luckily, it’s not too difficult to weatherproof a street party and adapt to the elements — we’d recommend gathering in the garage, bringing out the brollies or even taking the celebrations indoors if needed. Rain or shine, it’s set to be a corker!’