American transgender swimmer Lia Thomas has spoken for the first time since becoming a lightning rod for the debate over equality in sport.

She declined all media requests during the NCAA (National Collegiate Athletic Association) championships in March but spoke to ESPN and ABC in the US overnight on Tuesday (AEST), saying her transitioning was never about gaining an advantage.

Thomas swam on the men’s team at Penn for three seasons before joining the women’s competition after a year off due to all college sport being cancelled in 2020 as a result of the COVID-19 pandemic.

“The biggest misconception, I think, is the reason I transitioned,” Thomas said. “People will say, ‘Oh, she just transitioned so she would have an advantage, so she could win.’ I transitioned to be happy, to be true to myself.” 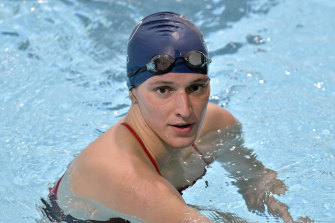 Eleven-time Olympic medallist McKeon declared that competing against trans women was “just not fair” while Coe was even more direct, telling The Guardian that the “integrity and future of women’s sport” was at stake, claims rejected by Thomas.

“It’s no different than a cis woman (a person who identifies as female which is the same as the sex they were assigned at birth) taking a spot on a travel team or a scholarship. It’s a part of athletics, where people are competing against each other. It’s not taking away opportunities from cis women, really. Trans women are women, so it’s still a woman who is getting that scholarship or that opportunity.”

Thomas was adamant the criticism would not stop her swimming, nor pursuing her Olympic dream.

“I’ve been able to do the sport that I love as my authentic self,” she said. “It’s been a goal of mine to swim at Olympic trials for a very long time, and I would love to see that through.”

Sports news, results and expert commentary. Sign up for our Sport newsletter.