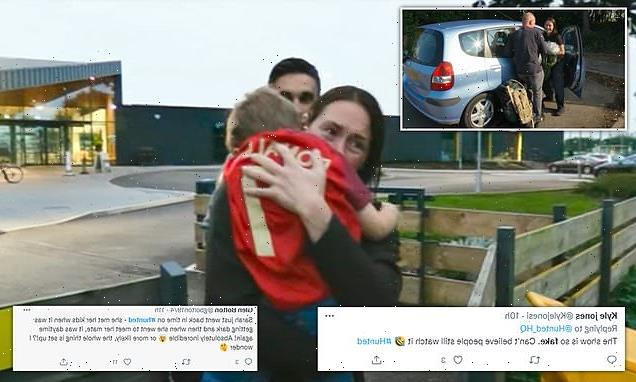 Viewers of Channel 4’s Hunted have slammed the new series as ‘fake’ after spotting a contestant go from night to day in back-to-back scenes.

The gameshow sees volunteers act as fugitives, who must avoid CCTV, ATMs and phone calls in a bid to remain untraced for 25 days.

Turning their backs on their home comforts to go on the run without being caught, they are each given a bank card with access to £100 and a cameraman who discreetly follows their every move.

But the rules of the game are simple – stay hidden for as long as possible, while being hunted by a team of ex-military, police and CIA agents, experts in the art of surveillance and capture, in a bid to win a share of £100,000.

In last night’s episode, mother-of-two Sarah Kibble, from Hampshire, was shown reuniting with her children at their football club on a dusky evening – before moments later, she was depicted as meeting up with a friend in the middle of the day.

Many of those watching were left baffled by the scenes, with one writing: ‘Sarah just went back in time on Hunted – she met her kids when it was getting dark and then when she went to meet her mate, it was daytime again! 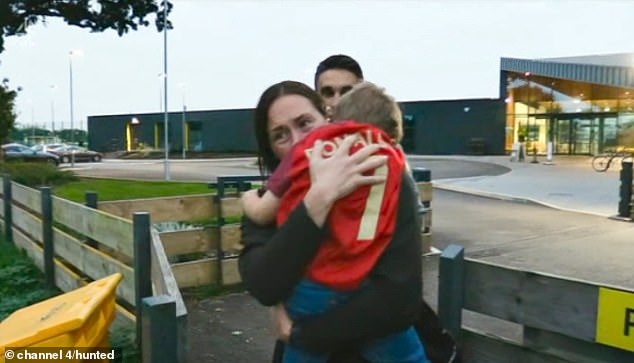 Viewers of Channel 4’s Hunted have slammed the new series as ‘fake’ after spotting Sarah Kibble, from Hampshire, go from night to day in back-to-back scenes 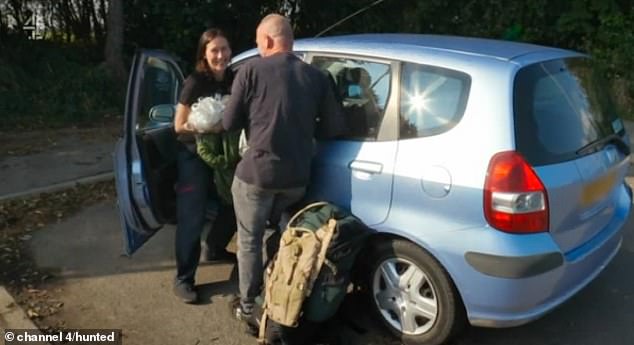 Apparently moments after reuniting with her children at a football club in the dusky evening, she met up with a friend in the broad daylight

‘Absolutely incredible…or more likely, the whole thing is set up?! I wonder.’

Another added: ‘The show is so fake. Can’t believe people still watch it.’

A third commented: ‘This is the most fake programme I have ever watched! Hence I don’t bother watching!’

At the start of the programme, the hunters said Sarah was doing a ‘good job of being elusive.’ 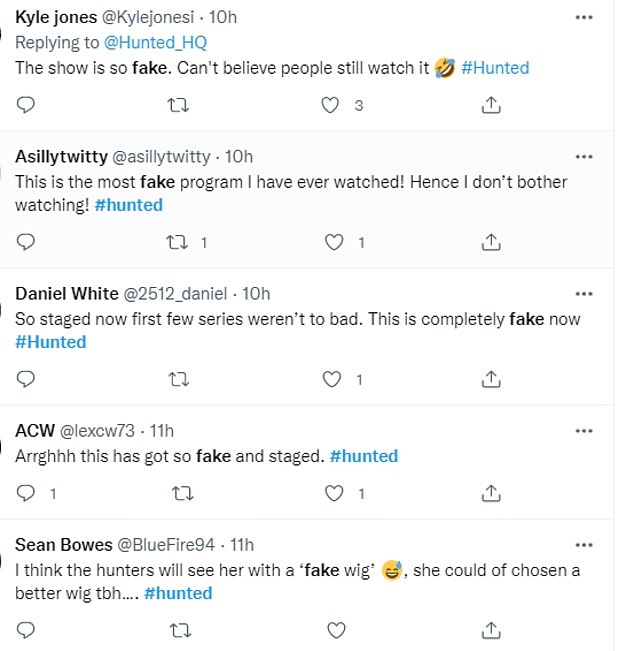 The ex police officer, who was also part of the military, travelled to the Isle of Wight to hide from the Hunters.

But the team predicted she would struggle to operate as a lone wolf and said she would likely reach out to friends and family.

The mother-of-two made her way to see fellow soldier Sally who she toured two tours of Iraq with.

She said that seeing her newborn baby was making her think of her own sons, saying: ‘I’ve said the whole way through this, I’m a penguin – the dad stays with the kids and the mum goes off to get the goods. It’s for them isn’t it.’ 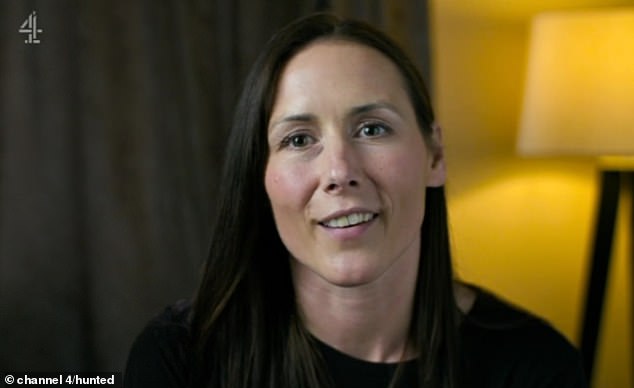 Early on in the programme, the team identified Sarah’s children as a potential weakness they could exploit in the mother-of-two

However throwing caution to the wind, she decided to risk travelling back to her home town of Norwich to visit her children.

Borrowing a car from a friend, she drove up through the country to the city, where she hoped to meet with a former colleague after seeing her children.

Sarah said: ‘I just need to be very careful.’

Meanwhile the team at headquarters had identified her two children as a weakness they could exploit.

Analyst Lindsay Blast was one of the people tasked with hunting down Sarah, saying: ‘You can always overreach yourself when emotion is involved.’ 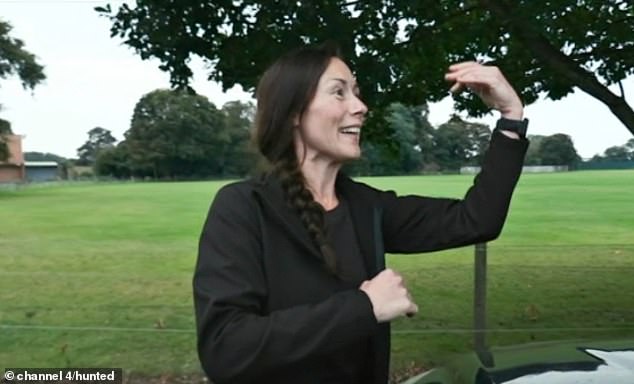 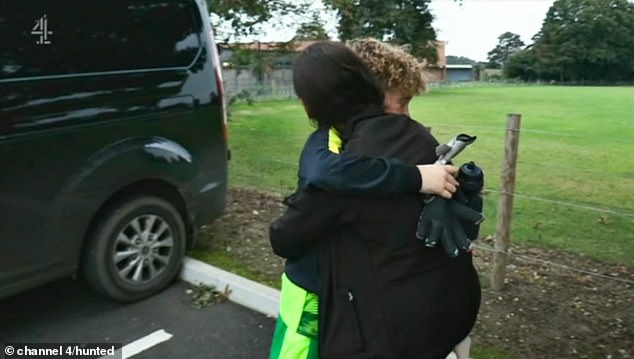 And they suggested she could try to see her sons playing football with their local team.

Suspecting she might try to reach out to her children, groundhunters Zoe and Floyd were deployed to the football club where her oldest son was training.

Meanwhile Sarah was also travelling to the football club, where she confessed she was concerned the hunters could try to find her.

But, having apparently arrived at the football club at desk, she managed to see her sons and beckoned them over for a hug. 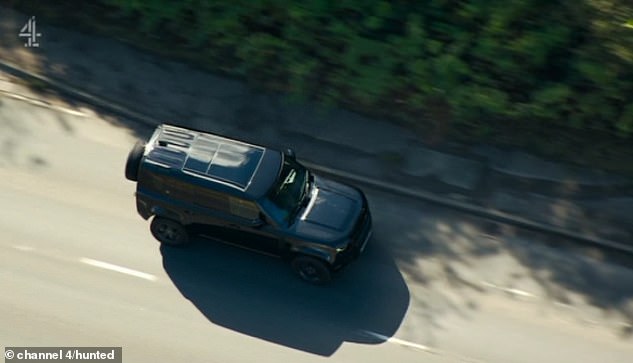 She couldn’t contain her emotion as she burst into tears while hugging her children, telling her  husband: ‘It’s so emotional Dan. I’ve missed you so much.’

At apparently the same time, the team at Head Quarters noticed movement on one of Sarah’s friends cars.

They decided to reroute Floyd and Zoe from the football club to try to intercept Sarah’s friend.

But the attempt was unsuccessful because Sarah switched vehicles to another friends car. 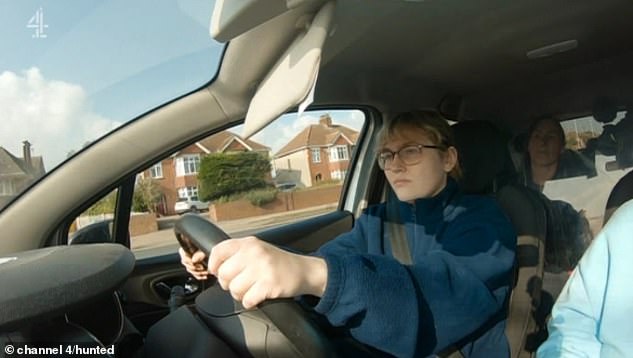 And in the next scene after Sarah met with her children, she was shown hopping in a car with a friend in broad daylight

However, viewers spotted an apparent error in the sequence, which was apparently all filmed in one day.

The interconnected scenes showed the hunter team travelling in broad daylight – while Sarah appeared to meet her sons in the evening.

Meanwhile after reuniting with her family at dusk, in the next scene the mother-of-two was shown meeting up with friends on a bright day.

Many suggested the programme had become too ‘fake’ with the way it was edited, with one writing: ‘So staged now, first few series weren’t so bad. This is completely fake now.’

Another added: ‘Arghh this has got so fake and staged.’

A third commented: ‘Never seen this before, but it seems very convenient they thought about the kids and the football game on this very day.’