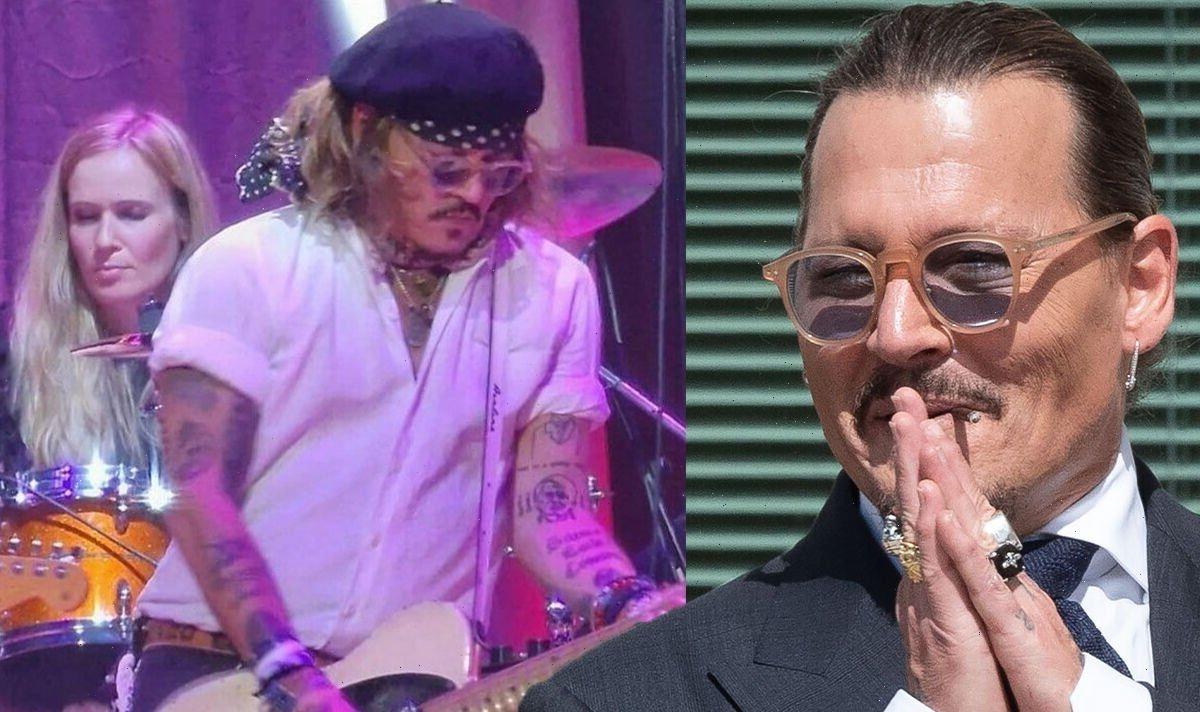 Johnny Depp, 58, is currently suing his ex-wife, Amber Heard, for £38.2 million ($50m) over an op-ed she wrote for The Washington Post in 2018. The Hollywood actor surprised many as he took to the stage in Sheffield with Jeff Beck in England, as the jury continue deliberations in the landmark case.

Jury deliberations continue from Tuesday due to the Memorial Day holiday, leaving Johnny time to escape the courtroom dramas.

The Pirates of the Caribbean actor jetted off to Sheffield to perform at Sheffield City Hall with his pal Jeff Beck.

The pair performed a cover of John Lennon’s Isolation, a song officially released by the pair in 2020 and has recently gained more success due to the ongoing libel trial.

The duo also performed covers of Marvin Gaye’s What’s Going On and Jimi Hendrix’s Little Wing, according to The Hollywood Reporter.

Along with a video of Johnny on stage, Iambobbylondon penned: “…and upward… WE LOVE YOU #jeffbeck #justiceforjohnnydepp.”

Flokpedals wrote along with a picture of the musical duo on stage: “Wasn’t expecting this…

“I thought he was in court but turns out he’s in Sheffield with Jeff Beck #johnnydepp #jeffbeck.”

Before becoming an actor Johnny had wanted to be a musician, with Johnny moving to acting after not achieving as much as he wanted in the music industry.

Johnny is also part of the group Hollywood Vampires, which features Alice Cooper and Joe Perry.

The performance was a change for Johnny who has spent most of his time since April 11 in district court in Fairfax, Virginia.

The actor is currently suing his ex-wife over a 2018 op-ed she penned for The Washington Post where she described herself as “a public figure representing domestic abuse”.

The Pirates of the Caribbean star was not named in the piece, titled “I spoke up against sexual violence – and faced our culture’s wrath. That has to change”.

However, Johnny claimed that it falsely implies that he is a domestic abuser, something he strongly denies, claiming it has affected his work.

Amber is counter-suing her former husband for $100 million, accusing Johnny of orchestrating a “smear campaign” against her.

She also described this lawsuit as a continuation of the constant “abuse and harassment” she has had since her relationship with Johnny began.

In the closing arguments on Friday Johnny’s lawyer, Camille Vasquez, told the jury how Amber has “ruined” Johnny’s life.

In her searing final words to the jury, Ms Vasquez told jurors that on May 27 2016, Amber walked into a courtroom in Los Angeles, California, and filed a restraining order against her former partner.

“In doing so ruined his life by falsely telling the world that she was a survivor of domestic abuse at the hands of Mr Depp,” she said.

“What is at stake in this trial is a man’s life.”

She continued: “There is an abuser in this courtroom but it is not Mr Depp.

“There is a victim of domestic abuse in this courtroom, but it is not Ms Heard.”