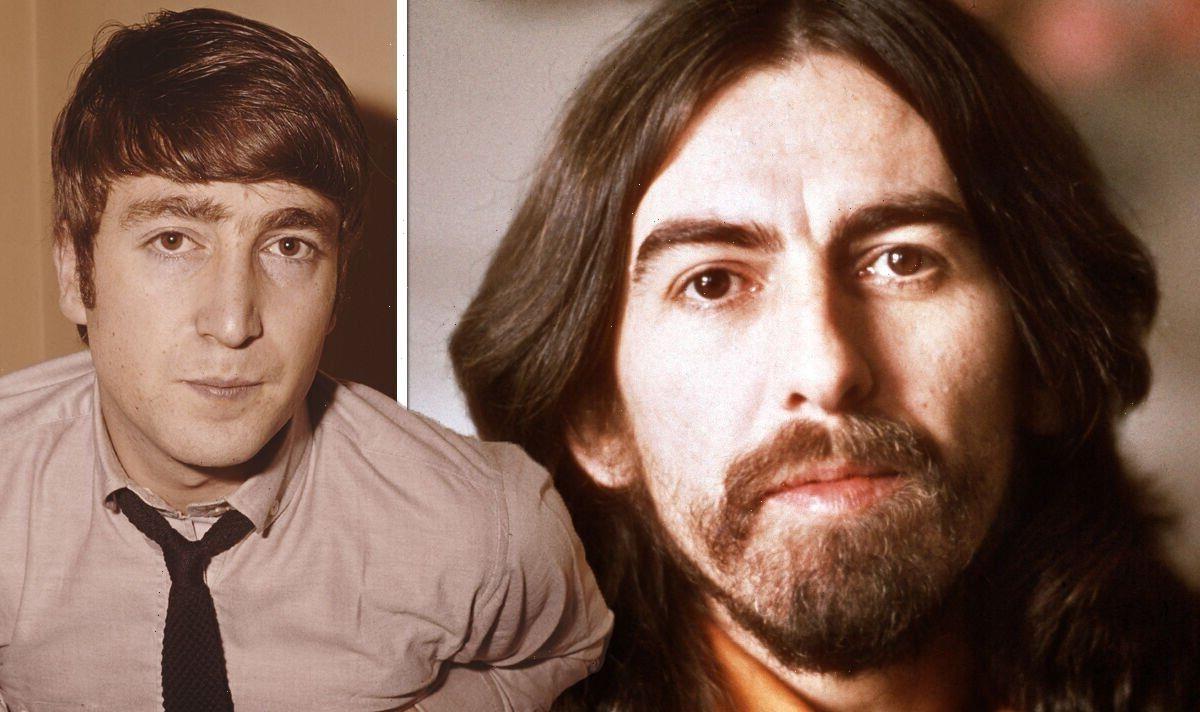 Former members of The Beatles, George Harrison and John Lennon had not seen one another for years by the time the 1970s came around. The band had split up in 1970 and each of the Fab Four went their separate ways. All four members started their own solo careers and spent some much-needed time apart.

Lennon and Harrison were particularly bitter with one another during their final years as a band.

During the recording of The Beatles’ final album, Let It Be, Harrison famously announced: “I think I’ll be leaving the band now.”

The shocking moment came after The Quiet Beatle grew frustrated over Lennon and Paul McCartney controlling the musical direction of the band. This event was also revisited during the recently-released Disney Plus series Get Back by Lord of the Rings director Peter Jackson.

Harrison didn’t quit though, he returned to finish the album before the band played one final concert on a Savile Row rooftop ahead of parting ways for good.

But tragedy struck in 1980 when Lennon was murdered outside his home, The Dakota, in New York City. In 1990 Harrison looked back fondly on seeing his friend acting normal just a couple of years before Lennon’s untimely death.

Harrison remembered: “I was in New York at his house, at the Dakota. He was nice, just sort of running around the house making dinner.”

He recalled Lennon had unexpectedly taken a leaf out of his book while he was cooking that evening.

“He was actually playing a lot of Indian music,” he smiled. “Which surprised me, because he always used to be like a little bit [annoyed] when I was playing it.”

He added: “So he had hundreds of cassettes of all kinds of stuff. He grew into it.”

Harrison then spoke about when he first heard about Lennon’s assassination.

“Well, at first I thought he maybe just got wounded,” he explained. “It’s hard to accept or to believe at first. But it’s no different really to anybody having news about anybody they know.”

He emotionally added: “The shock… I’m sure a lot of people were just as shocked as I was about John Lennon … It is all nasty business when people get shot.”

Harrison – who was unknowingly just 11 years away from his own death – tried to stay positive about losing Lennon so early, however.

Harrison discussed the difficulty of losing his friend.

He said: “I hadn’t seen him for so long. I didn’t see him for two years anyway, occasionally [I’d] maybe send a postcard. It’s knowing that he’s on the other end of the telephone if you do want to call. That’s the difference. Now you need the big cosmic telephone to speak to him.”

Despite how emotional the life event was, Harrison explained how he could not “get sad” about it.

As a devotee of Hare Krishna, he had certain beliefs about what happened after life ended

Harrison said: “I believe that life goes on, and so to me, I can’t get sad. I’m sad that I can’t go play guitars with John but then I did that, anyway. I did that for a long time. So, we’ll meet again somewhere down the line.”

He died in the company of his wife, Olivia Harrison, his son, Dhani Harrison, and his close friend, Ravi Shankar.