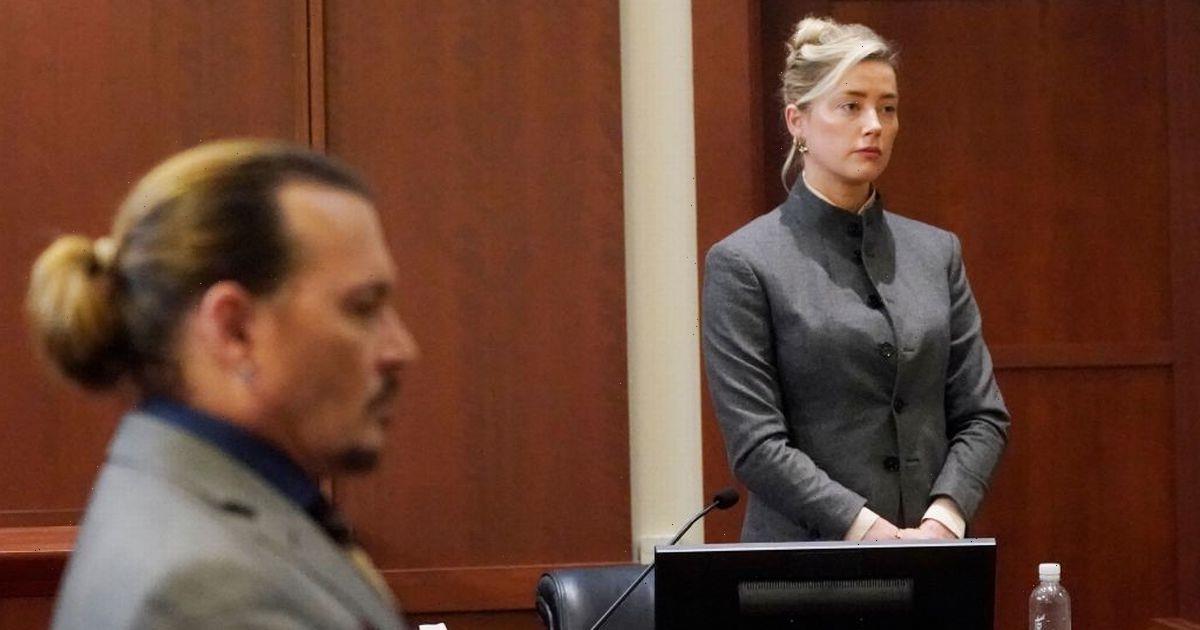 The closing arguments in Johnny Depp's high-profile six-week libel lawsuit against his ex-wife Amber Heard are being heard in a Virginia courtroom on Friday.

Johnny was seen in a navy suit atop a light blue shirt as he entered the Fairfax County District Court after waving to supporters outside. Amber wore a grey blazer with a monochrome button-down shirt for her final day in court.

Pirates Of The Caribbean star Johnny's legal team were first to give closing arguments, with Camille Vasquez speaking to the jury about when Amber filed a restraining order against her former partner on May 27 2016.

"In doing so, ruined his life by falsely telling the world that she was a survivor of domestic abuse at the hands of Mr Depp," she said. "On May 27 2022, exactly six years later, we ask you to give Mr Depp his life back."

Camille continued: "What is at stake in this trial is a man's life."

Camille also said that Amber suffered from personality disorders that are characterised by "powerful and explosive anger" and was "violently afraid of abandonment (and) desperate for approval".

She said the court had heard evidence from former colleagues, employees and friends about Ms Heard's violent tendencies.

"Mr Depp's greatest crime in her mind… is that he splits, that he leaves the fight when she gets physical," Ms Vasquez said. "She would rather be in a fight than have him leave."

She added that Ms Heard had been verbally abusive to the actor, calling him names, including references to him being "washed up" and "a deadbeat dad".

"Ms Heard would take the low blows and hit him where it hurts, his children," Camille said.

Johnny's lawyer continued to say that her client's ex-wife's abuse allegations against him were “an act of profound cruelty” to “true survivors of domestic abuse”.

She went on: "It is disturbing to think Ms Heard would make up the horrific tales of abuse that she testified to in this courtroom,” she said.

“What Ms Heard testified to in this courtroom is a story of far too many women, but the overwhelming evidence and weight of that evidence is that it is not her story."

Camille went on to say that the story was "false" and "defamatory".

Audio recordings were also replayed to the court in which Amber Heard could be heard admitting to hitting Johnny Depp, mocking him, and calling him “a baby”.

During Benjamin Chew's closing arguments on Johnny's behalf, the lawyer focused on the actor's character, background, and career, as well as the high-profile relationships he's had with women, and how none of them have accused him of abuse.

“He does not deserve to have his life and legacy destroyed by a vicious lie,” he went on to tell the jury.

Benjamin went on to say that his client's case isn't about money or punishing his ex-wife, but to free him from "the prison in which he has lived for six years”.

After their morning break, the court reconvened and Amber's lawyers begin their closing statements.

Ben Rottenborn accused Johnny of starting a "smear campaign" against Amber after she was the one to leave him.

"In Mr Depp’s world, you don’t leave Mr Depp," he said. "And if you do, he will start a campaign of global humiliation against you. A smear campaign that lasts until this very day.”

Speaking to the jury, Ben went on the ask the question of if the First Amendment gives Amber the right to write what she did in her 2018 op-ed for the Washington Post.

However, he also noted that Amber wasn't give the option to approve the headline of the piece.

He then went on to go through some of the evidence previously shown of texts exchanged between Johnny's "drug buddy" Paul Bettany regarding burning Amber's body.

Further on in his argument, Amber's lawyer told the jury that they would be an "accomplice" to Johnny's abuse if they rule in his favour.

“In trying to convince you that Mr Depp has carried his burden of proof in proving that he was never abusive to Amber on even one occasion, think about the message that Mr Depp and his attorneys are sending to Amber and by extension to every victim of domestic abuse everywhere,” he said.

Ben also alleged that some of the witnesses in the trial are "on his payroll", and said they were "telling [the jury] whatever they need to tell you to get on his side".

In addition to going over previously shown texts, Ben also played videos taken by Amber, as well as photographs of the Aquaman actress' alleged injuries to her face.

He added that if Amber was faking the photos, she would have made them look more extreme than the photos shown in court.

Elaine Bredehoft then began her closing arguments for Amber, and accused the Pirates of The Caribbean actor of going after her for nothing, and that he wants to put her through another court case.

She also accused him of having anger issues that have nothing to do with his ex-wife.

Elaine went on to Johnny's lawyer Adam Waldman, and accused him of making false statements.

Amber is countersuing her ex-husband, who was first to file a legal claim, over statements made by Adam, which were quoted in Mail Online articles in 2020.

With this in mind, she said that the actress was "fighting back".

"[Amber] finally has said 'enough'. And we're asking you to finally hold this man responsible. He has never accepted responsibility for anything in his life."

She went on to ask the jury to "make [Johnny] accept responsibility" and to be held "legally responsible for his actions".

Elaine also detailed the work opportunities that fell through as a result of the defamatory statements made about her.

Throughout her argument, Johnny's lawyer Benjamin objected to several of Elaine's claims.

Depp's defamation case began on April 11, 2022, in Fairfax, Virginia, and has put his relationship with Heard under a microscope as they discussed all sides of the pair's history.

The case was made to the courts after Amber Heard's op-ed in the Washington Post in 2018, where she discussed being a victim of domestic abuse.

Despite not being named in the article, Depp has claimed her allegations in the piece made it hard for him to land movie roles and has departed from lead roles in major franchises such as Fantastic Beasts since the article.

The jury is set to begin deliberations after closing arguments are made on Friday morning.

This comes just days after model Kate Moss disputed Amber's claims that Johnny had pushed her down the stairs whilst they were dating.

World-famous supermodel Kate and Edward Scissorhands actor Johnny were the ultimate 90's couple in their heyday, and they dated from 1994 to 1998.

Kate was called to the virtual stand on Wednesday to describe an incident when the pair were on holiday in Jamaica when they were dating, after Amber claimed she "heard a rumour" that Kate was pushed down the stairs by Johnny.

Kate said: "He never pushed me, kicked me or threw me down any stairs."

Meanwhile, Amber has tearfully spoken of the impact of the trial, stating she has received death threats to herself and her baby daughter, Oonagh Paige Heard.