The photogenic 31-year-old is easily the restaurant’s most flamboyant occupant, her wide, megawatt smile complemented by a painted denim jacket, huge geometric earrings and a deep hot-pink headscarf wound into a knot, crowning her head. 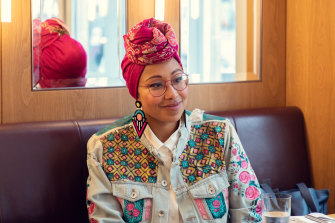 ‘I built my life again from scratch’: Yassmin Abdel-Magied at lunch with Latika Bourke at London’s Whitechapel Gallery. Credit:Liliana Zaharia

When we both end up ordering the same meal – English asparagus with egg mayonnaise and cured egg yolk, and the asparagus and pea tart with Spenwood sheep’s cheese and pea shoots — she switches her starter to the Nutbourne farm tomatoes with Graceburn marinated cheese, croutons and sorrel.

She eagerly invites me to taste hers.

“It’s East London, mate,” she laughs, when I tell her it’s the first lunch interview I’ve done where I’ve shared dishes with the subject.

It’s a revealing geographical marker she adopts, given we are two Australian women in the UK, living in a city of 9 million people, brought together by the country we were both brought up in shortly after our births — hers in Sudan, mine in India.

The reaction to that Anzac Day post left her traumatised, heartbroken and feeling un-Australian.

Her exodus to London came in 2017 when, on a trip to Britain for a Muslim women’s event, she recounted her cancellation to sympathetic friends.

“They were saying: ‘What are you talking about? Dude, that would never happen … come here, you’re just one of many’,” Abdel-Magied recalls.

“So I changed it all, I left. That was the only move I had. I picked up, I packed up. I moved to a place where I didn’t know anyone and I built my life again from scratch and that is something I’m really proud of.”

Ironically, what she describes is the prized, if not mythical, Australian dream that politicians, including those who led the backlash against and hounding of her, often spout as the country’s defining characteristic.

“The irony is, for a while I was that,” Queensland’s former Young Australian of the Year says, with a smile.

Abdel-Magied’s journey from bright young activist to national villain is something she explores in her latest book, Talking About a Revolution, a collection of essays and writings on race, gender, identity and, yes, Australia.

But why she provoked the fury of conservative writers, News Corp commentators and Coalition politicians, to the extent where she no longer feels that home can ever again be Australia, remains a mystery to her, four books later. 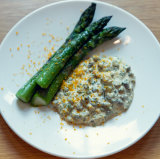 On the menu: English asparagus with egg mayonnaise and cured egg yolk.Credit:Liliana Zaharia

“I will never be able to answer that question unless I maybe meet with [Rupert] Murdoch one day and I’ll be like, ‘Bruv, what happened, why did you pick me, what did I do to you?’.

“Someone said to me my problem was that I wore colourful clothing and so I looked good on a front page. That is the weirdest backhanded compliment I have ever gotten,” she laughs.

If there is any nugget of truth to this assessment of Abdel-Magied’s photogenic potential, today’s outfit shows she is defiant and undefeated.

Abdel-Magied’s tone is easygoing and jovial but the scars of the events that caused her Australian life to collapse in her mid-twenties are deep, even though she has clearly thrived inBritain, both personally and professionally. She recently married a British Muslim man who, she says very firmly, remains as private as her hair.

“I got here [London] and people were into me and I was like: ‘What, what do you mean? It’s outrageous’.”

The contrast to how the UK responds to her public musings compared with Australia’s reaction to her swiftly deleted “LEST.WE.FORGET. (Manus, Nauru, Syria, Palestine …)” Facebook post has vindicated her decision to quit the country.

She agrees she feels she was rejected by Australia. 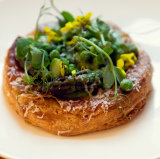 As her world collapsed around her, she remembers going to the bathroom and feeling overwhelmed by sadness, incapable of remembering what it was like to not feel that sad.

She sought therapy and learned that she had suffered trauma.

“I’ve compared it in the past to an abusive partner because it’s such a complex relationship. On the one hand, there are lots of good times there and on the other hand, there’s been so much harm and hurt that you can never quite be sure what that relationship was like at all.”

She says the treatment meted out broke her heart and her relationship with the country.

“I used to be really proud. I went on international tours and public diplomacy, I loved Australia – that’s the heartbreaking thing about it,” she says. 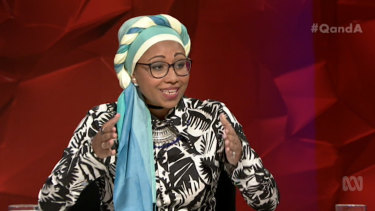 Jacqui Lambie and Yassmin Abdel-Magied were involved in a heated exchange on Q&A in 2017 over sharia.Credit:ABC

“You can only hate something so much after you’ve loved it so much. I really loved that country, and it broke my heart.”

Now, as a “Londoner”, her only Australian friends are ones from before she left. 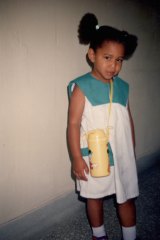 “My partner will tell you that if I hear an Australian accent, I will leave,” she says, prompting my instant apology.

The Australian net is something she feels she cannot escape, regardless of where she goes in the world.

“I was on this tiny beach in Croatia and this woman came up to me and said: ‘Are you Yassmin?’

“My defences immediately went up. I immediately shut down. Australians quite often feel a lot of ownership over me and they feel entitled to me and I feel like you don’t get that any more.”

“They asked me and I was like, ‘nah’, because every single conversation would be about ‘when are you coming back?’, ‘talk to us about the most traumatic experience of your life’,” she says.

Abdel-Magied has only returned to Australia a handful of times since 2017 for what she describes as “low-key” visits for weddings and to change her UK visa, which can only be done by returning to your home country.

They might be the last time she sets foot in Australia, which her parents still call home.

“I write in my book about giving up my Australian passport, I’m really seriously considering doing that,” she says.

“Part of it is about Australia, but part of it is I have a real issue with the broader system of borders and citizenship and the way that inequality is baked into the nation-state and the amount of violence that is enacted on literally hundreds of thousands of people because of borders and citizenship,” she adds, referring to Australia’s hardline treatment of asylum seekers.

She says the simple threat of revoking her Australian credentials, something she describes as an act of resistance or rejection, has elicited a revealing response.

‘I’ve emigrated, I’m not going back. I’ve emigrated in the same way my parents left Sudan, I have left Australia.’ 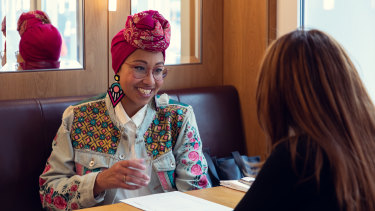 ‘Britain has way more opportunities for someone like me than Australia does, the US has more’, Abdel-Magied says.Credit:Liliana Zaharia

“People are really confronted when I say, ‘maybe I’ll give up my citizenship.’ They say: ‘Your parents did so much to get it, you should be grateful’,” she says.

“That tells me something about our relationship with the idea of citizenship and our idea of Australianness.”

Abdel-Magied jokes that rejecting her Australian passport would leave her only with a Sudanese one that is more of a liability than a help — it grants her visa-free access to fewer countries.

As a Sudanese citizen only, she’d be required to provide 13 documents, including a character document and invitation letters, in the event she wanted to visit her parents in Brisbane. 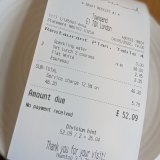 The bill from the Townsend restaurant in London.

“I’ve emigrated, I’m not going back. I’ve emigrated in the same way my parents left Sudan, I have left Australia.”

While she says nowhere is really home, she enjoys being a Londoner but believes ultimately it’s the United States that will suit her long-term goals of continuing to write books and pursuing screenwriting. She is pitching a television script of her fiction book, You Must Be Layla.

“Britain has way more opportunities for someone like me than Australia does, the US has more,” she says.

“And for better or for worse, the Americans really rate hustle, they love someone who’s been through it and picked themselves up. So, there are elements of my story that they really love.”

It would be the ultimate irony if being hounded out of Australia led to international success that she might not otherwise have had. Abdel-Magied has no regrets or self-pity about the way her life is panning out.

“Yes, I had a horrific experience, but I also had a lot of things go my way and I’m grateful for that. The experiences that I’ve had have earned me a wisdom and a clarity that would have taken me a long time to learn any other way.”