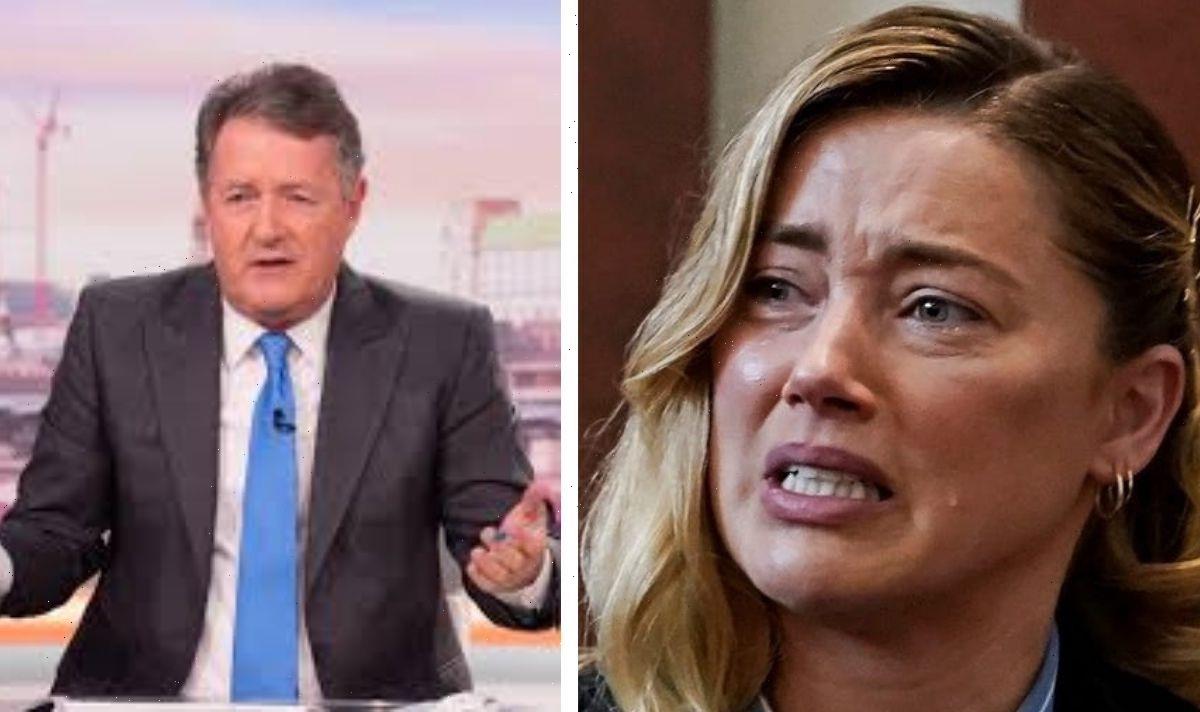 Piers Morgan referenced an article that described how Amber Heard had burst into tears as she took to the stand to recount the alleged “sexual violence” she experienced at the hands of her ex-husband Johnny Depp as their $100 million defamation trial continues.

What must people in Ukraine make of this self-pitying nonsense?

In view of his 7.9 million Twitter followers, Piers penned: “What must people in Ukraine make of this self-pitying nonsense?”

It comes as Amber had told the Virginia court of an alleged attack by her ex-husband, where she claimed he violently penetrated her with a glass bottle.

Amber claimed her ex-husband had abused her “physically, verbally, emotionally [and] psychologically” and that the negative publicity resulting from her reporting the abuse had damaged her reputation and career.

She pleaded in her final argument for the Pirates of the Caribbean actor to “leave me alone”.

She added: “The threats he’s made to humiliate me globally are being lived out in real time in front of you, ladies and gentlemen, for the past six weeks, and for the whole world, since there are cameras here.”

Many movie fans have claimed Amber is lying, using a #JusticeforJohnny hashtag and a campaign to have her removed from the Aquaman movies has attracted more than four million signatures.

However, Johnny lost his previous court case on the matter, where he sued The Sun for defamation, as the court ruled that allegations he was a “wife beater” were “substantially true”.

Piers has spoken out now, for the second time, to accuse Amber and Johnny of trivialising the war in Ukraine with their court battle.

His stance divided his Twitter fans as they debated the matter.

@forheavensake challenged: “There’s not a lot she can do about Ukraine, Piers, but I wouldn’t expect a man to have the faintest interest in the cause of an abused, coercively controlled, doubly humiliated in front of millions young woman by a much older, drunken, drug-taking psychopath like JD.”

@NeilFonda argued: “They probably feel the same way with your constant s****y sniping nonsense at certain royals or former royals,now living in America!”

@sbutler22 also defended Amber, writing: “If someone has worse problems than you it doesn’t make your problems go away.”

The social media user added: “I remember when you threw a hissy fit over a vegan sausage roll, there was a war going on in Syria at the time.”

@SimonTH62177261 echoed the opinion, describing Piers as “a supposed free speech warrior [fleeing] the set of his own show when confronted by a weatherman”.

@DianeJChoules then chimed in: “Domestic violence is not trivial.”

However @ShenGans spoke out in his support, questioning: “Piers when u gonna run for PM, we need someone in charge who is in touch with the ppl, and sees nonsense for nonsense….” (sic)

@StuartPeters14 mused: “I’m not sure that people in Ukraine are watching TV. All they’re watching is there country being slowly crushed.”

@FreylisB declared: “They’re probably too busy running to even care what some spoiled Hollywood brats do to each other in court before crying in their safe spaces.”

The Johnny Depp vs Amber Heard trial, where both are suing each other for defamation, has now entered its sixth and final week.