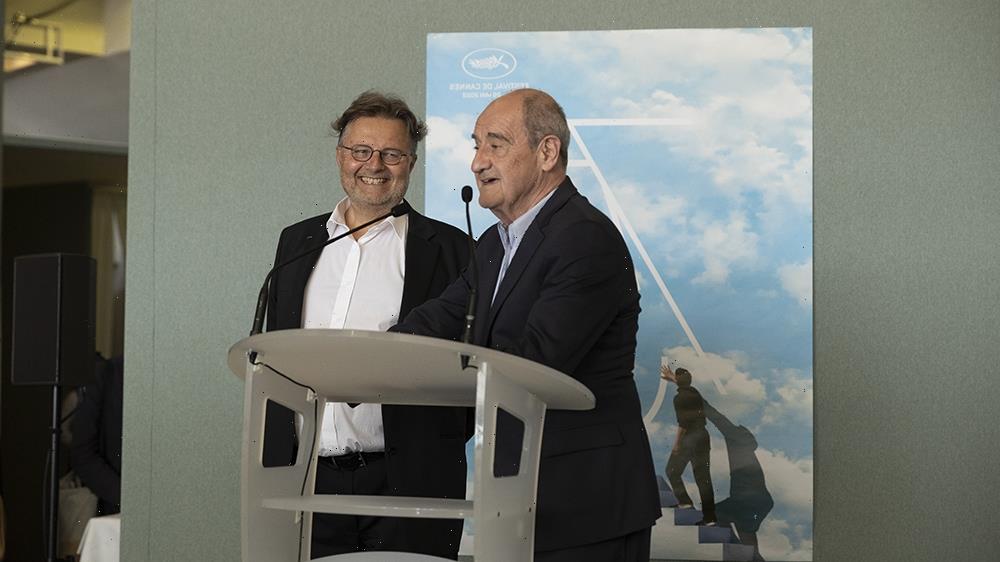 “He’s one of the fundamental builders of the Cannes Festival since without its economy and trade, neither cinematographic creation nor the trajectory of the Festival would have enjoyed the same reputation or impact,” Cannes Festival president Pierre Lescure said at a packed farewell cocktail on Monday to Jerôme Paillard.

Many will share Lescure’s sentiment. The drinks party was meant to be a farewell. It also served as a homage.

Now, however, the Marché du Film executive director is stepping down, handing over its reigns to Guillaume Esmiol at the end of this year’s 75th Cannes Film Festival.

“You leave behind a market in excellent health which has already pre-empted the arrival of digital and is walking on two legs, both physical and virtual. You launched this movement and many will follow in your path around the world at other festivals,” Lescure said.

In hi own speech, Paillard made sure to thank his team, as well as his wife, but also those who happened to change the course of his career.

“All of that started when I was working as a music producer in a record company, Erato, which was a subsidiary of Gaumont. Gaumont’s head of management came up to me one day and asked: ‘Would you be interested in working on the business side?’,” he recalled.

“If it weren’t for this person, Raphael Berdugo, I would be an oboe player somewhere in an obscure orchestra in the east of France. Or worse.”

Recalling humble beginnings and sorting out accreditation forms received by FedEx, he also reminded the audience about Marché milestones: the first themed party it threw, the opening of the Riviera in 2000, the beginning of cannesmarket.com, which later became Cinando, the launch of Producers Network in 2005 and Ventana Sur in 2009.

“I really loved all these years, walking and talking with you, trying to find new ideas. If I am here today it’s because of a series of encounters with people who trusted me and offered fantastic opportunities,” he added, citing Cannes Thierry Frémaux, who gave him “rare freedom and affection.”

“I am so happy to end my career, or this part of my career, with this successful, happy and almost sunny edition,” he said.

Paillard’s “adieu” is really a “hasta luego”: He will continue as co-director of Ventana Sur, launched by the Cannes Festival and March and Argentina’s INCAA film agency.

Meanwhile, many guests paid spontaneous tribute to Paillard at the cocktail, for his energy, his ken for innovation, and his humanity.

“Jérôme is an incredible person. He has always been so enthusiastic and so supportive, always looking for brand new things,” said Mònica Garcia Massagué, general manager at the Sitges-International Fantastic Film Festival of Catalonia.

“He has always been in an innovative frame of mind, challenging the practice of film markets,” he said.

Many guests mentioned his humbleness and approachability, including Grégoire Melin, CEO at Kinology.

“It will sound silly, but Jérôme has always been so… human. I just couldn’t believe he was the head of a film market,” he joked.

“Truth be told, these events always make us so tense. Thinking about Jérôme running this market would relax me a little. We knew that if we had a problem, or just thought we could have one, he would help us. Honestly, we should be thanking him more.”

“What I usually like in people is not just their professionalism, it’s the fact that they are good human beings,” added Marge Liiske, head of Industry@Tallinn & Baltic Event.

“Jérôme is the kind of person who goes skiing with you even though you are an absolute beginner, like me, and teaches you how to do it. Making sure you don’t fall.”

His longtime collaborators, including Administrative Director Michèle Waterhouse, also looked back at the past.

“One of the memories that keeps coming back is when he made us all work with email. When we started, we only had faxes! The whole team worried it would completely change our way of working. Which it did, but we had email addresses even before the festival!,” she said, noting that Paillard would push his team to the absolute limits yet try to stay close.

“In our first years, we would share our sandwiches in the office. The whole team. He has been very present, right to the end. This morning, he was asking me about debriefings. I went: ‘Jérôme, we are debriefing for next year. You are not here next year!’”

Lise Pedersen contributed to this article.