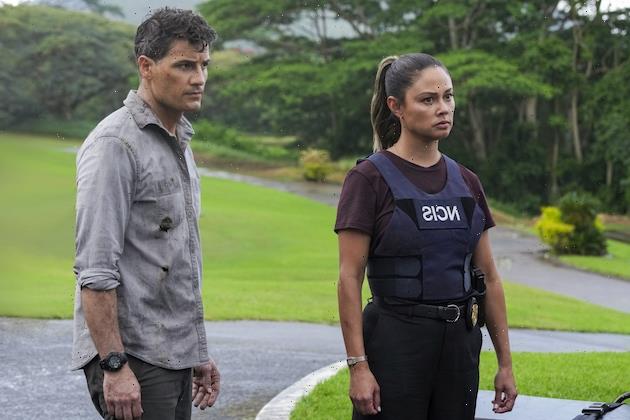 In Part 1 of the season ender, a Marine corporal appeared to be randomly killed after he tried to intervene in a couple’s public argument. But as Special Agent Jane Tennant (played by Lachey) and her team would come to learn from a visiting Captain Milius (Enver Gjokaj), the ill-fated corporal in fact had been targeted after he got wind of a top-secret prisoner exchange between Eastern Europe and the U.S. government — a swap that someone wanted to derail.

Milius, with Tennant serving as his escort, proceeded to carefully facilitate the exchange of Russian spy Anton Breskov for American journalist Thomas Kelly. But shortly after the U.S. contingent had boarded the Coast Guard plane Jane had secured, Kelly began seizing and foaming at the mouth, clearly poisoned.

In this week’s conclusion, Milius continues to work with Tennant and her team in the aftermath of the compromised exchange. Meanwhile, on the far more personal front, Whistler (Tori Anderson) takes Ernie’s (Jason Antoon) advice and makes a grand gesture in the hope of winning Lucy (Yasmine Al-Bustami) back.

Speaking with TVLine last week at CBS/Paramount’s Upfront soiree, Lachey promised a Part 2 that is explosive, delights “a lot of fans” and, in the end, comes back to a singular word.

“Here’s what I will say: It goes down. We literally end with a bang,” Lachey avowed. “We have some questions that people are go to want answers to, but at the end of all of it, I would give you one word that has driven us through the entire season — ohana, which means ‘family.’ We are there for each other, no matter what.”

“I promise you won’t be disappointed,” Lachey added, before teasing, “The ending will make a lot of fans very happy” — which may or not be in reference to this Inside Line/”Kacy” scoop from a few weeks back.

And as for Jane’s own love life? Might she and Joe firm up exactly who and what they are to each other, given that thousands of miles refuse to douse the undeniable heat between the sometime lovers?

“That is discussed,” Lachey said with a smile. “A lot of relationships are discussed. And not resolved, but… resolved.”

Want scoop on any NCIS series? Email InsideLine@tvline.com and your question may be answered via Matt’s Inside Line.