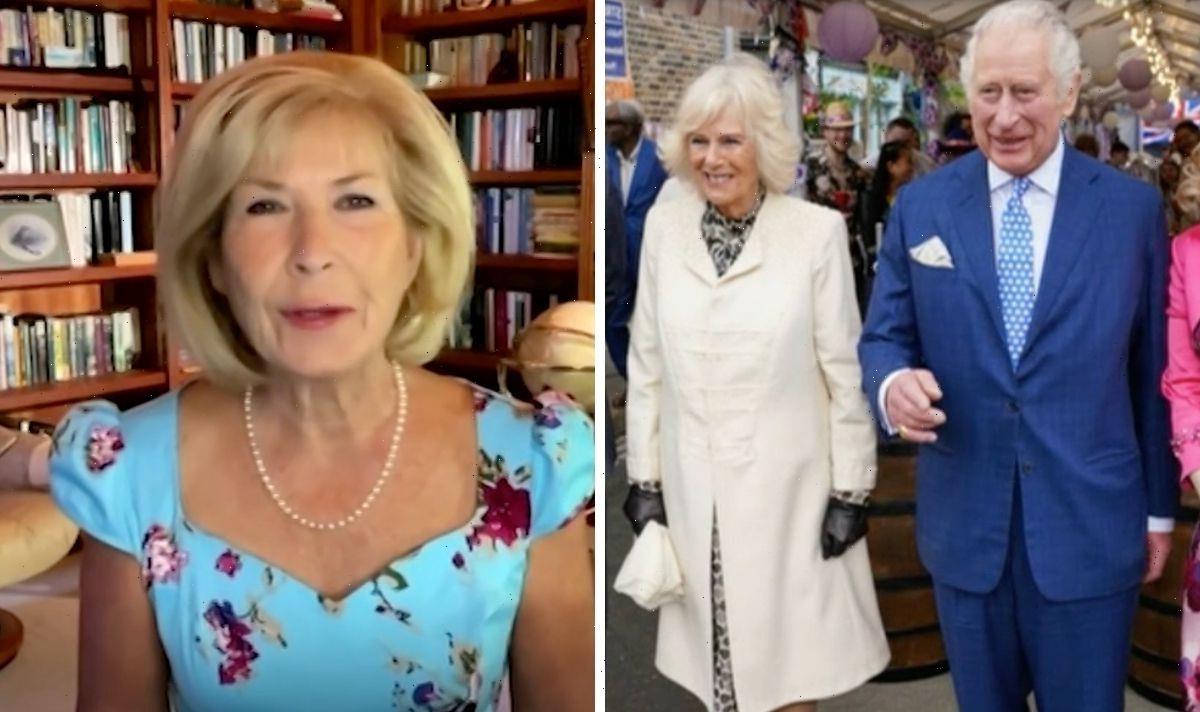 Jennie Bond joined Ben Thompson and Sima Kotecha on BBC Breakfast to talk about the Royal Family visiting the set of the long-running BBC soap opera, EastEnders. Over the years, many royals, including Queen Elizabeth II herself, have walked the streets of Walford, and what would an EastEnders Platinum Jubilee celebration for the Queen be without some royalty? Jennie Bond teased BBC Breakfast viewers with what they could expect.

The Prince of Wales and the Camilla, Duchess of Cornwall, will be attending a Walford street party in an upcoming episode.

The party, thrown by Mick Carter (played by Danny Dyer), is set to be one to be remembered.

Fans of the show will have to make sure they tune into the June 2 special as Walford partygoers will receive the surprise of a lifetime as Mick and Linda Carter (Kellie Bright) welcome the Duke and Duchess to Walford.

Appearing on BBC Breakfast to talk about their TV cameo, Royal commentator Jennie had the latest details.

Self-proclaimed “massive Enders fan,” Sima asked: “Can you tell us anything about this episode?”

Looking coy, Jennie replied: “Well, no. It’s a closely guarded secret with exactly what they say or do.”

However, she had heard whispers and continued: “But the word is that they are going to join the Jubilee party that has been filmed already.”

“I think maybe we are over-egging the pudding a little bit, and this came with the official announcement that they are starring in EastEnders.”

The panel laughed over the idea that the royal duo would have a substantial part and that the term “starring” should be taken lightly.

The former BBC News royal correspondent highlighted how it is a “bit of fun” and that the nation will enjoy their rare TV appearance.

“But hey, it’s a bit of fun,” the broadcaster stated.

“We could dress the whole thing up and say it’s ‘Royalty keeping in touch with modern culture and all the rest of it’, but it’s none of that, really.

“It’s just a bit of fun and a bit of them taking the mickey out of themselves, and that’s all to the good.”

Jennie herself had travelled to the set of the well-loved series 21 years ago in 2001 with the Queen and teased that the pair would probably step foot in the Queen Vic pub.

Recounting her trip with the monarch, she said: “She went behind the bar and looked a little bit uncomfortable as if to say ‘Oh my gosh, is someone going to ask me to pull a pint?'”

Prince Philip also attended, and she remembered fondly that he “clearly had not read his brief or watched any EastEnders.”

The royal couple will appear in the Jubilee Party episode on Thursday June 2.

EastEnders airs weekdays from 7:30pm on BBC One.