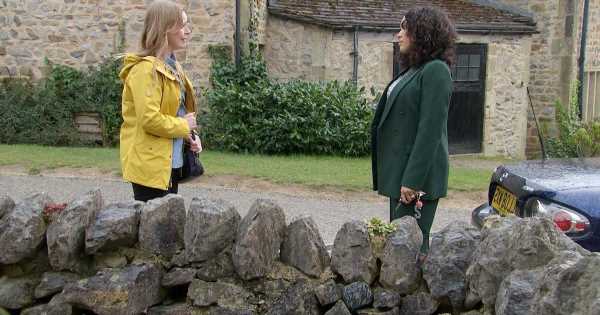 Suzy (Martelle Edinborough) and Vanessa (Michelle Hardwick) almost spilt up after Suzy lies about knowing Holly. Unsettled that her secrets nearly derailed her new relationship, Suzy tells Leyla (Roxy Shahidi) she’s going to be clean from now on. Leyla worries where her next coke fix will come from.

With his court hearing approaching, Noah (Jack Downham) thinks about doing a runner. Sarah persuades him to face the music, but as the day arrives, will he plead guilty?

Moira takes Faith (Sally Dexter) to her hospital appointment. She urges Faith to tell Chas (Lucy Pargeter) and Cain (Jeff Hordley) about her diagnosis, but Faith wants to keep it secret. As she leaves, however, she bumps into Wendy. Is her secret about to be revealed?

And love is in the air as David (Matthew Wolfenden) decides to propose to Victoria. Pollard pleads with him not to rush, but David is already heading to town to buy the ring. But is Victoria ready to be the third Mrs Metcalfe. If not, David could be facing humiliation…

Meanwhile Lydia is planning to buy a top of the range caravan. How will she react when Sam (James Hooton) picks up an old motorhome from the scrapyard, determined to do it up? Lydia should know by now, that’s the Dingle way!

Knowing that she’s lied to Vanessa about Holly’s death, Suzy thinks Vanessa’s better off without her – leaving her girlfriend stunned.

As the legal advisor reads out Noah’s charges, he asks Noah what he pleads. What lies instore for the troubled teen?

Charity and Mackenzie wait anxiously to hear what path Noah will take. Is she going to regret the action she’s taken?

At the hospital, Moira urges Faith to tell her kids about her diagnosis – fearing Cain will lose his temper knowing that she kept a secret from him. Trying to be strong, Faith tells Moira to head back to the farm.

Pollard implores David to take his time and not rush into anything with Victoria. But David wants him to mind the shop – as he’s seen the perfect engagement ring at the jewellers in town.

When Victoria arrives to his romantic surprise in the woods, David is bursting with excitement. As he goes down on one knee and proposes, Victoria’s left speechless but how will she respond?

For all the latest cast updates and juicy Emmerdale spoilers, sign up to our daily OK! Newsletter. Emmerdale continues weekdays at 7.30pm on ITV.