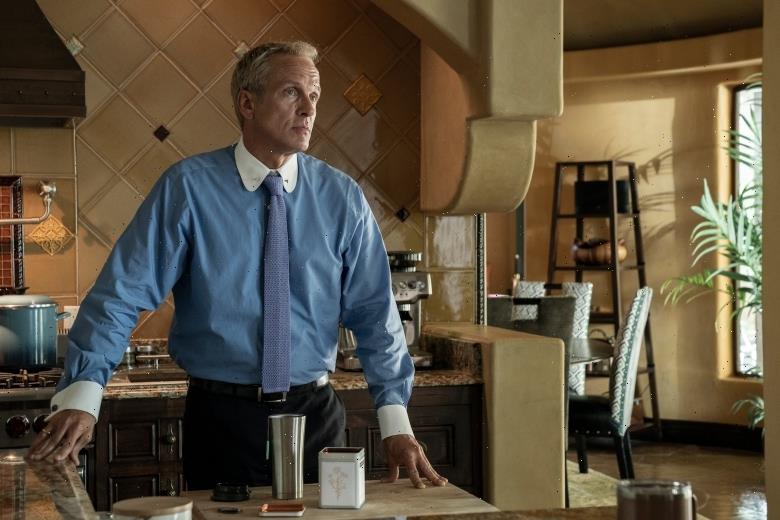 Ah! There’s the cork. The tour through Chez Goodman that began Season 6 rounded out with a lingering shot of a wayward Zafiro Añejo bottle topper, tantalizingly vague about how that hunk of metal tied into the fates of Jimmy McGill (Bob Odenkirk) and Kim Wexler (Rhea Seehorn). In “Axe and Grind,” we get a tiny hint about whether that cork was one already kept in triumph or one kept as a reminder of a massive regret. While Jimmy’s purchase of celebratory tequila is undoubtedly premature, it is a nice full-circle moment as we head toward next week’s midseason finale. Kim and Jimmy aren’t the only ones who’ve been working to lay the groundwork for a big day.

This is an episode bookended by Kim Wexler Car Moments. What starts out as a cold open that seems to explain Kim’s ever-changing relationship to law and authority becomes instead the idea that she’s always lived with the realities of the misdirect. It’s a helpful technique that her future husband will perfect, distracting an intended target with a shiny object while (at least in most cases) metaphorically picking their pocket. In this flashback, we see Kim’s mom — not only teeing up some of Kim’s later insecurities but showing where she picked up an entire way of talking — pretending to berate her for stealing jewelry from a department store.

Since nothing on “Better Call Saul” is at it seems, it only takes a mischievous grin and a dour kid to piece together that the whole thing was a setup to prey on the store manager’s gullibility and generosity. (For anyone looking to dig into a similar tale in short story form, check out Laura Lippman’s recent collection “Seasonal Work.”) As the two drive away, there’s a wink and a nod to Duran Duran song “The Reflex,” possibly hinting at how much an impressionable kid could absorb that into their DNA, maybe manifesting itself decades later in the midst of a reputation-nuking scheme of which they’re a co-architect. But there’s one notable Simon Le Bon-belted line from that song that is notably absent from that car ride: “Don’t wanna be around when this gets out.” Whatever the people in “Axe and Grind” have put in motion, this is almost certainly a chain of events destined to have all of them experiencing the consequences up close.

Chief among them is the guy who just last week was giving his adopted rival a literal invitation to punch him in the face. Whether it’s because it’s coming in close proximity to a few weeks of “Gus around the house” scenes or because it’s directed by Giancarlo Esposito himself, there’s a very Gus-like precision to Howard Hamlin (Patrick Fabian) and his brewing technique. Making a peace(-sign) offering of a foamy coffee for his estranged wife Cheryl (Sandrine Holt), you can see the newfound sense of determination that’s slowly curdling into menace with each passing episode. That big smile and knit tie is only going to cover up so much before “I’m handling it” seems more of an all-out threat than a reassurance. (Credit to Denise Pizzini and the production design team for making the Hamlin kitchen feel empty in an all-too-appropriate way.) 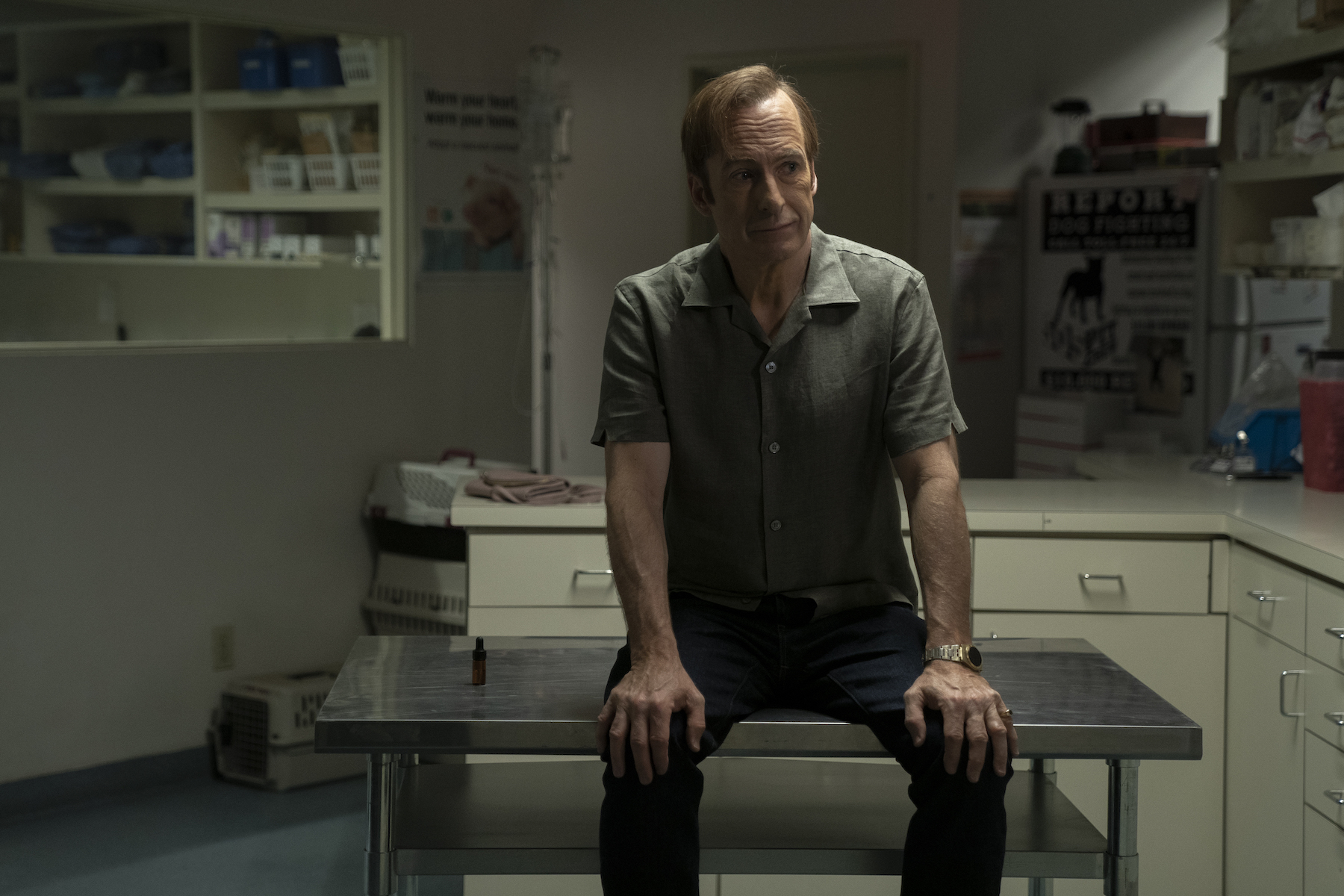 Howard’s target just so happens to spend much of his time this episode in the company of his go-to accomplices, including local veterinarian (and fixer of more than just cute fluffy pups) Dr. Caldera (Joe DeRosa). Between the roughly annual arrival of him and the UNM film students, “Axe and Grind” underlines a key difference between Howard and Jimmy’s approaches. Howard is paying for the services of one man, a PI hired over the course of an extended period of time to do his one job well. Jimmy has a veritable odd-job Rolodex of people where favors are as much the currency as the cash passed (presumably) under the table.

It’s the schmoozer vs. the suit with deep pockets. One can call on a guy like Huell for a Rube Goldbergian car theft, while the other puts all his attention on the one lead he’s sure will prove fruitful. One finds out about Caldera’s black book, but has to wonder what it would be like to have the money of the other one, the funds to buy/decode it. (The vacuum store business card is a nice tribute to the late Robert Forster, the one guy who feels missing from this farewell tour of ancillary folks, even if “El Camino” already gave him the perfect sendoff. That moment, however sweet, is still the one from this season that’s felt most like something from an Albuquerque Cinematic Universe.)

One guy who has both charm and wealth? Lalo Salamanca (Tony Dalton), who continues his unconventional tour across Germany by visiting Casper (Stefan Kapičić), one of Werner’s former employees, hellbent on getting answers about what Gus is building under the laundry room. Though his ankle-slicing technique is mostly a means to an interrogation to come, it’s another example of Lalo surviving as far as his quick-thinking, practical execution of his instincts take him. Gun drawn, he simply strolls over to Casper’s work shed. That’s the confidence of a man who’s never lost a life-or-death showdown.

If there’s a match for Lalo’s for supernatural confidence, it’s Mike’s (Jonathan Banks) diligence. One of the concerns at the outset of “Better Call Saul” was whether Mike would have any room to really grow or change. Watching from a safe distance as his granddaughter — “a lonely child, just waiting by the park,” if you will — scans the night sky without him there, you can see that the show gets just as much out of him being the man watching everyone change around him, helpless to get involved. While he’s off in “Tennessee,” the time he still has left with what family he has left is slipping through his fingers, all as he’s as close as he can be to them without turning them into more collateral damage. 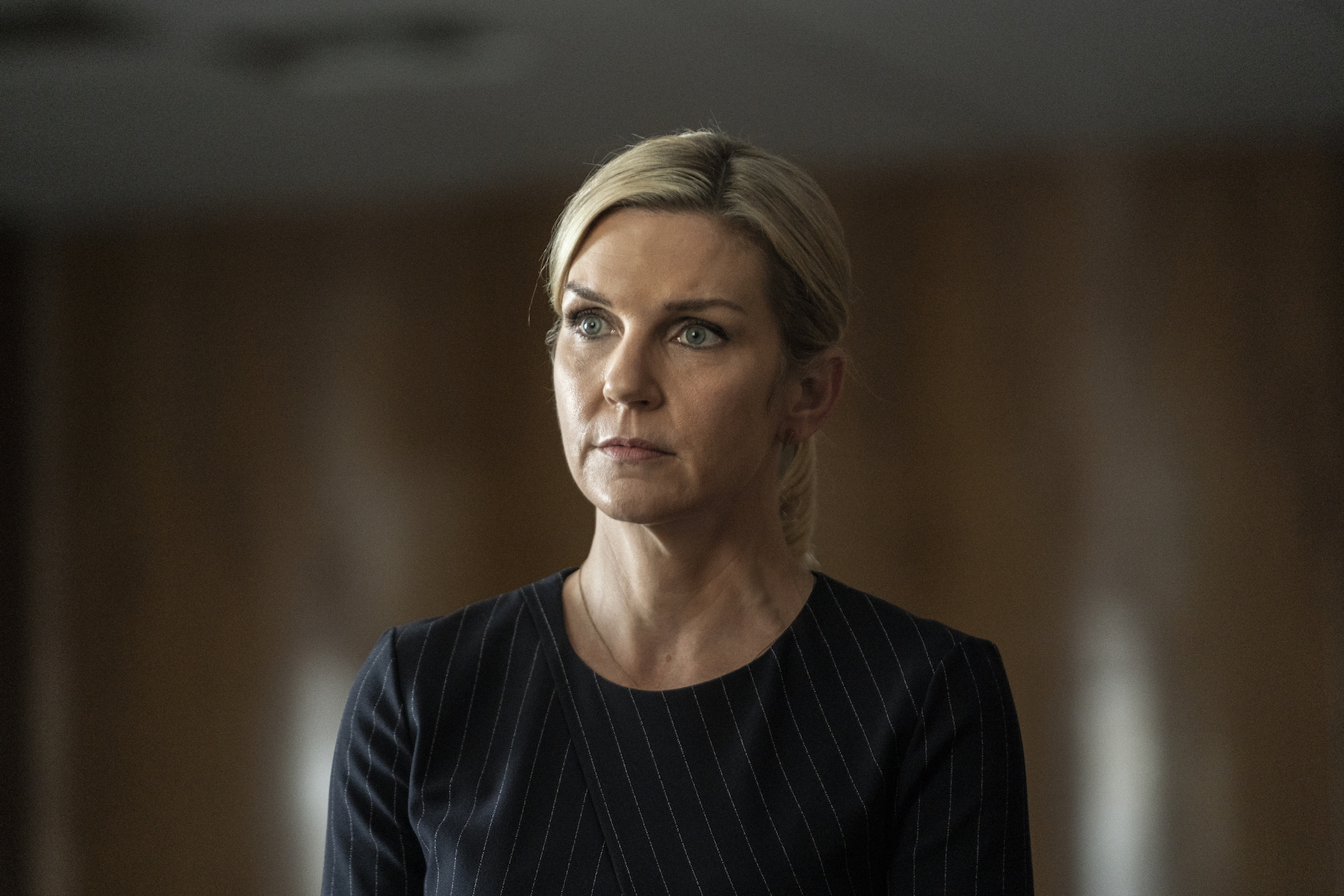 Season 6 of “Better Call Saul” has existed in a bit of temporal haze this season, with the urgency of Lalo’s globe-hopping revenge tour butting up against the deliberate, patient long game of Kim and Jimmy’s machinations. The tiny signifiers that writer Ariel Levine peppers throughout the episode — the length of the private investigator’s tour of duty, enough time passing to get some fancy stenciling and interior decor done at Saul Goodman HQ but not so much time that Kim wouldn’t have bumped into Francesca (Tina Parker) yet — help to show how things in this world move quickly and deliberately somehow at the same time. That’s a dissonance that maybe is the final straw for Kim at the episode’s close. If you’re in a situation where you feel unmoored from both a potential future and a confusing present, you might still pull the trigger on a plan doomed by an unforeseen broken arm.

The unspoken thing about using “D-Day” references that Jimmy never truly acknowledges is that a whole lot of people died on those beaches. He and Kim have been so focused on the victory that the cost has always been pushed to a secondary concern. It’s why Kim chucked the 2nd Best Lawyer mug into a dumpster. It’s what’s led the two of them to compartmentalize how many people have been wrangled into this two-person fantasy, reduced to Post-it Notes on a board in a living room. Maybe that’s what crosses through his head when Jimmy sees that their falsified proof (oddly similar to the covert photos taken by Howard’s man) is now worthless. Maybe Kim’s parting comment of “It happens today” comes from a place of not being able to overlook those things anymore.

With Kim’s hands on the steering wheel, not just soaking in misguided parental advice from the passenger seat, she flips one majestic shoulder-crossing U-turn, heading away from a surefire job offer in Santa Fe and toward a plan that she and Jimmy both know might be well on its way to failure. The episode’s closing moment soaks in the physicality of that decision, of Kim actively choosing to turn her back on an opportunity she may not have really wanted in the first place. Just like the wide shot of Kim and Jimmy walking away from the nascent bones of the Goodman law offices, Esposito offers an above-it-all view of a fateful decision that’s hard to look away from. When “Better Call Saul” closes out its final season’s opening half next week, whatever’s coming will be inescapable in its own way.

“Better Call Saul” airs Monday nights at 9 p.m. on AMC and is available on AMC+.