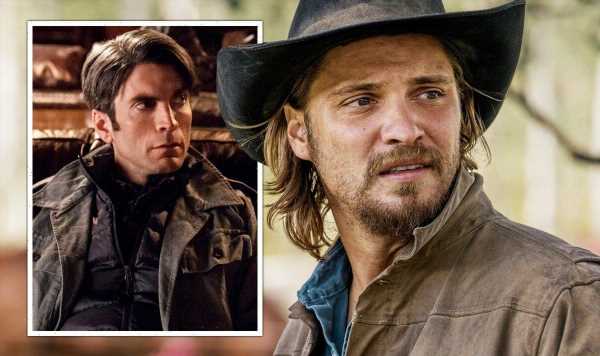 Jamie Dutton (played by Wes Bentley) uncovered a huge family secret in the third season of Yellowstone when he discovered papers proving he had been adopted, and wasn’t actually the biological son of ranch owner John Dutton (Kevin Costner). Although he struck an allegiance with his biological father Garrett Randall (Will Patton), he’s still considered a brother for life by his younger sibling Kayce (Luke Grimes).

Luke has recently weighed in on whether or not he thinks Kayce found out about Jamie’s adoption at the same time.

At the end of season three, Jamie goes to his brother for help and realises he’s unsure where they currently stand.

Jamie asks: “I need some advice, brother… if I can still call you that?”

To which Kayce responds: “Till the day you die, you better never call me anything else.”

Some viewers have interpreted this exchange to mean Kayce also knows about the adoption.

However, there has yet to be a scene in which Kayce finds out or is told about Jamie’s revelation, so there’s a small chance he’s still blissfully unaware about his relation to his brother.

In a recent interview, Kayce reasoned: “Well, the way that I said that line kind of implied that even though I know what I know now, you’re still my brother.”

Although Kayce isn’t shown finding out about Jamie’s adoption, it’s easy to assume he was told about it at some point off-screen.

With their sister Beth (Kelly Reilly) already desperate to drive him out the family, it can safely be assumed she let the whole family know about Jamie’s discovery at some point.

“That’s how I sort of interpreted that,” Luke confirmed to the Hollywood Reporter.

“Even though there is no scene written where Kayce discovers this.”

It’s safe to assume Kayce knows he and Jamie aren’t biologically related and, thankfully, this hasn’t seemed to have affected their close bond going forward.

Although, some suggestions from Luke could threaten to destroy that bond if Jamie realises Kayce has known the truth this whole time.

While Beth seemed just as surprised as Jamie to discover his true birth status, could John have trusted Kayce with the knowledge he wasn’t his brother’s biological father?

Luke continued: “I just feel like when the entire audience discovered it, it wasn’t something that he was totally in the dark about.”

Even if he does know now the truth, Kayce is hopeful his new life away from the ranch won’t weaken the trust he and Jamie have built with each other over the years.

“And it’s funny you ask because I could be completely wrong about that,” Luke said.

“But the line always felt to me like, ‘I know, but it doesn’t change the fact that we grew up together. I love you and you love me. This is stronger than biological stuff’.”

As for where Kayce is headed in season five, Luke admitted: “Honestly, I 100 per cent do not know. I haven’t read a script yet.

“We start in a few weeks, so I’ll probably start getting scripts right before we show up. That’s usually the drill.”

As production is getting underway slightly later this year, fans may have to sit tight a little longer before the explosive Dutton saga begins its next chapter.

Yellowstone seasons 1-4 are available to stream on Peacock in the USA. Seasons 1-3 will premiere on Paramount Plus in the UK later this year.