When the cast and showrunners of “Yellowjackets” took the stage at IndieWire’s Consider This FYC Brunch, everyone in the room wanted to learn the secret sauce behind the Showtime blockbuster. But the team made sure to emphasize that there was no single thing that set the show apart. Instead, the show succeeds because of how it delicately balances multiple aspects of the series that seemingly contradict each other. (Full videos of all five panels will be published next week.)

“Tonally, I think we were all wondering if the filaments would come to the magnet,” said executive producer and co-showrunner Jonathan Lisco while speaking on a panel moderated by IndieWire editor-in-chief Dana Harris-Bridson. “Because there’s a lot of different tonalities in here, which we thread together into this single impact on our audience.”

The “Yellowjackets” team wasn’t alone in juggling that problem. A common topic at the brunch was fusing multiple thematic elements into something coherent. Whether it was working within multiple genres or jumping back and forth between timelines, each show had to embrace unique challenges in order to create something bigger than the sum of its parts. “Outer Range” had to find a happy medium between two seemingly unrelated genres, science fiction and westerns. “Pachinko” spans three countries and nearly eighty years. “The Staircase” had to skip between two timelines while mixing fact and fiction. And “Pam & Tommy” primarily focused on a moment at the intersection of two major eras in American culture, forcing its team to clearly illustrate the difference between them while staying focused on its main characters’ arcs.

On the “Outer Range” crafts panel moderated by IndieWire’s Jim Hemphill, everyone agreed that genre was top of mind while working on the show. Specifically, everyone was thinking about the question of how to combine westerns and science fiction into something unique.

“One thing that we immediately decided was not to go into any genre too heavily,” said composer Saunder Jurriaans. We could score the show as a Western, we could score it as a sci-fi, but what we decided was to take a middle ground and not go with either.”

While the team had to work hard to pull off the fusion of genres, they believe the audience ultimately has to put in some effort to understand the show as well.

“It’s such a bonkers show,” said director and executive producer Lawrence Trilling. “It’s asking you as the audience to do so many things. To be pulled into the mystery and into the design and then laugh at some of the tongue in cheek stuff. To actually have an emotional connection with these characters and care what happens to them in this totally unique and bizarre world.”

Perhaps no show had more elements to combine than “Pachinko,” Apple’s sprawling hit that has scenes taking place everywhere from South Korea in the 1910s to Tokyo in 1989. The show often ties the different eras together with subtle homages that you might miss if you look away at the wrong time. But for the show’s team, that’s a feature, not a bug. They determined that the only way to pull off such an epic project was to have faith in their audience.

“This show is in three different languages. It is about the past of Korea. It is about immigration to Japan. These are all topics that you may not necessarily see on television or on screen or film,” said executive producer Theresa Kang-Lowe. “The intention of the show was to treat the audience [with respect]… the audience is smarter than us, actually. So we don’t have to reveal everything.” 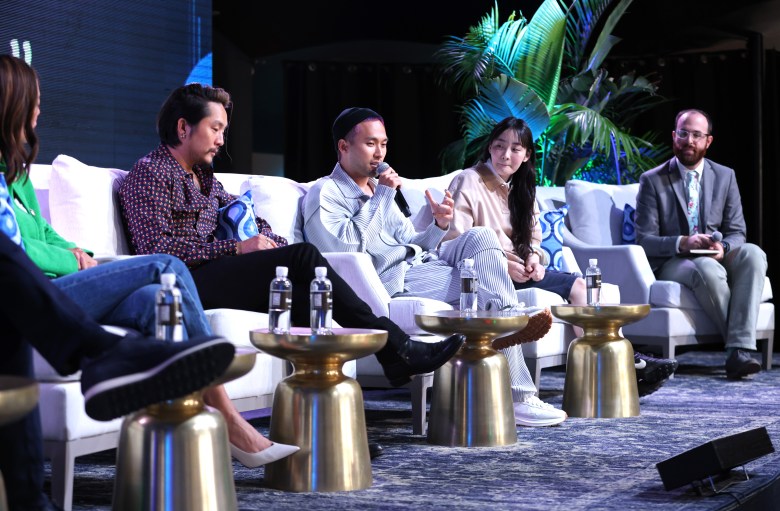 “The Staircase” had a similar challenge, as it skips back and forth in time between 2001, when Kathleen Peterson was still alive, and 2017 when her husband is on trial for murdering her. But the team was adamant that those timelines had to be merged into something coherent.

“The approach to the script’s world was that, if you were to remove all the dates and read it all the way through, the energy and the themes and the character arcs would read as if it were all in the same time period,” said writer and co-showrunner Maggie Cohn, who went on to praise her crafts team for finding the parallels between the eras. “So that further puts the onus on our department heads to provide that distinction, and hopefully provide that clarity for you.”

“Pam & Tommy” had to deal with the fact that, despite taking place during the Internet’s infancy, it is fundamentally a story about what would become Internet celebrity culture. Because Pam Anderson and Tommy Lee’s sex tape was leaked just as the World Wide Web was starting to take hold, the team essentially had to straddle two cultural moments to make it work.

“We just immediately go to this thing in our pockets and figure everything out. And that didn’t exist then,” said co-showrunner D.V. DeVincentis, adding that the significance of the story meant the writers had to be careful to combine the pre and post-Internet eras into one story. “This story is integral in the moment when things started to just switch and we became what we are now.”

All five shows ultimately succeeded at their tasks, fusing multiple elements to make television that is truly unique. On each panel, collaboration between departments was emphasized as an essential part of the creative process, with showrunners communicating a clear vision and department heads applying impeccable craftsmanship to complete it. Then once the shows were completed, they simply had to trust that their audiences would be smart enough to understand the work they did. It all came down to trust. Trust in their viewers, and trust in each other.