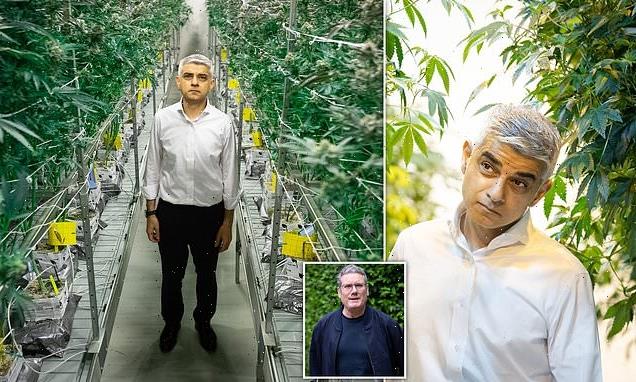 Sadiq Khan has visited a cannabis farm in Los Angeles as he announced the formation of a new group to look at decriminalising the drug in Britain.

In a move which puts him on a collision course with Labour leader Keir Starmer, the Mayor of London said former justice secretary Lord Charlie Falconer QC will be the chair of the first London Drugs Commission, which will assess the effectiveness of UK drug laws.

Sir Keir insisted in January he was against softening the law after it was revealed a proposed pilot programme would see young adults caught with the Class B drug offered speeding course-style classes or counselling instead of arrest.

LA decriminalised cannabis in 2016 after which arrests related to the drug in California dropped by 56%.

The commission being launched by Mr Khan – a manifesto pledge during last year’s City Hall elections – will examine the effectiveness of UK drugs laws, with a particular focus on cannabis, but will not consider class A drugs.

Cannabis is currently classed as a class B drug, with a maximum sentence of five years in prison for possession.

Though advocates say it can make people feel happier, sceptics warn that regular cannabis use increases the risk of developing a psychotic illness. Results from European neighbours offer an insight into the potential pitfalls of the policy – with Portugal seeing a huge surge in cannabis-induced psychosis after it decriminalised the drug in 2001.

In January, King’s College London professor Sir Robin Murray said around a third of the psychosis patents he sees at his practice in south London are mostly young people suffering from debilitating paranoia and hallucinations caused by use of high-strength skunk. 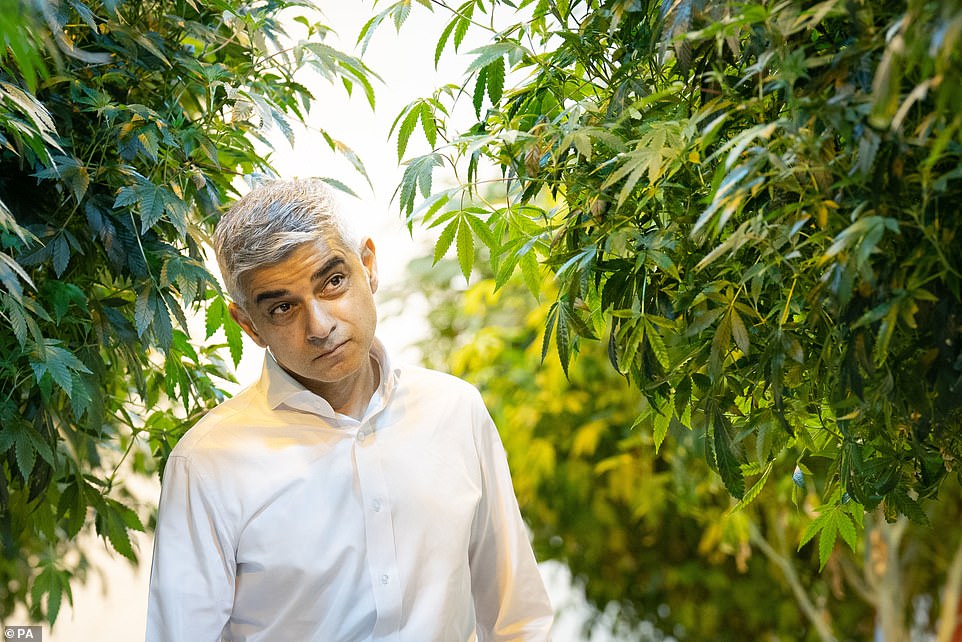 Mayor of London Sadiq Khan walks through cannabis plants which are being legally cultivated at ‘Traditional’ a licensed factory in Los Angeles, Wednesday May 11, 2022 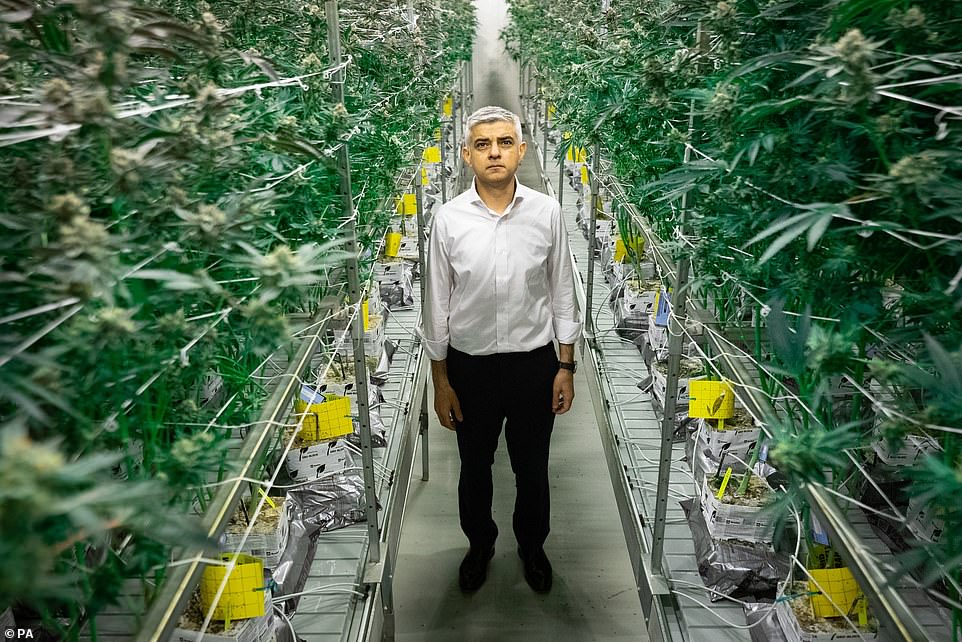 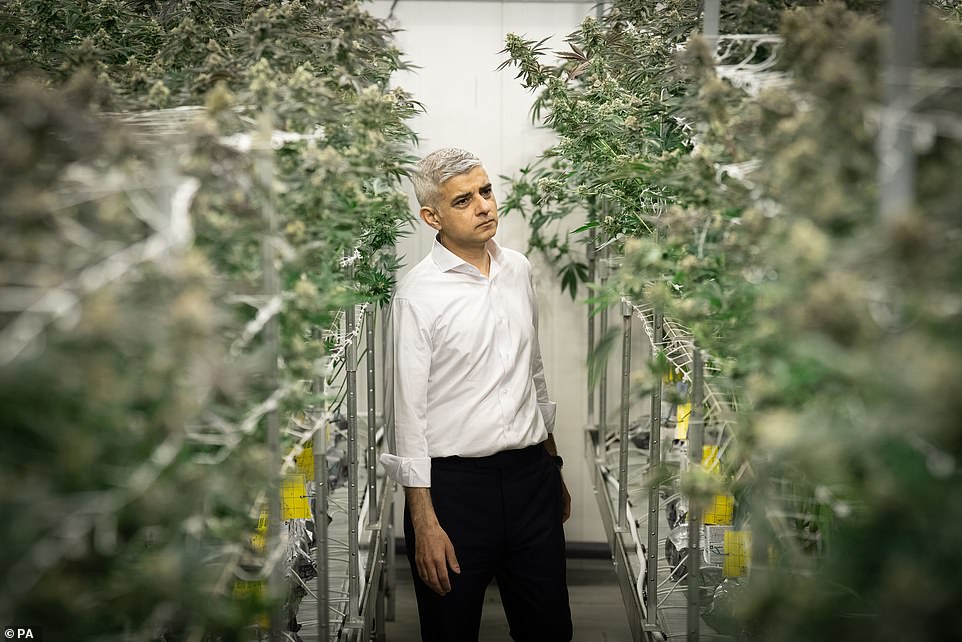 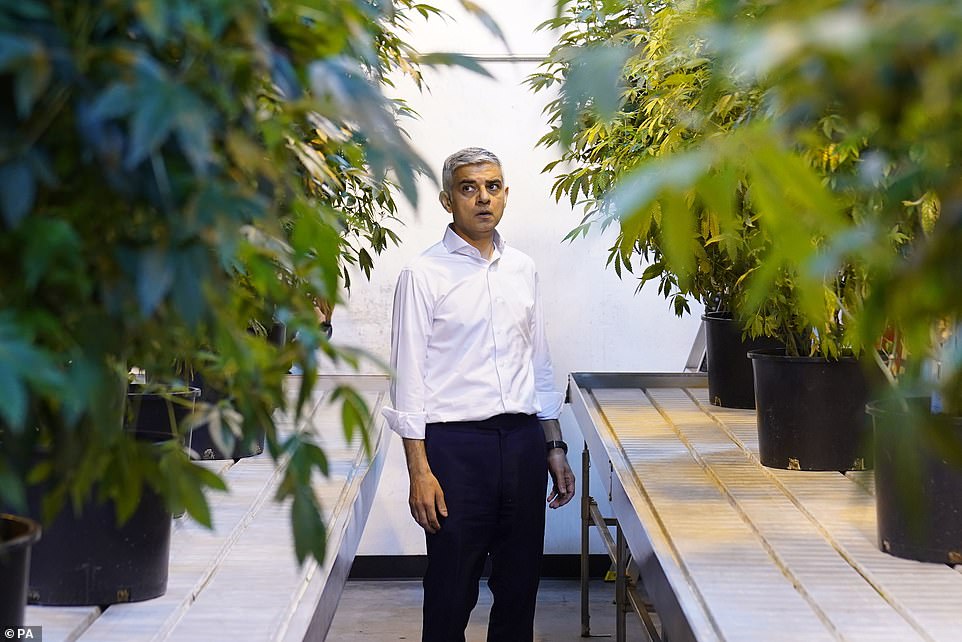 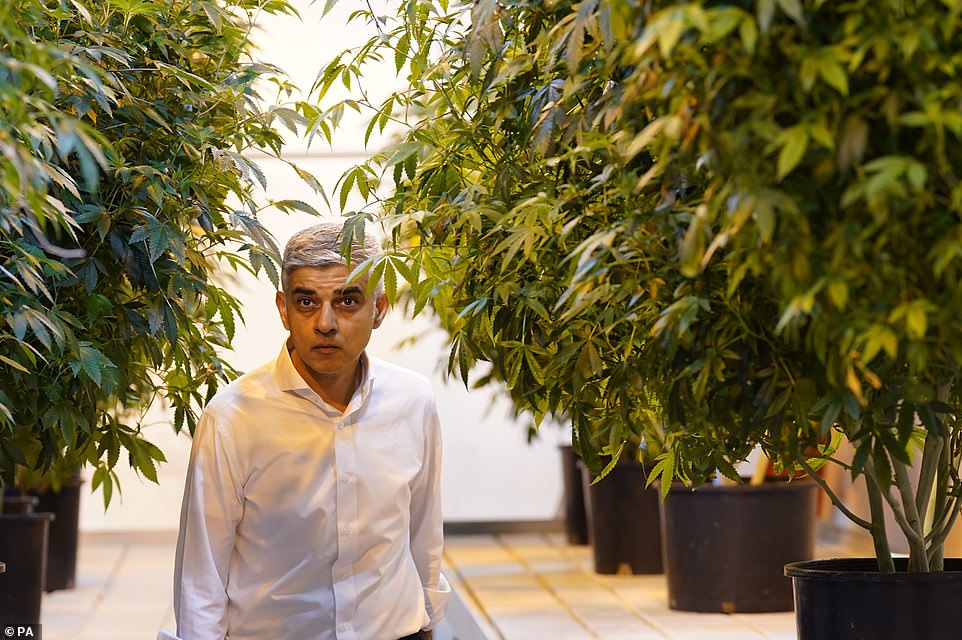 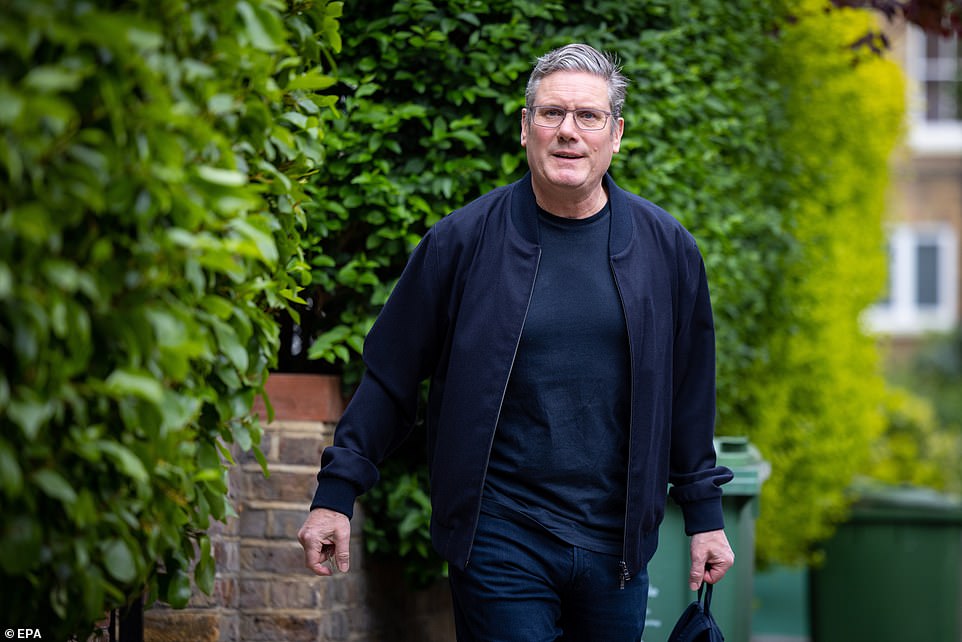 Cannabis (also known as marijuana, weed, pot, dope or grass) is the most widely used illegal drug in the UK.

The effects of cannabis can vary a lot from person to person. It can also vary depending on how much or how often it’s taken and what it contains.

Regular cannabis use increases the risk of developing a psychotic illness, such as schizophrenia.

The risk of developing a psychotic illness is higher in people who: start using cannabis at a young age; smoke stronger types, such as skunk; smoke it regularly; use it for a long time; smoke cannabis and also have other risk factors for schizophrenia, such as a family history of the illness

Cannabis also increases the risk of a relapse in people who already have schizophrenia, and it can make psychotic symptoms worse.

Other risks of regularly using cannabis can include: feeling wheezy or out of breath; developing an uncomfortable or painful cough; making symptoms of asthma worse in people with asthma; reduced ability to drive or operate machinery safely

If you drive while under the influence of cannabis, you’re more likely to be involved in an accident. This is one reason why drug driving, like drink driving, is illegal.

Sir Robin suggested the high number of cases in his practice are now impacting the facility’s ability to care for patients.

He told The Times newspaper: ‘I think we’re now 100 per cent sure that cannabis is one of the causes of a schizophrenia-like psychosis.

‘If we could abolish the consumption of skunk we would have 30 per cent less patients [in south London] and we might make a better job of looking after the patients we have.’

Running from Maudsley Hospital in Camberwell, south London, patients are typically seen for a minimum of 15 weeks, with treatment including one-on-one sessions with specialist therapists.

The aim of the clinic is to first help cannabis users wean themselves off the drug before helping them to manage without it – helped by weekly group therapy sessions with fellow patients and experts.

Sir Robin has praised the clinic, reporting it to be a success, even when services moved online due to the Covid pandemic.

It comes as Mr Khan continued his four-day tour of the US, which has included visits to New York, San Francisco and LA and saw him chat with late-night TV host James Corden and Love Actually director Richard Curtis on Wednesday evening.

Yesterday he met with LA mayor Eric Garcetti, and visited a cannabis dispensary and farm in the city to see what lessons could be learned in the UK in responding to the challenges of drugs.

Speaking at the Traditional cannabis dispensary and cultivation centre in downtown LA, Mr Khan said that an ‘honest, open’ conversation was needed about UK cannabis laws, adding that visiting the facility had been ‘fascinating’.

‘We need to have an honest, open conversation about the evidence in relation to the history of cannabis and our laws in the UK and our experience of the health consequences in relation to crime and the community,’ he said.

‘The best way to do that will be with the drugs commission we’ve now set up.

‘You can hear from the experts, that’s one thing, but seeing it for yourself… hearing from those who cultivate and grow this plant has been fascinating.’

On his opinion of the facility, he continued: ‘[It] is quite clearly heavily regulated, there are really high standards, no corners are being cut, they’re readily inspected by the city, by the experts.

‘It’s important to see for ourselves what the parallel world of legalised cannabis looks like as a compare and contrast.

‘What I hope the London Drugs Commission will do is look [at] what happens elsewhere in the world where the laws have been changed.’

Kika Keith, owner of the shop, said the decriminalisation of cannabis in the UK would ‘tremendously help’ London’s black community.

‘The people of colour in London should have opportunities to learn about the workforce opportunities, the entrepreneurship … it should really be a diversified industry,’ she said. 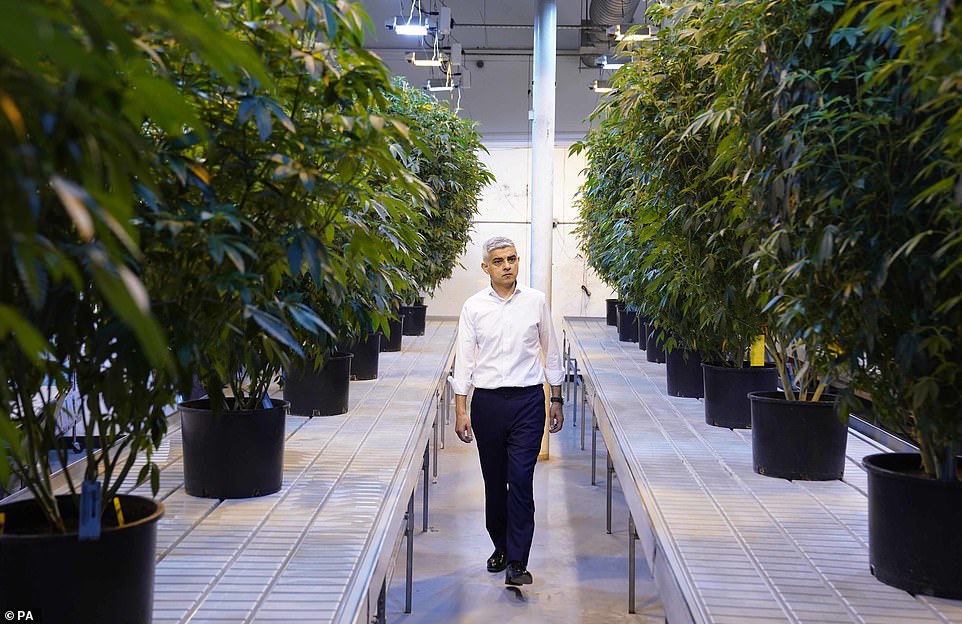 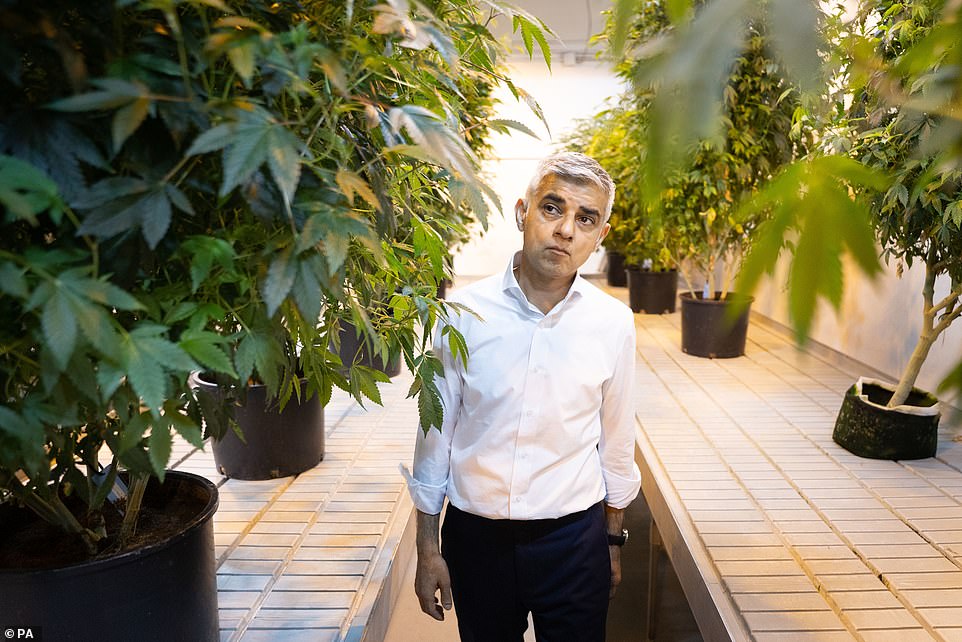 Mayor of London Sadiq Khan walks through cannabis plants which are being legally cultivated at ‘Traditional’ a licensed factory in Los Angeles, May 11, 2022 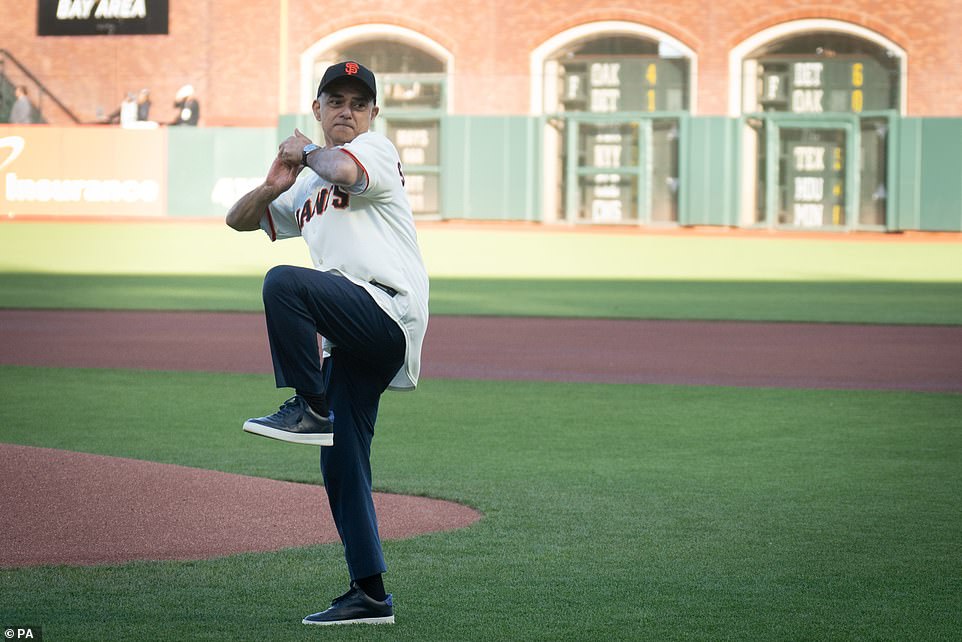 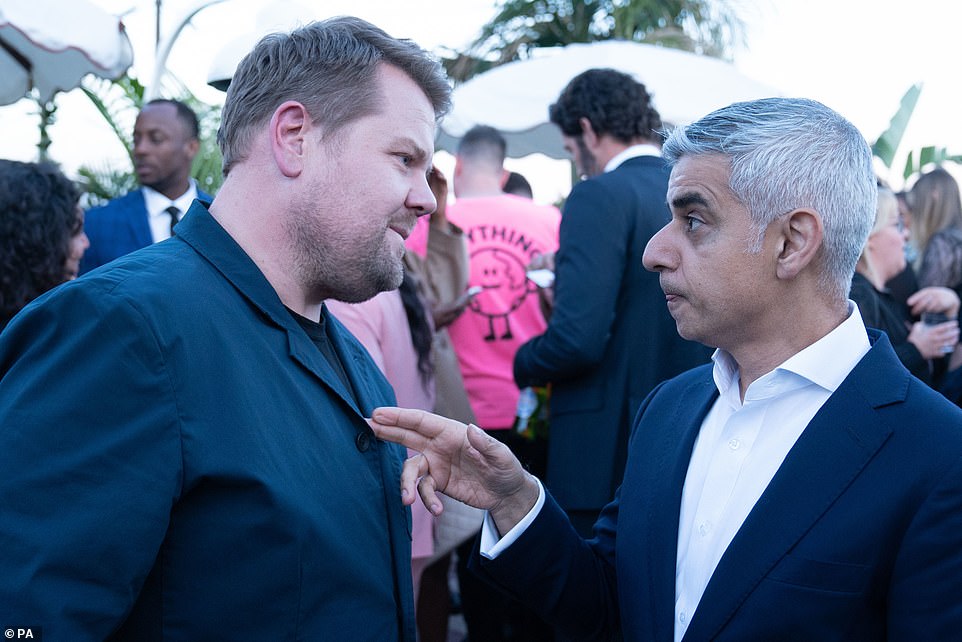 Mayor of London Sadiq Khan talking to late-night TV host James Corden at a reception for the creative industries hosted by the mayor in Hollywood, Tuesday May 10, 2022 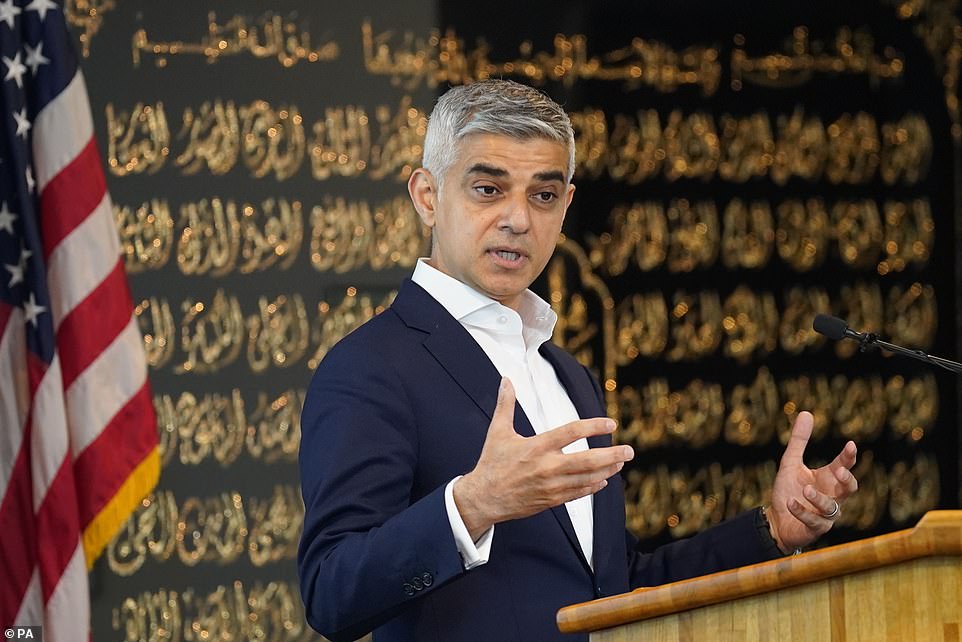 Mayor of London Sadiq Khan speaking during a visit to the Islamic Centre of Southern California in Los Angeles, Wednesday May 11, 2022 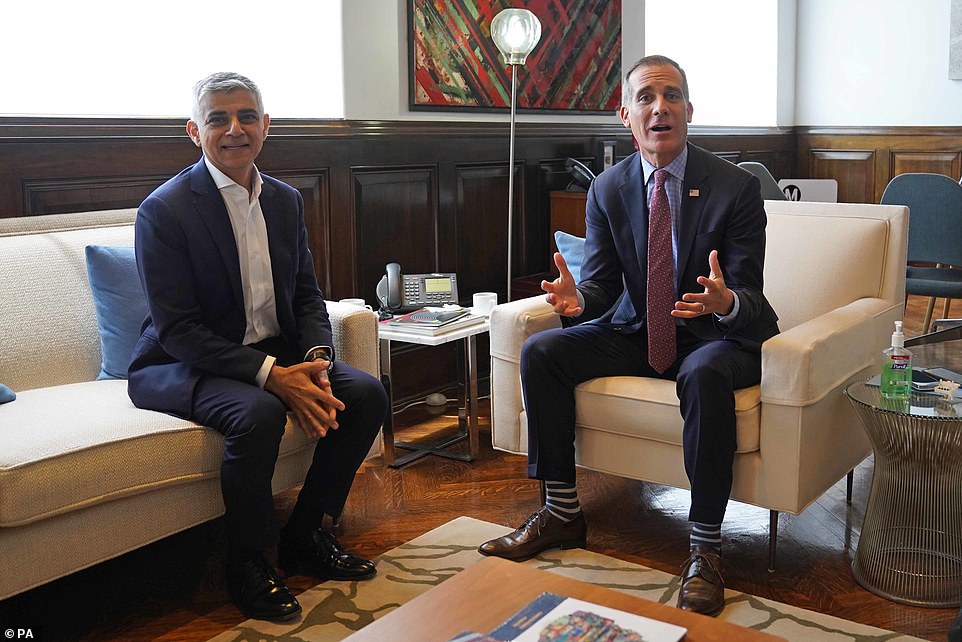 Ms Keith, who is the first black female owner of a cannabis shop in LA, added: ‘The cannabis industry is the fastest-growing workforce, it gives us the opportunity to get into new jobs, new careers that were never established.

‘It gives us opportunities for ownership and … it’s a real opportunity to build communities if we do it in the right way.’

The mayor’s visits form part of a ‘fact-finding mission’ to investigate an international evidence-based approach to reducing drug-related harm in the capital.

University College London has been appointed to provide world-class evidence-based research and assessment to the Commission on the criminal justice, health and economic implications for any potential change in policy.

Mr Khan said Lord Falconer would bring ‘decades of experience’ to the role as head of the body and that more needed to be done to tackle the ‘epidemic’ caused by the illegal drug trade.

Lord Falconer said: ‘I’m honoured to have been appointed chair of the London Drugs Commission.

‘It is a real opportunity for there to be a thorough look at the effectiveness of our drugs laws and policy on cannabis.

‘We need rigorously to identify what is the best approach to reduce harm to our communities. A national debate is long overdue.

‘We aim to make recommendations to bring about effective and lasting change.’