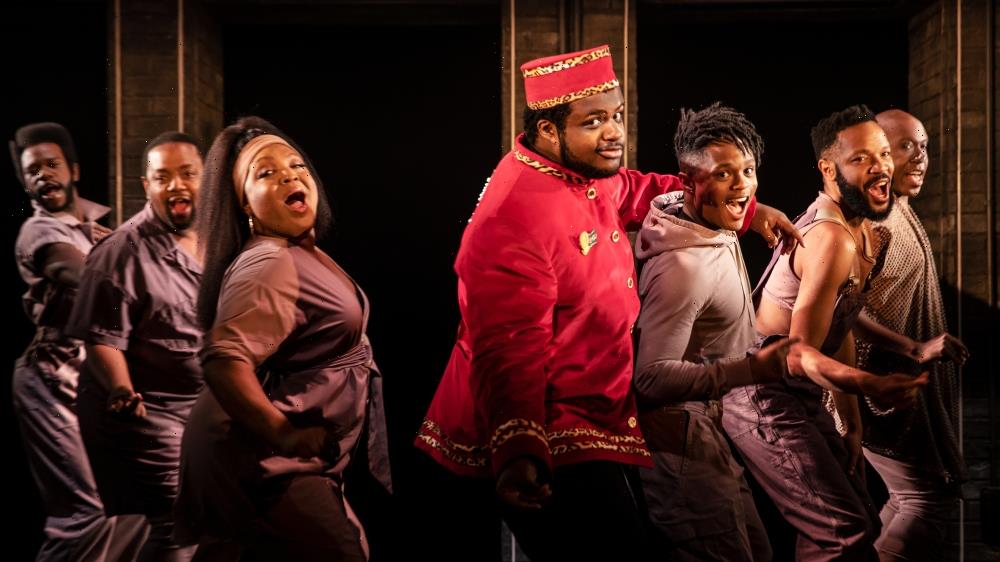 “A Strange Loop,” an extremely meta musical, dominated the nominations for the 75th Tony Awards on Monday. The show, which won a Pulitzer Prize in 2020 for its Off-Broadway run, scored a leading 11 nominations.

“A Strange Loop” was followed closely behind by “MJ,” a jukebox musical featuring the music of Michael Jackson, and “Paradise Square,” a look at the Five Points area of Manhattan and the tensions that erupted in the violent Draft Riots of 1863, which both nabbed 10 nominations. “MJ” has battled controversy for failing to engage with allegations that Jackson molested children. “The Lehman Trilogy,” a sprawling drama about one of the financial institutions that helped spark the 2008 recession, received 8 nominations, the most of any play.

Other major contenders include “Company,” a gender-swapping re-imagining of the Stephen Sondheim classic, which picked up 9 nominations and “Six,” a feminist retelling of the story of Henry VIII’s six wives, that received 8 nominations.

The nominations are welcome news for both “Paradise Square” and “A Strange Loop,” which were punching up against more star-driven Broadway shows and could receive a lift in ticket sales. Best musical will be a race between those shows, as well as “MJ,” “Girl From North Country” and “Mr Saturday Night.” Best play is a battle between “Clyde’s,” “Hangmen” “The Lehman Trilogy,” “Skeleton Crew” and “The Minutes.”

The best musical revival category includes “Company,” as well as “Caroline, or Change” and “The Music Man,” a star-studded revival of the Meredith Willson chestnut that has become one of the year’s hottest tickets. Best revival of a play is a contest between “American Buffalo,” “for colored girls who have considered suicide/when the rainbow is enuf,” “How I Learned to Drive,” “Take Me Out” and “Trouble in Mind.”

This year’s crop of contenders includes several Hollywood stars, including Hugh Jackman, recognized for his turn as a con man in “The Music Man,” Billy Crystal, honored for his work as both the star and book writer of “Mr. Saturday Night,” and Ruth Negga, nominated for her villainous turn in “MacBeth.”

There were also several notable omissions. Beanie Feldstein, who took on the role made famous by Barbra Streisand in “Funny Girl,” was overlooked and the revival only scored a single nomination for Jared Grimes’ supporting turn. “Plaza Suite,” a Neil Simon revival that stars real-life marrieds Sarah Jessica Parker and Matthew Broderick, earned a nod for its costumes, and nothing else. And “The Minutes,” a pitch-black satire of small-town bureaucracy that had scored some of the year’s best reviews, received a nomination for best play, but was shut out from other categories.

In the wake of the Black Lives Matter movement, Broadway has faced pressure to elevate more stories of underrepresented communities. Many of the shows singled out on Monday, such as “Skeleton Crew,” “Paradise Square” and “for colored girls who have considered suicide/when the rainbow is enuf” deal with issues of race. Often these productions approached that topic with great daring or found fresh resonance in historical texts. “A Strange Loop,” for instance, is the story of a Black queer man writing a musical about a Black queer man writing a musical, while “Trouble in Mind,” was originally slated to debut on Broadway in 1957 until its author Alice Childress refused to make changes that would have watered down its look at racism and misogny. Had it debuted when it when it was intended to, Childress would have become the first Black female playwright on Broadway.

The nominations were unveiled as Broadway is trying to claw its way back from the COVID-19 pandemic and the nearly two years of shutdowns that resulted from the public health disaster. The theater business returned in August 2021, but ticket sales have been sluggish at times and nearly every production has been forced to contend with at outbreaks of the virus in its cast. Last year’s Tonys were handed out before most theater had returned in earnest and, despite being awarded in 2021, the show honored the best of 2020, a pandemic shortened year.

And yet, in a sign of the industry’s resilience, an impressive 34 new productions opened this season — 15 of which debuted in April alone. Broadway has also signaled that it believes it is entering a new stage of the pandemic, dropping vaccine checks even as cases rise in New York City. Theaters will continue to enforce a mask mandate.

The Tony Awards ceremony will air June 12 at 8 p.m. ET, with Ariana DeBose, fresh off her Oscar win for “West Side Story,” serving as host of the telecast.

Best Revival of a Musical
“Caroline, or Change”
“Company”
“The Music Man”

Best Performance by an Actress in a Leading Role in a Play
Gabby Beans, “The Skin of Our Teeth”
LaChanze, “Trouble in Mind”
Ruth Negga, “Macbeth”
Deirdre O’Connell, “Dana H.”
Mary-Louise Parker, “How I Learned to Drive”

Best Performance by an Actor in a Featured Role in a Play
Alfie Allen, “Hangmen”
Chuck Cooper, “Trouble in Mind”
Jesse Tyler Ferguson, “Take Me Out”
Ron Cephas Jones, “Clyde’s”
Michael Oberholtzer, “Take Me Out”
Jesse Williams, “Take Me Out”

Best Direction of a Play
Lileana Blain-Cruz, “The Skin of Our Teeth”
Camille A. Brown, “for colored girls who have considered suicide/when the rainbow is enuf”
Sam Mendes, “The Lehman Trilogy”
Neil Pepe, “American Buffalo”
Les Waters, “Dana H.”

Best Costume Design of a Play

Best Costume Design of a Musical

Best Lighting Design of a Play

Best Lighting Design of a Musical

Best Sound Design of a Play