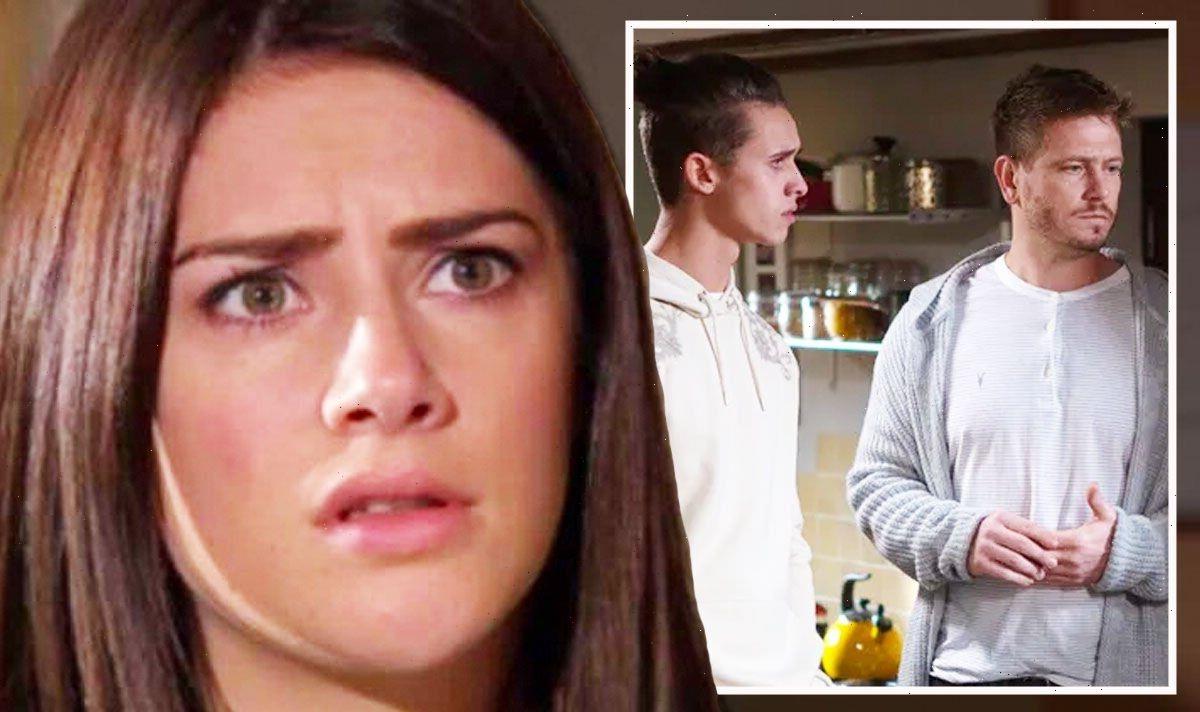 Victoria (played by Isabel Hodgins) and David (Matthew Wolfenden) are the only couple who seem to be happy at the moment on Emmerdale, having enjoyed a few months away in Spain helping Diane Sugden (Elizabeth Estensen) settle into her new home. They have both decided to become their own little family, with both characters having their own children under the age of four and therefore, they are in very similar situations. However, it is David’s eldest, Jacob Gallagher, (Joe-Warren Plant) who could tear them apart as he’s framed for a crime in upcoming scenes on the ITV soap.

Jacob has struck up a friendship with Chloe Harris (Jessica Elland) over the past couple of months, with the pair even sleeping together.

Unfortunately, this has made him the prime target for Noah Dingle (Jack Downham) to blame all his insidious behaviour on.

For months, the teenager has been stalking the girl who was supposed to be his love interest but she had her head turned by the older men in the village.

Some of the things Noah has done recently have included stealing Chloe’s house keys and taking her diary from her bedroom.

These were found in Jacob’s bag last week and this sets in stone the events which begin to spiral in this week’s episodes.

As the week begins, Jacob is still in Chloe’s bad books as she refuses to believe someone could have put her things in his bag.

This leads her into Noah’s arms, unaware he is the real culprit behind all the mysterious goings-on which have been happening.

With Jacob pleading his innocence, the young man becomes increasingly frustrated no one is believing him and he’s losing supporters by the minute.

Finally deciding to hear him out, Victoria listens to David’s stepson as he tells her about his suspicions it could be Noah.

However, this is when Victoria could start to think he is the one who has done it as she has been through her own trauma with men in the past.

A few years ago, Victoria was raped by Lee Posner (Kris Mochrie) and this resulted in the birth of her young son, Harry.

At the time, people were divided over whether they believed her and this made her feel as if she couldn’t trust anyone.

It took a while for her to build up her confidence again and even exploring relationships took some time to accept, with her first being with Luke Posner (Max Parker).

When she discovered he was hiding things from her, their romance came to an end and he left the village, which was when she started to see David in a new light.

So far, it seems Meena (Paige Sandhu) has been their only obstacle but she could see Jacob as one of the men who has treated her badly in the past.

Taking a stand with Chloe, who has been subjected to trauma by a man, Victoria could explicitly state to David she does not believe his stepson.

Knowing there is very little chance he is going to take her side, she knows this could possibly bring about the end of their relationship.

David could tell her he is going to defend his stepson all the way and if she cannot accept that, they cannot be together.

In upcoming scenes, Chloe will finally discover the truth it is Noah who has been stalking her all this time.

Unfortunately, it could be too little too late for Victoria and David to patch things up as the latter might not be able to get over the fact she saw Jacob as a threat.

David would understand Victoria would have reservations but he would have liked to have thought she didn’t see his stepson in that way.

Could their romance be over before it’s even been given time to begin and without any obstacles stopping them from being together?

Not even Noah could have predicted the extent of lying about Jacob could have possibly caused for his family, but it seems his obsession with Chloe has clouded every judgement he has made.

Speaking with Express.co.uk and other media, the actor who plays Noah, Jack, has revealed how his character is embarking on the ‘Tate’ side of his personality.

“He has the background for it as well, he has motives for it. You can see why these things have happened to him,” the actor added.

“With his past around girls and Charity and her very interesting relationships throughout him growing up, I think it’s all had a really negative effect on his perception of women and how you should act around women.

“‘I think he’s completely oblivious,” Jack continued but will Noah get the blame for breaking up Victoria and David?

After so many failed romantic relationships, will Victoria be ready to get her revenge on the youngster who could ruin her life?