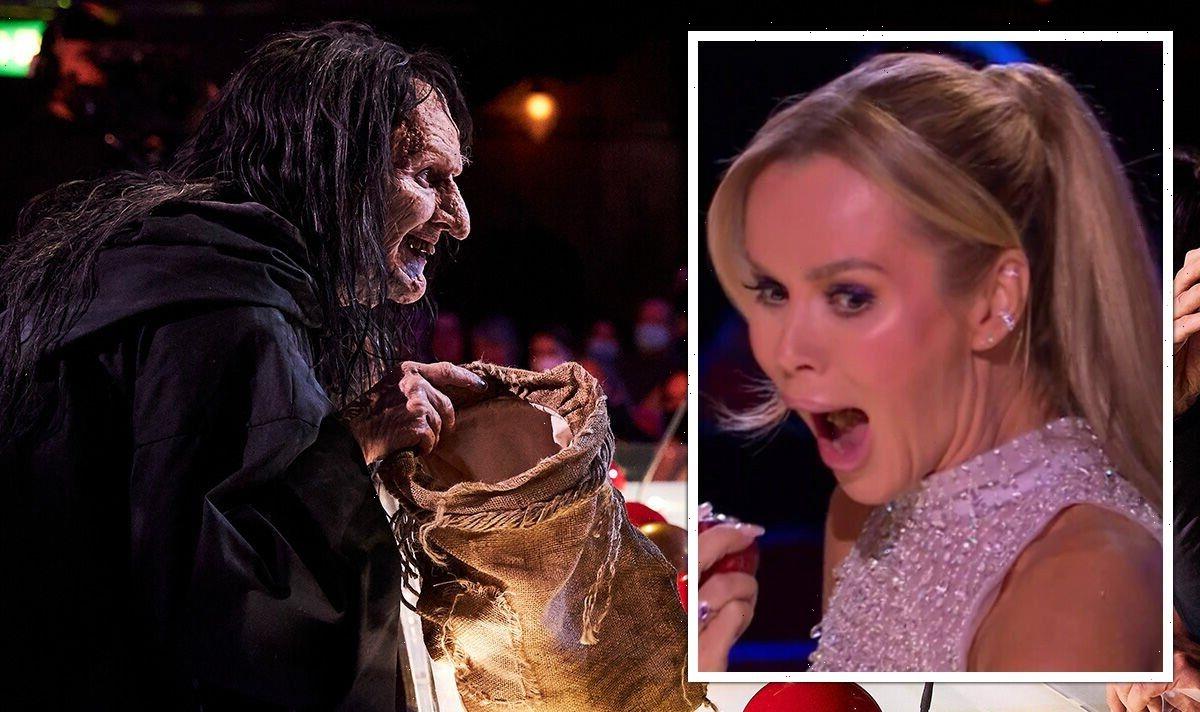 The act, which was dubbed as the “scariest act ever”, has had viewers talking ever since as many feel they have “exposed” the act for using a fake arm during their bad apple trick. During the performance, the witch was seen handing out apples to the likes of Simon Cowell, David Walliams, Amanda Holden and Alesha Dixon, one of which exploded, showering them with cockroaches and mealworms. However, eagle-eyed ITV viewers have slammed the show and felt they have figured out the secrets to the act.

Taking to Reddit, fans theorised about what they thought happened during the act and thought they saw a fake arm.

Reddit user @SilverOwl321 commented: “I could tell something was up with the apple in her right hand.

“The bad apple is at the bottom of the bag, so it would be chosen last. When it came down to the last two apples, Simon had to choose left or right.

“When he said right, the ‘witch’ was asked my right or your right. The witch would answer depending on which hand had a bad apple.

“Same thing would happen if Simon said left instead. The witch would say you left it to her to make sure the correct apple was chosen.

“It’s an easy trick, and the arm attached to the cane was a fake arm manipulated by his real arm hidden under the cloak.

“You’ll notice the fake arm attached to the cane is ‘set down’ and rests on the table when his real arm comes out, and that’s because he let go of the fake arm.

“The fake apple was probably made of wax, so easy to break, and the bugs can be kept inside of it.”

@directscion added: “The rotten apple was kept inside which has a secret opening in the bag so no other judge can pick it.

“She then puts that apple on the right hand of the judge. The other judge said ‘right’, and since the rotten apple was already on the judge’s right hand.

“She then assumes and said, ‘my right’, which is the left hand of the judge with a normal apple.”

@rewardiflost said: “Fake right arm holding the staff. Real right arm is inside the robe with another fake/loaded ‘apple’.

“That apple is broken open by the hand inside the robe. That spills out the worms. She walked away in the commotion.”

Despite the speculation, many have felt the real show mast was illusionist Marc Spelmann in a heavy disguise.

He has previously made two appearances on the show, once as himself and another as a mysterious masked character “X”, back in 2019.

Several viewers revealed it had scared their kids, with one parent saying their children were too terrified to sleep.

The judges and audience members were left in suspense when the act ended, as the witch disappeared from the stage without a trace.

They were left with the bugs on their desks, as Simon Cowell said: “Okay, well that was horrific… And the witch has turned into a cockroach.”

Wondering where the witch had gone, Amanda Holden exclaimed: “I mean, I’d quite like to see what else was going to happen…”

Alesha Dixon called the act “brilliant”, as David branded it “stunning”, with them all sending the illusionist into the next round.

Britain’s Got Talent airs Saturday from 8pm on ITV.